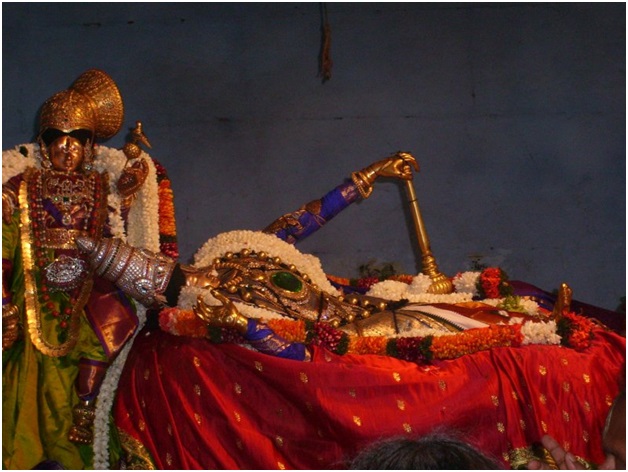 ANdAL incarnated as the only inheritor in the clan of AzhwArs. The term anju would refer to the numeral ‘five’ as well as ‘fear’. In the first interpretation it would refer to the fact that ANdAL is the only inheritor for the clan of AzhwArs just as parikshith was the only inheritor to the clan of the five pANdavas. In the second interpretation it would mean that she is the only inheritor to the clan of AzhwArs who were always fearful as to what harm would come emperumAn’s way. periyAzhwAr was always engaged in singing mangaLASasaam [to wish well] to emperumAn, wishing him to live long while all the other AzhwArs were engaged in the state of paramabhakthi (a state in which they cannot sustain themselves in the absence of emperumAn). ANdAL was engaged in mangaLASasaam for emperumAn, like periyAzhwAr, and was steeped in devotion too, like the other AzhwArs. The term pinjAyp pazhuththaL refers to the state when someone (or something) matures at a young state itself.  Normal plants would initially give rise to flower, which will become the unripened fruit and finally yield the ripened fruit. However, the plant thuLasi, even as it germinates and sprouts from the earth, will let out its fragrance. ANdAL was similar to the latter.  In other words, even at a very young age, she was steeped in devotion. She composed the thirty pAsurams of thiruppAvai when she was just five years of age. In nAchchiyAr thirumozhi she melts to attain emperumAn. Oh my heart! Celebrate such ANdAL all the time.

In thiruppAvai which she composed, she determined that emperumAn is the upAyam (means to attain him) and the upEyam (end result to enjoy, after attaining him). Since emperumAn did not come and take charge of her, she became heart-broken. With uncontrolled desire to attain emperumAn, ANdAL composed this wonderful prabandham, nAchchiyAr thirumozhi.

At the end of each padhigam (decad) she identifies herself as vittuchiththan kOdhai and battarpirAn kOdhai (daughter of periyAzhwAr), being subservient to periyAzhwAr. She reveals her state of being in AchArya nishtai (fully anchored in the position of being subservient to AchArya, the guru) by saying that she would welcome if emperumAn accepts her for the sake of periyAzhwAr. Being the reincarnation of bhUmippirAtti (bhUdhEvi), by manifesting her close relationship  with emperumAn, she makes us engage in the ecstasy of devotion.

This simple explanation is being written with the help of periyavAchchAn piLLai’s commentary and puththUr swAmy’s explanation to it.