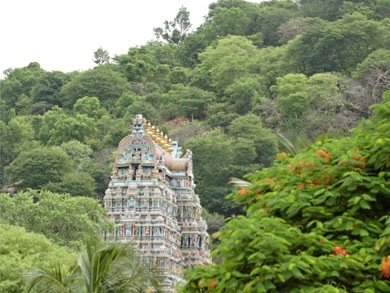 In the fourth pAsuram – AzhwAr says “the thirumalai (divine hill) where sarvESvaran mercifully resides to remove the bondage of karma and let the devotees serve and live [happily], is the apt refuge”.

Subsequently, AzhwAr says “to attain thirumalai which is surrounded by huge gardens and which is the abode of rakshaka (protector) , is the apt action [for devotees]”.

emperumAn who lifted the big (gOvardhana) hill and protected the cowherd girls/boys, eternally resides manifesting his radiance in the divine abode of mAlirunjOlai that has very tall and wide gardens which are touched by the floating, laden clouds; he resides there to remove the karmas which are bondage and which are difficult to remove, and to accept the services of the jIvAthmAs; thus, to reach that thirumalai itself is that which is to be done [by all]. Since AzhwAr emphasises thirumalai with the adjective of mAlirunjOlai (tall, wide gardens), the beautiful gardens of thirumalai being the goal is highlighted.