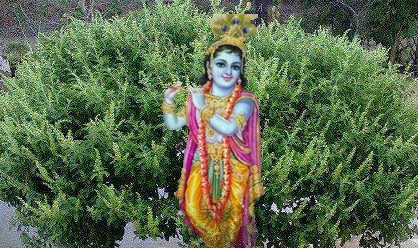 In the eighth pAsuram, parAnguSa nAyaki says “Those entities which were harming me individually and together, are now competing with each other to hurt me”.

(after evening time)
pun – having weakened
sekkar – being reddish sky;

(while tormenting us by being in our thoughts)
kaNNanil – more than he
kodidhu – are being cruel;
ini – further
adhanil umbar – more than that
madhu – honey
maNam – having fragrance
malligai – jasmine’s
mandham – without losing freshness
kOvai – in garland
vaN pasum sAndhinil – more than distinguished cool sandalwood paste
panjamam vaiththu – with the tune named panchama
adhu maNandhu – engaging in union which is difficult to comprehend
in aruL – being the target of his sweet mercy
AychchiyarkkE – for the gOpikAs
Udhum – playing (to be known on its own)
ath thIm kuzhaRkE – for the sweet sound of the flute which reveals the beautiful sight at that time
nAn – I
uyyEn – will not survive.

The softened northerly breeze is rising up, fetching and carrying fresh fragrance and blowing at me; the reddish sky has weakened; the mischievous acts of union and separation of krishNa who is having greatness which is beyond words, are more cruel than he; further, there is jasmine garland having freshness and flower with honey and fragrance; more than that, there is the distinguished cool sandalwood paste and the tune named panchama; beyond all of these, I will not survive the sweet sound of the flute which reveals the beautiful sight at that time which is being played by krishNa for the gOpikAs who are target of his sweet mercy by engaging in union with them, which is difficult to comprehend.