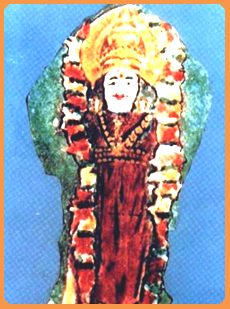 In the sixth pAsuram, AzhwAr says “When I see krishNa who greatly torments me after coming to me as if accepting my service, I will consider his deceptive acts to be truthful acts”.

em kaNNan – krishNa who has great love towards me, his
kaLvam – deceptive acts (which are one way on the face and other way in the inside)
enakkuch chemmAy irukkum – look truthful to me;

(when asked “How?”)
angaNNan – being desirous, due to his love
uNda – due to consuming
kOdhu – faulty
en Ar uyir idhu – my soul

(considering emperumAn‘s acceptance of its essence as a favour, and not leaving him)
punkaNmai eydhi – attaining a miserable state
en kaNNan enRu – saying that he is obedient to me
irAp pagal pulambi – lamenting in night and day
avan kAtkarai – thirukkAtkarai where he is residing
Ehthum – praising.

The deceptive acts of krishNa who has great love towards me look truthful to me. My faulty soul considering his being lovingly desirous and consuming of it, attaining a miserable state, saying that he is obedient towards it, lamenting in night and day, is praising thirukkAtkarai where he is residing. punkaNmai is also explained as being very less intelligent.