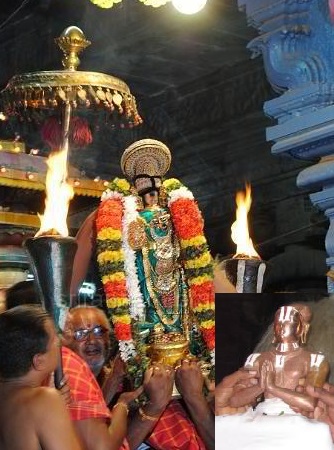 In this pAsuram, mAmunigaL is following AzhwAr’s pAsurams of giving instructions to samsAris (worldly people) on emperumAn’s saulabhyam which extends up to his archAvathAram and is mercifully explaining it.

How is that done?

AzhwAr thought “My giving up on these worldly people is like beating those who are already falling down, with a stick” about the loss of those who were despised by him, and out of overwhelming compassion, instructs emperumAn’s saulabhyam to them by mercifully explaining his para (supreme form in paramapadham), vyUha (his form in kshIrAbdhi), vibhava (incarnations) etc in proper order; further he explains “as you consecrate a form as per your desire, out of his great simplicity, he shows great affection for those forms similar to the desire he has for his divine forms in paramapadham, he mingles with you all and fulfils all your desires; so you surrender unto the archAvathAram of emperumAn” in thiruvAimozhi 3.6 “seyya thAmaraik kaNNan“; mAmunigaL mercifully explains the essence of it, starting with “seyya paraththuvamAy“.

(who said that?)
payinRu pannu thamizh mARan – AzhwAr who is having the thamizh vEdham, which is well analysed along with chEthanas, as his identity

AzhwAr who is having the thamizh vEdham, which is well analysed along with chEthanas, as his identity, mercifully explained that for those who surrender, in this material realm, among the distinguished parathvam, great vyUha, pure vibhava etc forms, deity forms are easy to approach.

mAmunigaL is revealing the identity of the one who brought out the greatness of archAvathAram in this manner.