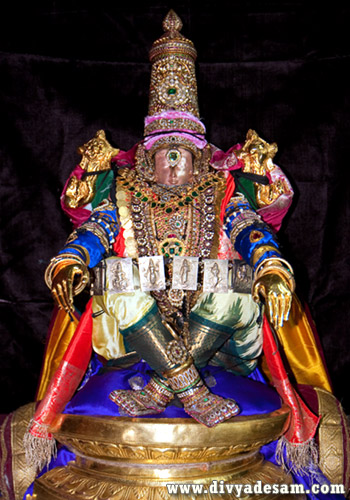 In the eighth pAsuram, AzhwAr meditates upon emperumAn‘s assuming of a form which is part-human and part-lion, at once, due to the urge in protecting of his devotee which is greater than the quality of accepting the one who worshipped another dhEvathA.

(to become eternally sorrowful losing their residences as said in “bibrANam mAnushim thanum“)
allal – sorrow
seyyum – giving
iraNiyan – hiraNya’s
Agaththai – body
mallal – huge as said in “mahAvishNum”
ari uruvAy – assuming narasimha form
seydha – effortlessly tore
mAyam – amazing act
aRindhum – even after learning from pramANams (authentic texts)
sella – to go up to the boundary of his partiality towards his followers which is the essence of that incarnation
uNarndhavar – those who realise
selvan than – the SrImAn who has narasimha form
sIr – the glorious, valorous history
anRi – other than

(anything else)
kaRparO – will they learn?

emperumAn, assuming the huge narasimha form as said in “mahAvishNum“, effortlessly tore the body of hiraNya who was giving sorrow to dhEvas who grant results and was causing trouble to the world in various ways due to his boundless, great thapasya; even after hearing this amazing act of emperumAn from pramANams, will those who realise to go up to the boundary of his partiality towards his followers which is the essence of that incarnation, learn anything other than the glorious, valorous history of the SrImAn who has narasimha form?

What is so great about protecting someone who approaches emperumAn with purushakAram (recommendation) of another person? [the reference here is to the previous pAsuram where mArkkaNdEyA’s narrative was mentioned] Is it comparable to the quality of narasimhan emperumAn‘s protection with lion’s head and human’s body, when one’s own father [prahlAdha’s father] has become inimical? This is the quality of protecting as said in periya thirumozhi “peRRAr peRRozhindhAr pinnu ninRadiyEnukku uRRAnAy vaLarththu” (after my parents abandoned me, you remained my relative and raised me).