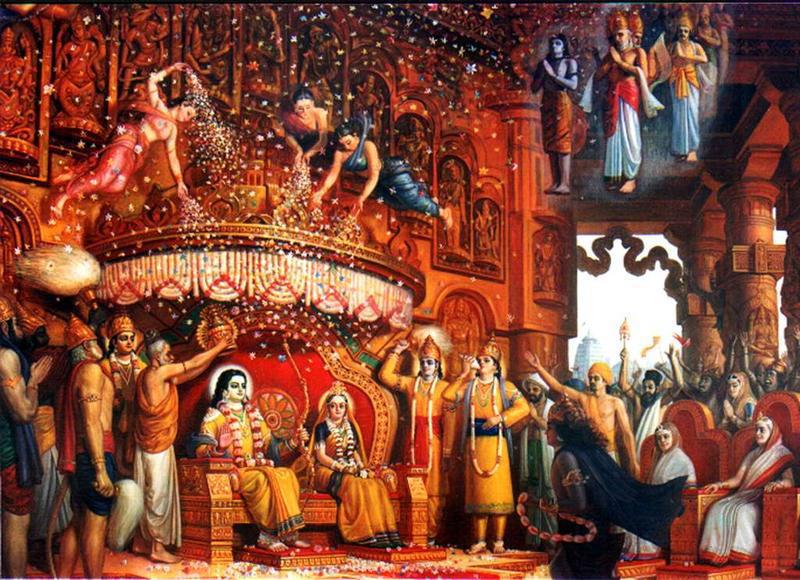 In the first pAsuram, AzhwAr says “Would those who analyse about priyam (aspects which give pleasure) and hitham (aspects which do good), learn about anyone other than the great benefactor SrI rAma, who, out of his own will, made the residents of SrI ayOdhyA feel happy/sad in his union/separation?”

pA – sprouted and spread
pul – grass
mudhalA – starting with
pul – very lowly
eRumbu – ant
Adhi – etc
naRpAl – the good place (where SrI rAma’s qualities are observed)
ayOththiyil – in SrI ayOdhyA
vAzhum – those who are living, with the joy of enjoying the qualities [of SrI rAma]
sarAsaram – in the form of chara (mobile) and achara (immobile)
muRRavum – all entities
nAnmuganAr peRRa – created by brahmA
nAttuLE – in the universe
onRu – any means to be uplifted
inRiyE – while not having
naRpAlukku – the apt land [paramapadham], which is a good place
uyththanan – placed;

(hence)
kaRpAr – those who desire to learn something which is priyam and hitham
irAman – chakravarthith thirumagan (the son of emperor dhaSaratha and who is too desirable, and who is embodiment of dharma)
pirAnai – great benefactor
allAl – other than
maRRum – any entity
kaRparO – will they learn?

Those who are living in the good place, in SrI ayOdhyA, with the joy of enjoying the qualities [of SrI rAma], all entities in the form of chara (mobile) and achara (immobile) created in the universe by brahmA, starting with the sprouted and spread out grass, very lowly ant etc, who were not having  any means to be uplifted, were all placed in the apt land, which is a good place, by SrI rAma; those who desire to learn something which is priyam and hitham, will they learn about any entity other than the great benefactor, chakravarthith thirumagan (SrI rAma)?

Further, the reason for learning about SrI rAma, giving up everything else, is explained.