Since the place he is in is not got to be thirukkOvalUr, and since emperumAn did not come to the place where he was and showed Himself, he called Him using the true characteristics of emperumAn that would be the reasons for Him to come and show Himself – in previous pAsuram.

In this pAsuram – ‘For those who wish the see the beauty of my striding the worlds, I am showing that beauty in the same pose by coming to thirukkOvalUr; so AzhvAr who wishes to see that should come here and enjoy it, is all there is’ – is this what He is thinking (and so is not showing Himself in the different place where I am now)?, wonders Azhvar, and also fears,  ‘Is He not showing Himself here to me, thinking that I am a rogue?’;

Then, he thinks ‘If we consider His ways, He would go by Himself and show His form to those even having a lit bit of interest; He is One who shows up without considering the merit or absence of it in a person; so such blemish would not occur in Him; so my losing His divine vision is due to my sins only; so due to my wish in vain and not able to let go of Him, and so toiling in this body, my state has become like that of being yAthanA Sareeram (body which one gets into while going to hell) which would not be destroyed nor be tolerable, and so am being put up in this place and be sorrowful’  – AzhvAr is sad thinking about his state.

munneer mallaiyAy – Oh One who lives in thiruk kadal mallai (dhivya dhEsam, modern day mahAbalipuram) by the shore
mAmaNi vandhu undhu – which brings and pushes the best gems
vangaththAL – by ships!
madhiL kachchi UrAy – Oh One who lives in the city of kAnchee having divine ramparts / walls!
pErAy – Oh One having divine presence in the city of thiruppEr!
kula varaiyan madappAvai idappAl koNdAn pangaththAy – Oh One having on one side (of His body) the rudhran who is having in the left side (of his body) acquiescent/beautiful pArvathi, who is the daughter of himavAn who is the best of kings,
kongu Ar vaLam konRai alangal mArvan – and such (rudhran is ) having in His chest the garland of koNRai flower that is having honey and much beauty.
pArkadalAy – Oh One who is resting in the divine milky ocean!
pArin mElAy – Oh One who incarnated in the earth (for doing good to those living here)!
pani varaiyin uchchiyAy – Oh One who stood at the top of cool divine thirumalai (thiruvEnkatam)!
pavaLa vaNNA – Oh One having pleasant divine body like a coral!
engu uRRAy – where have You gone in to?
emperumAn – On my lord!
unnai nAdi – searching for You,
EzhaiyEn – adiyen having the wish in vain, am
uzhithargEnE – roaming
inganamE – in these ways only.

vangaththAl mAmaNi vandhu undhu munneer mallaiyAy –  A devotee (named puNdareekan) had in this shore put together a garland, and thought ‘we should decorate Him with this before it loses its sheen’ (and since emperumAn lives on the shore of the other end of the sea), he started draining the sea water thinking he can not go near Him across the sea unless the sea dries up; seeing his love towards Him, He came to the place where he had made a place for Him and rested there on the ground (without Adhi SEshan), the place which then became to be known as thirukkadal mallai.

But, while it would have been apt to just say ‘munneer mallai’ why add adjectives (vangaththAl mAmaNi vandhu undhu …) – ship is one that would push things from one island to the other; likewise, He who is set in paramapadham got pushed into this world and got Him lying down on the floor – due to the love for His devotee. Here the ship is His love towards His devotees.

mAmaNi – gem of very high value; This love pushed that gem which is as said in ‘kaiyAr chakkaraththu en karu mANikkam [thiruvAimozhi – 5.1.1]’ (with the divine hand well fixed with  the divine disc, One who made me enjoy your attractive blue gem like divine form!), and ‘vAnavar uchchi vaiththa peru mANi [periya thirumozhi – 9.5.4]’ (nithyasUris keep Him in their head as a valuable gem).

vandhu undhu – He is lying down in the sea shore with no one to come and have Him! Just as how one who knows the value of ruby gem would keep it safely tied in a valuable cloth, One who is ever enjoyed by nithyasUris is the One who is here lying down the shore – there is no one who understood this greatness and nurture Him here, that the state in which you see, He is staying here on the floor; even if some people come to Him they would ask for other things and go away, alas, there are none who wish to get Him.

munneer mallaiyAy – One of great valuables of another abode (place; paramapadham), has come to this island (place) that is thirukkadal mallai, but is not sold (wished for), but is still lying down on the ground of this shore without getting tired (of waiting).  It is the ananthasAyI  (One who rests on ananthAzhvAn (Adhi SEshan)) who for a devotee has come here and is lying down on the ground, you see.  By these adjectives, there is no one who has understood His greatness and nurture Him, and thus talks about the lowness of this place (world);

One who could come to the place of a devotee and show Himself, is the One who is not showing Himself to me who is longing.

madhiL kachchi UrAy – Even though (in previous pAsuram) he talked about these dhivya dhESams, there is no blemish of ‘saying same thing again in pAsurams’ (punar ukthi dhOsham) due to difference in application here; (there, it was to say that He is similar in the good characteristics of emperumAn of thirukkOvalUr;  here he is mentioning the dhivya dhEsams for different reasons);

Unlike in thirukkadal mallai where He is present without the care of anyone, here some people of high quality have constructed these walls which we got the opportunity to see – says AzhvAr. He talked about his sadness of seeing no one to care about emperumAn there; here he is caring that emperumAn has been saved with the walls raised; even while he is sad due to not seeing emperumAn, his true nature is such that he is caring seeing whether there would be any danger to emperumAn. Or, the walls are such that the enemies cannot get into the place, says AzhvAr.

mallaiyAy madhiL kachchi UrAy – stuff that comes in at a shore would get sold in a city only; likewise, emperumAn came ashore at thirukkadal mallai and got sold (cared for) at kancheepuram.

Caring for Him considering His tenderness, and, grieving/being angry considering ones’ own state (of not getting the vision of Him) , are both apt for a jeevAthmA.

pErAy – in the aforementioned, he talked about how emperumAn is anxious whether He would get the devotes;  here – as said in ‘thirumAlirunchOlai malai enREn enna thirumAl vandhu en nenju niRaiyap pukunthAn [thiruvAimozhi – 10.8.1]’ (~(even though I was not  interested in You), just based on the reason of my saying ‘thirumAlirunchOlai’ You came and took me as yours), He is present (in the dhivya dhESam thiruppEr) to get the devotees for Himself, and that is He who is not taking me who cannot survive if separated from Him, says AzhvAr.  By this, it says that emperumAn comes to the place of His devotees and shows Himself.

Now it talks about His coming and showing Himself without looking at one’s disqualifications. 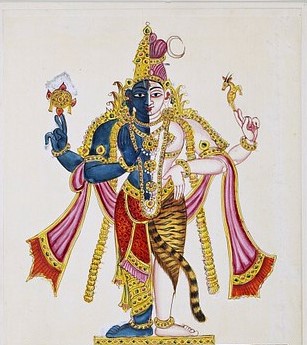 emperumAn having Sivan in His divine body
(image coutesy: https://en.wikipedia.org/wiki/File:Harihara_V%26A.jpg)

kongu etc – Like a saying in thamizh, ‘nAyE koL, pEyE koL’, that refers to sivan who is being with ghosts, got a place in the divine body of emperumAn, but that divine body is being hard for me to reach, laments AzhvAr. Oh the One who in a part of His divine body is having sivan who is decorated with ‘konRai’ garland that is having honey, fragrance and beauty. kongu – honey. Ar – excess of it. vaLam – beauty. (aRRu – a meaningless affix allowed by thamizh grammar). Beauty of a flower – being fresh, and full of fragrance.

kulavarai etc. – One who is having pArvathy as is wife;  while it would have been enough to just say,  ‘giving part of his divine body to rudhran’, this pAsuram is giving so many attributes to him describing so much, which is to make his wrongful pride explicit: trying to be equal to sarvESvaran who is decorated with divine basil/thiruththuzhAy and who is the husband of SrIdhEvi, he wears konRai flower garland and thinks ‘I am eeSvaran’ – it is to such sivan of bad disposition that He gave his body.

kongaththAr vaLankonRai alangal mArvan – Being opposite of ‘thaNduzhAy mAlai mArban [thirumAlai – 5]’ (One having chest decorated by thiruththuzhAy garland). Seeing eeSvaran  protecting/sustaining the worlds wearing unique garland of thiruththuzhAy, he is wearing konRai garland thinking ‘I too should need a garland if I should be called eeSvaran and so look for one’.

kulavaraiyan madappAvai –   Being a counterpart of ‘malar magaL virumbum nam arumpeRal adigaL [thiruvAimozhi 1.3.1]’ (being joyed about the two aspects of being eLiyavan (simple to attain) and ariyavan (difficult to attain)) being desired by One who is having the lotus flower as her residence, our master who is difficult to attain). Oh He is being Sriya:pathi (husband of lakshmi),  when we get such opportunity we should also be with a wife – thinking so he is being umApathy (husband of umA (pArvathi)).

idap pAl koNdAn – As counterpart to ‘vala mArbinil vAzhginRa mangai [thiruppallANdu – 2]’ (thAyAr who lives in the right chest of Him); (rudhran is having umA on his left side).

pangaththAy – (pangu – a share); As said in ‘kUr ALum thani udamban [thiruvAimozhi – 4.8.1]’ ((kUr – share) having divine body which the consorts individually (part by part) enjoy and consider to be their own abode, which is unique, and spiritually distinguished), emperumAn gave a part of His body to rudhran as if in competition with periya pirAttiyAr . It is the divine body which He gave to Her who never separates from Him, which He also shared with rudhran who thinks ‘ISvarOham’ (I am the lord). He does not see rudhran’s state, or Her state, or His own state – He sees only His relationship with them (AthmAs). The form that He gave to the one having perversity of mind that thinks ‘I am the lord’, is not available to me who does not survive without seeing that form, says AzhvAr.