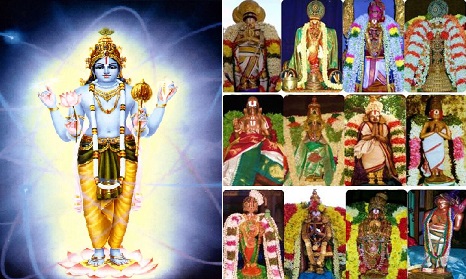 moymmAm pUmpozhil – AzhwAr speaks about a) the glories of those who enjoy [as explained in previous decad] emperumAn‘s auspicious qualities such as ASritha vAthsalyam (motherly affection towards his devotees) etc, speaking about such qualities after becoming greatly blissful after enjoying in such manner, entered many towns and dancing in glorification of such names in spite of being laughed at, and enthusiastically dancing around and b) the invalidity of those who don’t engage in such activities.

In fifth decad – AzhwAr who enjoyed bhagavAn‘s qualities like those monkey devotees headed by hanumAn entered the madhuvanam [a garden which was belonging to sugrIva was ransacked in joy by the monkey army after hanumAn spotted sIthA in lankA, while they were heading back to sugrIva to inform about their success], like emperumAn himself mercifully explained the classification of dhEvas (saintly persons) and asuras (demoniac persons) in [16th chapter of] SrI bhagavath gIthA and condemned the demoniac people and glorified the saintly people, AzhwAr too condemns those ignorant ones, those who are inspired by those who are following rituals mechanically without understanding their relationship with bhagavAn, prideful ones, those who have not heard from many [authentic] sources, those who take shelter of emperumAn yet seek out worldly pleasures, demoniac personalities, those who don’t dance/sing on hearing the qualities of emperumAn even from demoniac people and glorifies those who become emotional on just hearing about bhagavAn’s qualities saying that their nature cannot be comprehended. How is it that AzhwAr who is best among saintly persons glorify some and condemn others [shouldn’t he be neutral]? SAsthram tells that “one should not be prideful due to enjoying worldly matters and not condemn anyone unless there is particular reason”; while having joy due to engaging in spiritual matters and condemning those who are not engaged spiritually is not contrary to SAsthram, this can be understood from the lives of mukthas (liberated souls) and SrI nAradha bhagavAn and is said to be acceptable.

In the fifth decad – after acquiring great taste in the servitude in context of everything being prakAra (form/attribute) of bhagavAn, AzhwAr being delighted highlights the following aspects:

AzhwAr explains the great taste of servitude by meditating upon these aspects, out of great love; AzhwAr condemns those who do not become related to bhagavAn and glorifies those who are joyful [in thinking about bhagavAn], sing and dance his glories.

After enjoying bhagavAn in “pugazhunalloruvan“, being joyful out of the great delight acquired by that, condemning those who don’t have that joy and glorifying those who have that is explained in “moymmAm pUmpozhil“. Only if one can understand his extreme sorrow which he felt in “munnIr gyAlam” after observing the connection with this material realm and the attachment towards worldly matters, one can understand his extreme joy that was acquired after enjoying bhagavAn; when asked “if AzhwAr is also engaged in bhagavath vishayam and we too are engaged in that, why is he like this [with extreme joy/sorrow in relation to bhagavAn] and why are we not like that?”, that is because we only know sorrow/joy in gain and loss of worldly matters which should be hidden from everyone, which in rejected in SAsthram in unison, difficult to acquire, more difficult to retain even if acquired, subsequently will lead to naraka (hell) and cause further damage.

Now, how is AzhwAr who is devoid of desire/hatred and is the best among saintly persons, subject to sorrow and joy which are rejected in SAsthram? His [sorrow/joy] are not the ones that are rejected by SAsthram. His joy is the result of experiencing sarvESvaran who is the abode of all auspicious qualities. His sorrow is due to thinking “such apt bhagavAn is lost since time eternal and we are engaged in worldly pleasures”.  Though SAsthram rejects kAma (mundane love), it also ordains bhagavath kAma (love for bhagavAn) as said in bruhadhAraNyaka upanishath “nidhidhyAsithavya:” (to be constantly meditated upon); Even mukthas (liberated souls) due to experiencing bhagavAn would joyfully say “aham annam aham annam aham annam” (I am the food that is enjoyed by bhagavAn (emphasised 3 times)); even nAradha et al would dance and sing in front of bhagavAn as said in mahAbhAratham rAjasUya parvam “… sarvasamSaya nirmukthO nAradhassarvadharmavith” (nAradha who has no doubts in any principles and who knows all dharmas (principles) well, happily shook his tree-bark clothes); even thiruvadi (hanumAn) who is the best among renunciates, ordered his monkey army to ransack and enjoy the madhuvanam; he said to them that he will take care of dhadhimuka et al who are safeguarding the garden in SrI rAmAyaNam sundhara kANdam  63.15 “… ahamAvArayishyAmi yushmAkam paripanthina:” (I will stop your enemies); when [sugrIva] mahArAja was informed that his garden was destroyed [by the monkey army headed by hanumAn], sugrIva thought “though the time given to them has lapsed and knowing well that ‘I will punish severely’, they have destroyed my garden; this means they must have seen sIthA and worshipped her” as said in the same SlOkam “naishAmakruthakruthyAnAm IdhruSassyAdhupakrama:” (unless they have accomplished their task, they would not dare starting such activity [of destroying the garden]), he in turn became very joyful and slapped his tail on the peak of rushyamuka hill. Lucky that there was a garden in between which absorbed the great joy of the monkeys. Otherwise, they would have all patted on the back of princes [SrI rAma and lakshmaNa] which would have caused great ache [there were many many monkey soldiers in the group that had gone in search of sIthA down south]. If some one who consumes nice betel leaves/nuts cannot control his joy, what to speak of AzhwAr who fully consumed/enjoyed bhagavAn who is considered as a nectar for those who unite with him, who is sweeter than the nectar and who is like a sweet kalpa tharu (desire fulfilling tree).

AzhwAr speaks out of such great bliss acquired from experiencing bhagavAn, AzhwAr first condemns these following types of people:

Though these people may have some good qualities, if they don’t become emotionally charged on thinking about bhagavAn, AzhwAr condemns them considering them to be non-existent.

On the other hand, AzhwAr says “even if one is not great by birth [born in good families etc], activities, knowledge etc., if one becomes emotionally charged experiencing bhagavAn, I am his servant”.