In the previous pAsuram she sent bees as messengers. Since she did not have the strength to sustain herself till the time they went and conveyed the message, and brought the reply, she is sending a crane as a messenger. As said in ‘dhikshu sarvAsu mArganthE [SrI rAmAyaNam – sundhara KhANdam – 30-3]” (seethAp pirAtti who searched in all directions) like how He sent monkey warriors in four directions, she is also sending whichever messengers she saw. Like how the clan of monkeys were gratified in SrI rAmAvathAram, after AzhvArs’ incarnation, the clan of birds were gratified. 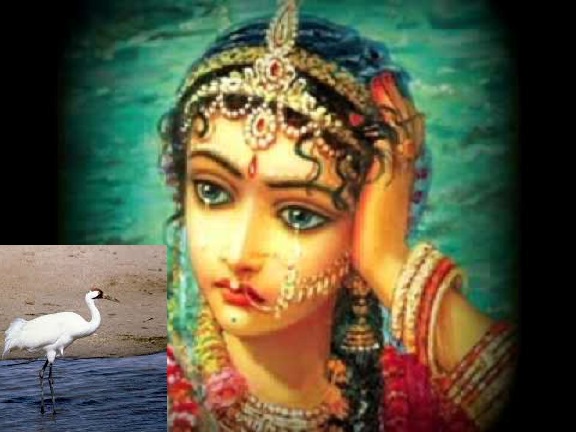 uraiththi Agil – If you would tell

en sem kaN mAlukku – one with lotus eyes, and who is in love with me,

en thuNaivarkku – and who is my companion, that is sowripperumAL,

en kAdhal – about my interest in Him,

emakku – to me (who is suffering due to separation).

Favour I could do for you in return is –

unadhE Aga – making it fully yours

nALum – for all the time that you are alive, and

pazhanam – in the water of the land;

thandhAl – After I give you so,

un pedaiyum neeyum – your wife and you

ingE vandhu – come to this place and

iru nilaththil – in (this) big land

sem kAla mada nArAy – Since she has seen Him praising her feet when she was with Him, when she is sending message, she is praising the feet of the messenger, and not other parts of it. Oh what a foot and how reddish it is!, she praises.

It appears that she has got connections with reddish feet. Oh! this foot is like that of my lover! Like how it would be pleasant if we kept a load of black forest flower in our head, it feels like I could keep looking at your reddish feet only, and not even send you as a messenger. I said it wrongly when comparing your feet as equal to His. Whereas giving His feet is what He does, your feet have the greatness of giving His feet as well as of yourself. You have got the greatness of being easy to obtain, and making Him also easy to obtain.

mada-nArAy – Oh crane that does not have intellect! By madam it is saying about absence of intellect. Should she talk like this when indulged in praising it? Like an ironical phrase, this also leads to praising only. Ironical phrase (nindhA-sthuthi) is – cursory meaning would be a ridicule and inner meaning would be praise. As said in “na SAsthram naiva cha krama:” ((one having at most love) would not see the rules of SAsthram nor the manners of world), you are having great ability of involving in love such that you behave differently during togetherness.

If one interacts with proper etiquette during the time of togetherness, it would just maintain the nature of being a male and female lover, but it would not have the greatness of having love. (Or, considering the meaning of madam as completeness (madappam and other qualities of a woman)), I am having you with completeness in you that would help during my loss by going as a messenger.

nArAy – As vocative case word, it is like saying “Oh mother!”, asking for help. Like while having lost everything to robbery and then seeing the mother who would console; your appearance is like that when I am suffering due to separation from Him, she says to the crane.

As said in “pampA theerE hanumatha: sangatha: [SrI rAmAyaNam – bAla KhANdam – 1-58]” (In the bank of river pampA, SrI rAman joined hanuman), when in the state of suffering in the hands of things that reminded SrI rAma of pirAtti, thiruvadi came to Him – for SrI rAma this was like meeting the mother after having lost everything to robbery.

nArAy – Calling it in high pitch shows the excess of her sadness. Since I am the lover of emperumAn, if you see the greatness of me the wife of king, you should give me payment for doing my work! – she says.

inRe senRu – It is not a matter that you can postpone to tomorrow. If you see His nature, it could not be done next day. If you see my nature, then also it could not be done next day. As said in “na-jeevEyam kShaNamapi [SrI rAmAyaNam – yudhDha KhANdam – 66-10]” ( I would not live even for a second, being separated from seethA), His nature is that He cannot live even for a second when separated from me, she says. As said in “jalAn mathsyAviva-udhDhruthau [SrI rAmAyaNAm – ayODhyA KhANdam – 53-31]” (Like how a fish would live only for short time when out of water, we would also live for only a short time when without you), my nature is like separating fish from water.

kaNNapuram pukku – As she had sent message to thiruvazhundhUr, instead of sending there again, why send to thirukkaNNapuram? He would not sustain Himself in thiruvazhundhUr after I had sent the bee. He and the bee would have started their journey to here in a big hurry (that the clothes in their waist, and plait in their head would loosen up), and would have reached thirukkaNNapuram. So go there and give the message, she says.

senkaNmAlukku – As said in “anidhras sathatham rAma: [SrI rAmAyaNam – sundhara KhANdam – 36-44]” (SrI rAma is sleepless always), He does not sleep due to separating from me; so His eyes would be watery and reddish – that would be an identification of Him for you – she says this also.

mAlukku – To the one who is a big mad lover. (Tell) Him who showed His madness and elevated my madness of love. Only gaining madness is there on my part; gaining madness and making me mad is there on His part only. It is said so too in “mAlAyp piRandha nambiyai, mAlE seyyum maNALanai [nAchchiyAr thirumozhi – 14-3]” (~One who is madly in love, and who makes others be madly in love).

en kAdhal – Tell Him that my love is not like His love. “Your love is such that there won’t be any change in the brightness/make-up of the divine body when you show your love, as said in “minnilangu thiru uruvum periya thOLum [thirunedunthANdakam – 25]”; whereas, as said in “pongAr mel iLam kongai ponnE pUppa [thirunedunthANdakam – 17]”, her love is such that the colour of her body would drain away” – is what you go and tell Him.

en kAdhal – As said in “yA preethir avivEkAnAm vishayEshvanapAyinee [SrI vishNu purANam – 1-20-19]” (Like how for those who don’t have discerning knowledge there is desire in the worldly matters, (I should always have interest in you (prayed prahlAdha to emperumAn)), my love is not like the people of the world who love the worldly aspects like sound, form, taste, etc. Those desires would be abandoned after gaining true knowledge. But this desire of mine would not be abandoned. My love is not like those who got liberated from the material world. That love will give only happiness. My love will give sorrow due to separation.

en thuNaivarkku – To my relative who cannot be avoided. Tell Him who is always my companion. His companionship is such that, when I was not interested in Him He gave me life, then created interest, and after union with me and then separation, He made sure I am able to sustain myself (thiruvarangam Ur).

en thuNaivarkku – Tell the One who can remove the trouble I am going through due to separation.

uraiththiyAgil – If you would say. We can only request and not order someone who is helping to get us together. That is only the reason she is saying “if your divine heart wishes”.

uraiththiyAgil – It can also mean – if you would avoid getting distracted by His beauty but do the work as messenger and tell Him about my state.

For you the effort is saying just a word; what I would gain is my being – she says.

idhu oppadhu enakku inbam illai – There is nothing more joyous than this, she says. There is no pleasure for me beyond your telling Him. There is pleasure only after gaining His togetherness; is there pleasure gained just by announcing to Him? Yes since she is of the thought – there is delay only in announcing to Him; His coming and making me happy would not fail.

nALum, etc – It is not enough that you help me and leave, you should accept the little honour I give you due to my gratitude – she says.

nALum, etc. – If Acharyan helps even one time, disciple shall be grateful to Acharyan his entire life.

paingAnam eedhu ellAm – She is saying that she would give to the crane all the land that she thinks is hers. That is, the area of all the garden which is near the sea shore. In thamizh tradition, the place where lover girl spends time is the sea shore (neydhal nilam) when suffering due to separation from her lover. So she is saying she would give that area to the crane.

eedhu ellAm – She is giving all the land that the eyes could see. “I will give you all my wealth”, she says. With crane representing AchAryan, and she representing disciple, giving this land implies disciple shall give both the worlds to Acharyan. This is said too in “ponnulagaLeerO bhuvani muzhudhALeerO [thiruvAimozhi – 6.8.1]”.

unadhEyAga – Will not keep it common for both you and me; I will give such that it is all for you – she says.

pazhana meen – In the land of water, since there would always be water, the fish would be fat and big like elephant. By this it implies that what a disciple gives to AchAryan should be of great quality.

As said in “yadhanna: purushO Bhavathi thadhannAs thasya dhEvathA: [SrI rAmAyaNAm – ayODhyA KaNdam – 103-30]” (Whatever one eats, should be presented to the deities also (said SrI rAma when doing last rites for His father)), one could give to forefathers in pithRulOkam the same food that one takes; but, for AchAryas one should search for and give what is desired by AchAryas.

kavarndhu uNNa tharuvan – I would give with hospitality such that it could be eaten with eagerness.

thandhAl ingE vandhu – It is not enough that you accept based on fullness of your qualities what I present to you; you should come here and eat them in front of me.

vandhu – Unlike my lover who came once and helped me and then not showed up, you should come to the place I am in and eat.

Since SrivaishNavas living here are with body, they could achieve at most happiness of gladly giving the things desired by others, by living in a family – this greatness is not there in SrIvaikuNtam.