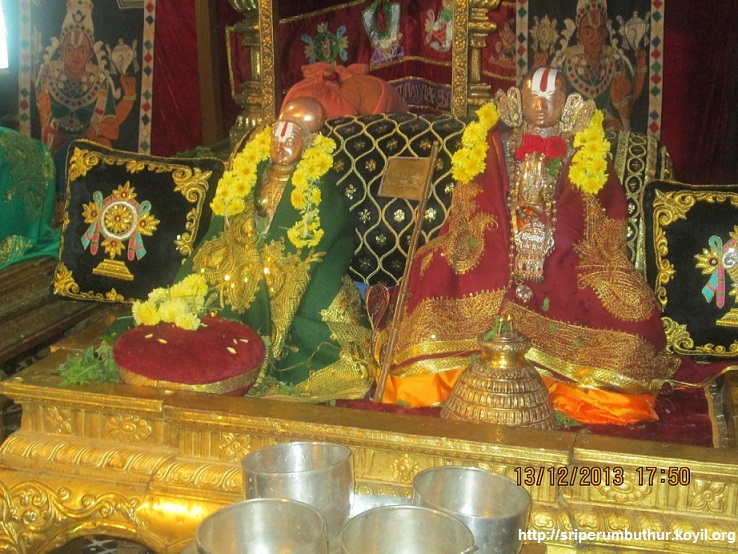 Fifty first pAsuram. amudhanAr says that the purpose of rAmAnuja to incarnate in this world was only to make him [amudhanAr] as his servitor.

For the pANdavas who were proud since they were following his divine footsteps and had no support other than himself on that day when the mahAbhAratha war was fought, emperumAn kaNNan conducted the huge chariot which was drawn by horses. emperumAnAr is a nectar for such emperumAn’s servitors who know that emperumAn is everything for them. The purpose of incarnation of such emperumAnAr on this earth was only to take me under his wings. If one were to analyse, there is no other reason for this.

Fifty second pAsuram. When asked whether emperumAnAr has the ability to control him, he explains the huge abilities of emperumAnAr.

rAmAnuja looked with his divine eyes at the six philosophies which did not believe in vEdhas in such a way that they trembled. He covered the entire earth with his fame [his fame pervaded the entire earth]. He entered my heart on his own [causelessly], though I am very lowly, and removed my sins. Apart from that, he created a connection for me with the divine feet of periya perumAL. These are some of the amazing activities of our lord, rAmAnuja.

rAmAnuja incarnated in order to take me under his wings; he is a magnanimous person; he has simple qualities which are desired by wise people; he has amazing activities; he has the honesty of making himself appropriate for the sake of his followers. Such rAmAnuja established the essential meaning in this world that the innumerable AthmAs (souls; sentient beings) and the worlds inhabited by them are under the control of emperumAn.

Fifty fouth pAsuram. amudhanAr states further the positions of bAhya philosophies (those which do not accept vEdhas), vEdhas and thiruvAimozhi (the prabandham composed by nammAzhwAr), as a result of rAmAnuja establishing the supremacy of emperumAn.

Looking at the nature of rAmAnuja who further increased his great qualities on this earth, the bAhya lowly philosophies, which were established by lowly people with their own efforts, died down just as darkness disappears with the arrival of sun. vEdhas which radiantly revealed that SrIman nArAyaNa is the supreme entity became proud, saying that there is no deficiency for them hereafter. thiruvAimozohi, the dhrAvida vEdham (thamizh vEdham) without any deficiency, which was composed by nammAzhwAr, the magnanimous person who incarnated at thirukkurugUr, prospered.

Fifty fifth pAsuram. Reminiscing about the benefits done by rAmAnuja to vEdhas, amudhanAr says that the clan, of those who are engaged with rAmAnuja’s magnanimity and surrendered to rAmAnuja, is apt to rule them.

periya perumAL dwells permanently in the beautiful temple (at SrIrangam) which is surrounded by fragrant gardens which steal the hearts of those who behold them. emperumAnAr, who is praised by those who have surrendered to periya perumAL, enabled the vEdhas which have innumerable tunes to them, to prosper on this earth and he is very magnanimous. The clan [of people] which is fully engaged with the qualities of emperumAnAr and does not involve with worldly matters, is the clan which is fit to rule over us.

Fifty sixth pAsuram. When reminded that he used to say this of worldly matters earlier, amudhanAr says that after attaining emperumAnAr, his words and mind will not know about any other entity.

emperumAn incarnated as parusurAma, who with his sharp axe, killed kings born heriditarily in royal families, for twenty one generations. emperumAnAr, being defeated by that quality, would praise that emperumAn. After attaining that emperumAnAr, who with his most puritanical state can purify even the most impure people, and who has fame spread all over the world, my word will not praise anyone in the days to come and my mind will not think of anyone else.

Fifty seventh pAsuram. amudhanAr was asked “How can you say that your word will not praise and that your mind will not think of others, this being samsAram?” He says that he does not have the folly of desiring anything else without the ability of discriminating between correct and incorrect, after having attained rAmAnuja.

There are those great people who do not consider any benefit other than being a servitor to the divine feet of periya perumAL, as something to be desired. emperumAnAr considers such people as being close to his AthmA, and he is praised by those who are thapasvis (engaged in carrying out penance), having surrendered to emperumAn. I have attained such emperumAnAr; having attained him, I will not know of any ignorant activity of engaging with other matters.

Fifty eighth pAsuram. He feels joyous about emperumAnAr having destroyed the philosophies of those who interpret the vEdhas incorrectly.

Though accepting vEdhas as authentic, there are ignorant people who, without knowing the meanings of vEdhas correctly, give a wrong interpretation to vEdhas and prove it [incorrectly]. They agree that brahmam (supreme being) is distinguished from everyone else and say that apart from brahmam, every other jIvAthmA (sentient being) is that brahmam only. While trying to establish mOksham they say that once jIvAthmAs give up their physical bodies [when they die], they merge with brahmAm who is the causative factor. rAmAnuja, who is an ocean of only truthful knowledge and our lord, argued with such ignorants and defeated their arguments. How amazing is this!

It was the time when the darkness of kali had spread thickly in all the directions which had oceans as their limits. If rAmAnuja had not incarnated during that time and destroyed the darkness of that kali with the help of the unlimited effulgence of the vEdhas, there would have been none who would have known that nArAyaNan, who has everything else as his divine form, is the leader of all the AthmAs.

Sixtieth pAsuram. When asked about the devotion of emperumAnAr, he explains it in this.

emperumAnAr is resplendent with his AthmaguNas (qualities of AthmA), and is like the rain bearing clouds. He is the leader of our clan. He is mercifully present in the gatherings of those who know the truthful knowledge, in the places which reverberate with the fragrant music of thiruvAimozhi and in the divine abodes where emperumAn, who has periya pirAtti living constantly on his divine chest, dwells. emperumAnAr will be immersed in all these places.