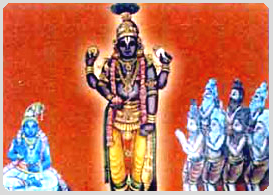 In the ninth decad,  previously AzhwAr acquired clarity in his mind as in “For sarvESvaran who has qualities such as saundharya (beauty), Seela (simplicity) etc, the pure AthmA is subservient as prakAra (form)” and set out to explain the thadhEka rakshyathva (being protected by bhagavAn only) and thadhEka bhOgyathva (being enjoyed by bhagavAn only) of that AthmA, the servitor and highlighted the following aspects:

AzhwAr became immersed in the experience of sarvESvaran who is residing in [kuttanAttuth] thiruppuliyUr with these aspects and became blissful which reflected on his form; observing that, the well-wishers of AzhwAr who were in his proximity became inquisitive about the glow in AzhwAr’s form and AzhwAr’s very dear well-wisher explains them the situation; AzhwAr mercifully explains this scenario through the example of parAnguSa nAyaki who naturally united with the thiruppuliyUr nAyanAr (lord of thiruppuliyUr) and as a result had physical changes in her form; a close friend of parAnguSa nAyaki observed that and understood that there has been a union between emperumAn and her; without realising this, her relatives assumed that she has attained the proper age to get married; parAnguSa nAyaki’s friend understands that this is undesirable for parAnguSa nAyaki based on her speech and physical changes, and decides to stop those efforts by her relatives; she tells them “parAnguSa nAyaki is constantly speaking about the qualities and names of thiruppuliyUr nAyanAr; she has some emotional bonding with him; he is – a person with matching beauty, well decorated, a valorous man, with great qualities, very opulent, very magnanimous, very loving, with good conduct, must be an expert in vEdham and an amazing person; hence, as she is having unique bodily features which reveal her union with him, she belongs to him”.

In the previous decad, in the first two and a half pAsurams, AzhwAr enjoyed emperumAn‘s qualities such as saundharya, Seela etc and in the remaining pAsurams, he enjoyed similarly glorious AthmA which is subservient to emperumAn, and became pleased; being pleased with the taste of servitude, out of great joy, AzhwAr gave up his own nature and assumed a feminine nature, and speaks about his own state through anyApadhESam (the emotions of someone else). (kUrathth)AzhwAn explains “only in this decad, AzhwAr speaks about his joy through anyApadhESam”. A close friend of a pirAtti (parAnguSa nAyaki) who naturally united with thiruppuliyUr emperumAn and separated, observed that the pirAtti’s heart was captured by him, and understood that they both have had a union based on pirAtti’s speech and physical signs; without knowing any of these, as said in SrI rAmAyaNam ayOdhyA kANdam 119.36 “pathi samyOga sulabham vayO dhrushtvA cha mE pithA” (sIthAp pirAtti says – janaka, my father, drowned in an ocean of sorrow thinking about me, ready to be married [and yet not finding the right groom for me]), simply considering to have attained the proper age for marriage, the pirAtti’s father et al announce her svayamvara to invite interested princes to come and marry her, by beating the drums in the town; she (parAnguSa nAyaki’s friend) heard that and went through the same emotions as bharathAzhwAn did when he heard that “you are the king” and thought “if parAnguSa nAyaki hears this, we will lose her since she is of the nature as said in nAchchiyAr thirumozhi 1.5 ‘mAnidavarkku enRu pEchchup padil vAzhagillEn‘ (I will not live if anyone links me with any mortal being); so I should act soon; while doing something to avert the situation, if I said ‘she united with thiruppuliyUr nAyanAr’, that will put the blame on my own lethargy in letting it happen; if I don’t explain that, we will lose her; what shall I do now?” and thought “her relatives will ask ‘there are some differences in her body; what is the reason for them?’; I will work along with them to find out the reason and pretend that I found out during such analysis and avert the situation”; she gave good advice saying “from the looks of her, it seems that she had united with thiruppUliyUr nAyanAr; she is constantly reciting his qualities and activities; you try to avoid your efforts”. They responded “this is not dharma (fair)” and continued “but, the thiruppuliyUr nAyanAr whom you speak about should have matching greatness for her; he should have decoration, valour, qualities, opulence, magnanimity and love; he should have the best conduct; he should have true knowledge in vEdhAntham; does he have all of these?” She said “It is not just limited to what you ask for; he is full in all of these aspects; further, even if he does not have any of these aspects, she has become exclusively subservient to him; you avoid your efforts now” to stop them. This comes under a poetic category known as “maNavilakku” (stopping a marriage). In thirumanthram [in nama:], ananyArha SEshathvam (exclusive subservience) [towards emperumAn] is explained after eliminating ones existence for self and others [other than emperumAn]; that is explained here. In the previous decad, ananyArha SEshathvam was explained; in this decad – it is explained that anya SEshathvam (being subservient to others) and svasvAthanthriyam (being independent) are inapt goals. For an unmarried woman, to exist for only one person and in such case not existing for all others, are natural aspects.