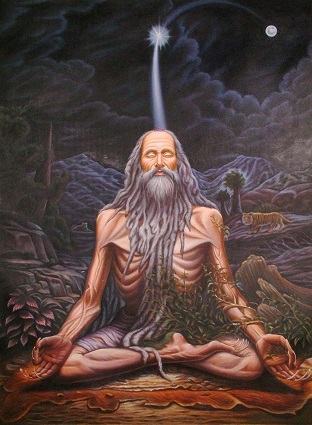 In the fifth pAsuram, AzhwAr says “This AthmA (self) which I realised by bhagavAn‘s prasAdham (mercy) cannot be known by anyone; even if known, it cannot be realised”.

Fifth pAsuram. embAr mercifully explains “Previously – AthmA was explained as bhagavAn‘s prakAram (form/attribute); from here onwards, just as the whiteness on a cloth will be explained separately using separate words, up to the pAsuram ‘em pemmAnOdu‘, AthmA’s distinctive nature is explained”. mudhaliyANdAn says “AthmA is explained as prakAram of  bhagavAn”. In the AthmA which is explained as “ninRa onRai“, it is highlighted by AzhwAr “this AthmA which is seen by bhagavAn’s mercy, cannot be known by anyone and even if one knows about it with great efforts, one cannot see it”.

(Unlike achith (insentient objects) which are perishable and are in variegated forms)
ninRa onRai – AthmA which is eternal (and made of knowledge only)
uNarndhEnukku – for me who saw it (as he showed as his prakAra (form))
adhanuL – its
nErmai – subtle, distinguished nature
onRum – any

(as realised or experienced as one among the same species)
uNaral AgAdhu – cannot be known (through SravaNam (hearing), mananam (meditation) etc);
uNarndhum – even if known (with great efforts)
mElum – even while gone upto the level of samAdhi (trance)
kANbu aridhu – will be difficult to see directly;

(for me who saw him as he showed himself to me) (in body, senses, mind, vital air, knowledge)
param paramAy – going further over every entity
senRu senRu – passing through
yAdhum – with their nature (such as change)
inRi – without having
thEyndhu – being very subtle
aRRu – eliminating (their connection)
nanRu thIdhu – having virtues and vices (which occur based on their desires)
enRu – as
aRivu aridhu Ay – being difficult to know
nanRu Ay – having distinguished knowledge and bliss ( which is distinguished in all manners)
gyAnam – for the knowledge (which supports them)
kadandhadhu – beyond.

The AthmA which is eternal and seen by me – its subtle, distinguished nature cannot be known  to be in a particular manner even for those who are fully knowledgeable; even if known and pursued up to the level of samAdhi, it will be difficult to see it directly; passing through and going further over every entity (namely body, senses, mind, vital air, knowledge), without having any change, being very subtle and eliminating the connection with such entities, being difficult to know as having virtues and vices, having distinguished knowledge and bliss, the AthmA remains beyond the reach of knowledge. In this pAsuram, the distinguished nature of AthmA is explained through the philosophy of sAnkhya.

When asked “How did you feel about it when you analysed it?” AzhwAr says,