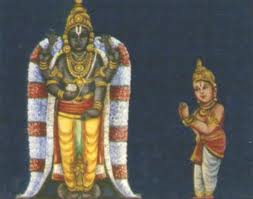 In the first pAsuram, AzhwAr says “sarvESvara (lord of all) is the one who would mercifully eliminate my sufferings; his abode is thirukkadiththAnam”.

In the first pAsuram, AzhwAr says “The abode of sarvaSEshi (lord of all) who has come to do unsurpassed favours, is thirukkadiththAnam”.

emperumAn exclusively grants us his unconditional mercies to uplift me by making me remember him without any distinction between night and day and further bestows his mercy; the abode of such lord, the benefactor who has divine crown decorated with attractive, cool thiruththuzhAy garland with flowers, is thirukkadiththAnam where bhAgavathas are living.