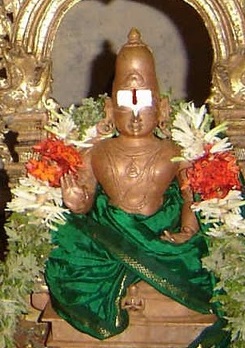 vyAsa – in the guNOpasamhAra section of his brahma sUthras – has at first thought whether the various auspicious qualities attributed to bhagavAn as propounded in the vEdha-vidhyAs such as SANdilya, upakOsala, dhahara, purusha, paryanka etc are just suppositions, and later refuted this school of thought with his aphorism “There are no shortcomings in the vEdhic texts, due to their respect towards Him”. Sage parASara has made this all the more clearer with two of his statements that say “None of the lowly qualities including the sathva born out of this prakruthi are found in bhagavAn” (rebuttal of faults) and “He is the dwelling of all auspicious qualities” (attribution of qualities). Similarly, the various sacred scriptures talk endlessly about His being devoid of all blemishes on the one hand, and His being a dwelling of all auspicious qualities on the other, as shown with a few examples below:

In the Anandhavalli (thaiththirIya upanishath – 2 chapter), the retreat of speech and mind due to sheer inability is only shown when it tries to discuss the boundless knowledge, strength, youthfulness, and other auspicious qualities of bhagavAn. (yathO vAchO nivarthanthE | aprApya manasA saha)

Even in the SrIvishNu purANam, in the context of explaining the word ‘bhagavath’, it begins by saying “this word is attributed to the one who is ever-pure, and possessed with unlimited wealth”, and further proceeds to attribute all auspiciousness to Him.

In the sabhA parva, bhIshma says thus: “Oh king! Many learned scholars have been worshipped by me. From them, I have heard about all the auspicious qualities of Souri (Krishna) who possesses all of those qualities. In all their opinions, only SrIhari– who is full of auspiciousness – is the best entity eligible for worship by one and all.”

The same bhIshma says in karNa parva, thus: “Even if one is teamed up with people of all worlds, he cannot complete listing out all the auspicious qualities of that great wielder of the conch and discus along with His sacred sword, the invincible and all pervading vAsudhEva, even if he tries for tens of thousands of years!”

The varAha purANa says thus: “Even if a man with a very pure heart is blessed with the lifetime of one four-faced brahma, and is granted with millions of mouths, he cannot glorify even 0.01% (one out of ten thousand) of auspicious qualities of bhagavAn!”

The vaishNava dharma speaks thus: “Even if all the sages get together, it would be impossible for them to sing the glories of bhagavAn, who is possessed with such innumerable auspicious qualities”.

Similarly, there are many more examples from SrI rAmAyaNam and mahAbhAratham as well.

If someone argues that the Supreme brahman Himself is affected by a limiting adjunct (upAdhi), and hence bound in this worldly existence, then the verses in this chapter that talked about the purity and auspiciousness of brahman (pavithram mangalam param) would become meaningless, since verily the brahman Himself is attributed with unlimited blemishes.

one of the verses composed by my revered father SrI kUraththAzhwAn has been explained, which originally says thus: “Oh SrI hari! The vEdhas engaged to quantify your auspicious qualities such as your bliss etc. However, after going a considerable distance and realizing that there was no boundary to limit those qualities, the faculties of speech and mind returned, failing the vEdhas in their pursuit!”

Similarly, another statement that says “Oh Lord, you do not have any limiting adjuncts such as names, births etc” (न यत्र नाथ विद्यन्तॆ नामजात्यादि कल्पनाः) is also explained with this reasoning. If you take this statement to mean “since the limiting adjuncts such as names and births are refuted, only now – perhaps – the true and non-imaginary nature of brahman (of being formless) is revealed”, then you are asphyxiating yourself, beware! If what you thought was true, then why would the verse house the name ‘nAtha’? The fact that the Supreme brahman can be perceived even without words would be refuted with this thought. So, the real purport of this statement would have to be understood thus: This statement only means to refute the limitedness of bhagavAn due to His being denoted by mere limiting words, although bearing divine names befitting His extraordinary forms in reality. This is also confirmed elsewhere by sage parASara thus: “Behold! That vishNu has entered into your womb, whose names, deeds and forms know no bounds, and who is expounded by all the scriptures!”

It is said that there is no need to dissect a name into its constituent words to understand the meanings of it. Even if one finds a reason for such dissection, it is not prescribed because the names are really not intended for it. This is because, every name of the Lord has its own meaning on the whole, and that name itself becomes a source of knowledge to know about bhagavan. None of the names have any opposition by anyone. Also, as said in the statements “those names derived out of His qualities…”, and “since you all know His greatness, chant His name…” it can be comprehended that the various names of the Lord have the only intention of telling us about His divine qualities.

Even if the names of the Lord just help in remembrance of His divine qualities, just as in manthras, they do not lose their true nature of granting the Lord Himself to the chanter. This is a well established fact. That is why bhIshma expounded the greatness of such names of the Lord – both in the beginning as well as at the end of this chapter, and carefully placed the thousand names in between in order to remember Him. Among these names, each one of them is independent of the other, and each of them is equally capable of conferring all desires of the chanter. This is
established from the fact that each of such individual names is capable of
transforming into a mantra in itself, as can be seen in the famous twelve-syllable, eight-syllable, six-syllable and other such mantras in the bhagavat-shastras. Each of such names can independently be used for fulfilling all kinds of desires by a seeker. This is also shown by the scriptural statement ‘nAmachith vivakthana’ (chant His name) by the usage of singular form for the word ‘name’.

Although the divine names of the Lord are capable of conferring infinite fruits upon the chanter just by mere pronunciation, knowing the real meanings of each of such names will only help the chanter realize His unlimited auspicious qualities, and his mind is soothed and purified instantly. That is why it is said in the chapter that explains the divine names in the SAnthi parva of mahAbharatham thus: “vyAsa glorified madhusUdhana by chanting His various names along with his disciples. Oh holy one! Please explain the meanings of those divine names to me. Hearing with all attention about the Lord of even the four faced brahmA; I shall be purified from all sins and blemishes, just as the autumn moon is free of all blemishes.

We should also see dhritharAshtra’s words in this regard: ‘Oh sanjaya! I ask you again, tell me more about that lotus eyed bhagavAn, knowing whose divine names and deeds, one attains that Supreme Soul Himself”

We can also learn about the various usages of these divine names of the Lord along with their characteristics from the various chapters such as in udhyOga parva, mOksha dharma, vaishNava dharma, nAma-nirvachana adhyAya etc, as also in the various manthra kalpas (prescription of manthras) in the vEdhic scriptures.

Thus ends the introductory chapter (upOdhghAtha prakaraNam) in SrI bhagavadh-guNa-dharpaNa, which is an explanation of Sri vishNu sahasranAmam by the scion of SrI haritha clan, the son of SrIvathsAnga miSra (kUraththAzhwAn) – SrI ranganAtha by name, also called SrI parASara bhatta, who wrote this glorious commentary at the behest of SrI rangarAja (emperumAn himself).