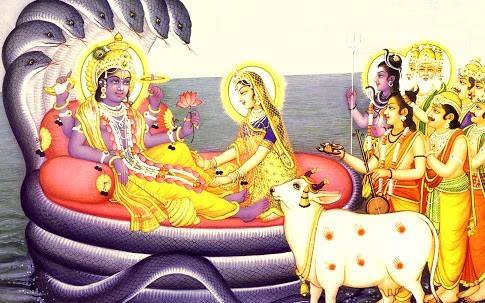 Sixth pAsuram. parAnguSa nAyaki is explaining how the beauty of his ear is tormenting her thinking “while we are in the ears, how did we allow these other limbs to go ahead?” They would usually shake their ears and speak!

Ezhaiyarkkum – for helpless girls (who desired without discriminating between favourable and unfavourable aspects)
asurarkkum arakkargatkum – for asuras and rAkshasas (demoniac persons, who oppose emperumAn)
uyvidam – place of escape
evvidam – which?
enRu – asking
ilangi – having (great) radiance
makaram – in the form of fish
thazhaikkum – well grown
thaLirkol – like sprout
pai – having hoods (which are expanded due to being in contact with emperumAn‘s divine form)
vidam – having poison (which cannot be handled by enemies)
pAmbu aNaiyAn – one who is having thiruvanthAzhwAn (AdhiSEshan) as mattress
thiru – attractive
kuNdalam – having earrings
kAdhugaLE – ears
onRum – in any manner
kaividal inRi – without giving up
aduginRanan – tormenting
kANmingaL – you all see.

The divine ears having attractive earrings which are in the form of fish and are like well grown sprouts, of one who is having hooded, poisonous thiruvanthAzhwAn as his mattress, are tormenting me in all manner without giving up saying “which is the place of escape for helpless girls, asuras and rAkshasas?” – you all see. The enjoyable earrings are harmful for enemies due to their [ear rings] being unable to bear their [enemies] sight. She is saying “kANmingaL” (see for yourself), thinking they will also have that vision.