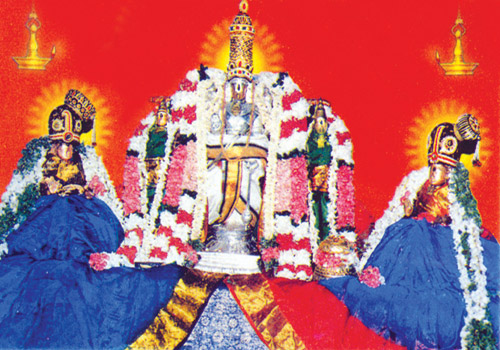 In the fifth pAsuram, parAnguSa nAyaki‘s mother scolds her saying “This urging does not fit your femininity” and she says “I have lost it long back; instead of taking me there when there is no use, you leave me in thenthriruppEreyil now”.

(you neither fulfilled my desire nor had your desire fulfilled);
en – what
seydhIr – did you accomplish;

I lost my femininity to krishNa, the great benefactor who kicked the wheel showing his anger due to the delay in getting mother’s milk, drank from the bosom of the demoniac woman who came in the form of his mother, went between the [twin] arjuna trees and threw the demon who came as a calf on the demon who stood as a wood apple fruit. Now, oh mothers! what did you accomplish by controlling me? Take me to thiruppEreyil which is having well blossomed garden and where he is mercifully seated after arriving there on his own initiative, without any delay and show him to me.

The mothers said ” You think about him, if you cannot forget his favours. But you should also think about our favours of giving birth to you and raising you!” She replies