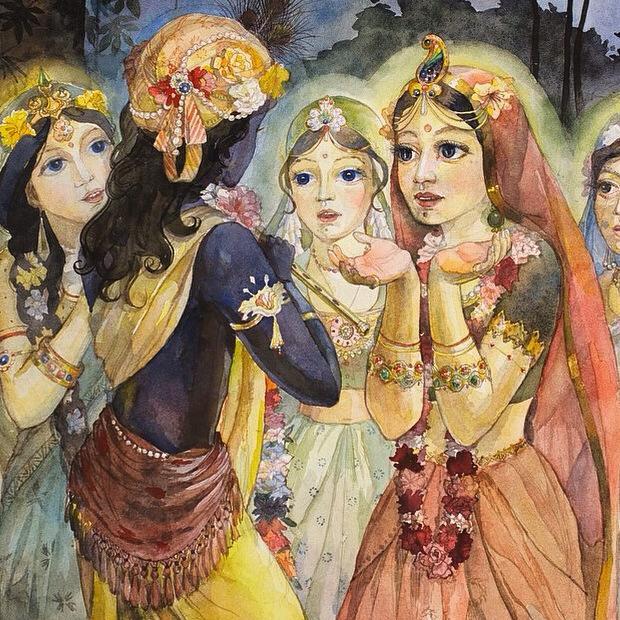 Subsequently, parAnguSa nAyaki says “It is inapt for you who are having the greatness of protecting all the worlds without expecting any benefit in return, to touch us and grab our doll”.

Seventh pAsuram. emperumAn went through all difficulties which SrI bharathAzhwAn had gone through by pursuing many means towards him, with parAnguSa nAyaki and her friends. SrI bharathAzhwAn struggled greatly to bring SrI rAma back as said in SrI rAmAyaNam ayOdhyA kANdam 82.19 “vinivarthayithumbalAth” (I am going to pursue all means to bring SrI rAma back). I will make sure that he himself will show his mercy; should he hear it from anyone else? – SrI rAmAyaNam ayOdhyA kANdam 111.14 “SEshyE purasthAth SAlAyA yAvan mEna prasIdhathi” (I shall remain lying down at the entrance of SrI rAma’s hut until he returns to ayOdhyA); he said “purasthAth” (in front) [so his efforts are clearly visible to SrI rAma]. Similarly, though emperumAn tried hard various means, they remained firm to not let him get closer; he thought “what shall we do next?”; he determined “let us accomplish this task by force”, and set out to pick up their doll; as said in “prEkshithagyAsthu kOsalA:” (the residents of kOsala kingdom will read the thoughts of others based on the way they see), since they can read emperumAn’s thoughts, everyone picked up her doll; emperumAn thought “this is what we wanted too”. He thought “now, I don’t have to go and try with every one of them [since they have all collectively taken their doll]”. He did not have to hold everyone’s hand individually [by assuming multiple forms] as he did in thirukkuravai (rAsa krIdai); he thought “this is a good opportunity” and went and grabbed their doll.

engaL – our
kaiyil – in the hand
pAvai – doll
pArippadhu – touching and grabbing
kanmam – apt acts
anRu – not;
kadal – submerged in the causal ocean
gyAlam – world
uNditta – consumed and protected by placing in stomach
ninmalA – Oh one who is having radiance due to doing that as a great accomplishment!
nediyAy – Oh one who is having greatness (of letting them out and protecting them thinking “what I have done is not sufficient”)!
unakkum – even for you (who are having such greatness)
pizhai – mistake (of touching and grabbing the doll from us, the helpless girls)
pizhaiyE – is a disgrace;
nI – you (who are great in this manner)
vanmam – (saying “Shall I touch you? Who were you thinking before?”, reminded us about our previous union) secrets (which cannot be thought about or spoken about by us)
emmai – towards us
solli – telling
viLaiyAdudhi – teasing playfully;
ennaimAr – our brothers
adhu kEtkil – if they hear that
thanmapAvam – will not analyse whether it is right or wrong;
ennAr – will not prove
oru nAnRu – one day they will come
thadi – picking up a stick
piNakku Am – will engage in fight.

Touching and grabbing the doll in our hand are not apt acts; oh one who consumed the world and protected it by placing in stomach when it was submerged in the causal ocean, and is having radiance due to doing that as a great accomplishment! Oh one who is having greatness! Even for you, such an act is a disgrace; you are telling us secrets and teasing us playfully; if our brothers hear that, they will not analyse and prove whether it is right or wrong; one day they will come with a stick and engage in fight [with you].

emperumAn asks – How come you are telling me “you are doing what is not allowed to be done”! Isn’t it I who set the rules of what can be done and what cannot be!”.

On hearing this from them, as he could not give an apt reply, he set out to whisper in their ears, what could not be shared with others; they are saying “vanmamE solli” (saying secrets). Only their hearts and his heart know about those; and it cannot be explained explicitly.

He again tried to say something.

emperumAn asked “So what? Would they know that? They are not here now!”, they said,

He asked “Alright! What would they do when they come to know?”, they said