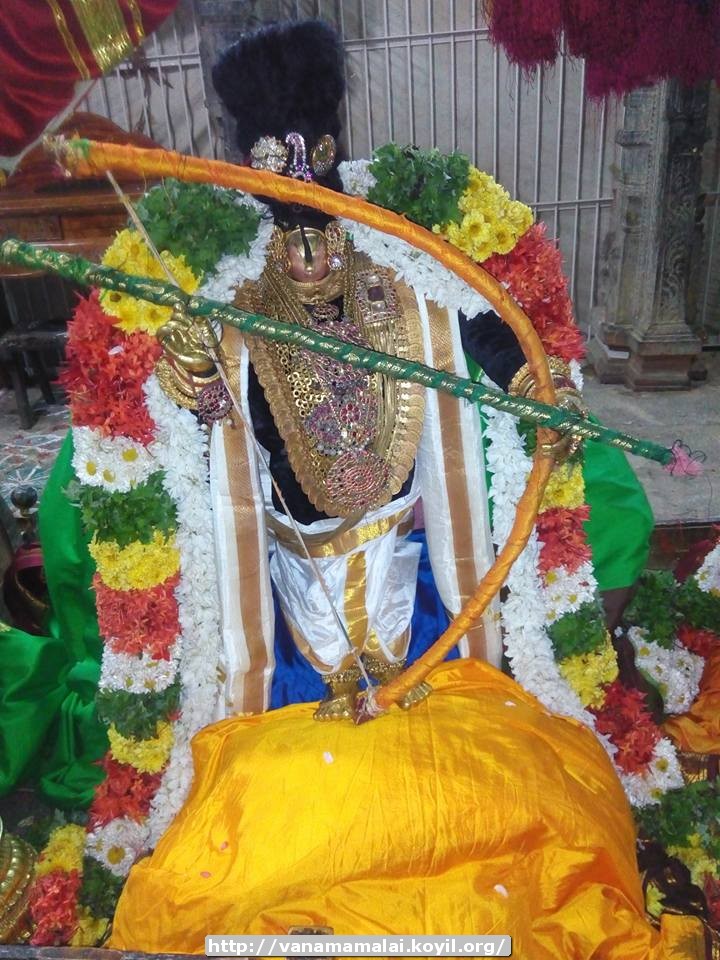 In the second pAsuram, AzhwAr says “If there are hurdles in attaining your divine feet, you have to remove those yourself and protect me out of your own mercy”.

Second pAsuram. emperumAn says “Just by saying ‘ARREn’, what will you get? Hurdles still exist”; AzhwAr says “As you eliminated the hurdles for sIthAp pirAtti, you should mercifully eliminate my hurdles too”.

anguRREn – entered into your apt abode, having you as ready means
allEn – I have not

(being desireless thinking “One who does not have any upAyam (means), should remain patient”)
inguRREn – remaining patiently where I am now
allEn – I am not;
unnai – you (who are infinitely enjoyable)
kANum – to enjoy
avAvil – due to love
vIzhndhu – being captivated
nAn – I (who am grieving)
enguRREnum – in the state of worldly people too
allEn – not present;
ilangai – lankA which was a hurdle for your devotee (sIthAp pirAtti)
seRRa – destroyed and attained
ammAnE – Oh my distinguished lord!

I have not entered into your apt abode, having you as ready means; I am not remaining patiently where I am now; being captivated in love to enjoy you, I am not present in the state of worldly people too; Oh my distinguished lord who destroyed lankA which was a hurdle for your devotee (sIthAp pirAtti) and attained her! Oh one who is having special weapons which are both meant to destroy the enemies of the devotees and being enjoyable for the devotees and who is residing eternally in SrIvaramangala nagar which has rising mansions which are with abundance of emeralds and reach up to the moon! Mercifully bless me who is lonely without anyone other than you as companion.

[This is explanation given by nampiLLai]

When emperumAn said “Yes I have done all of that. But now, the times have changed. rAmAvathAram is over long ago”, AzhwAr says “you have solved that issue as well”.

When asked “Even if he is present there, does he have the tools [to eliminate the hurdles]?”, AzhwAr replies,

emperumAn says “Everything is perfect on my side; but you too should not be lacking in anything [i.e., you too should have the desire to attain me]”, AzhwAr replies,

emperumAn asks “Alright. What shall I do now?”, AzhwAr says,