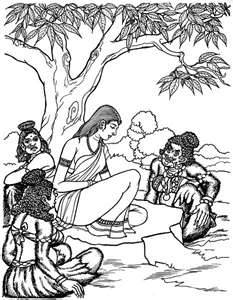 In the fifth pAsuram, AzhwAr mercifully and clearly explains that his fault is prakruthi sambandham (relation to material realm).

Subsequently, AzhwAr saying to emperumAn “You are the one who bound me into the prakruthi” and explaining that eradication of such relationship with material realm is fully at emperumAn’s disposal.

(due to not having the enjoyment)
naNNa killEn – remained like those who have not attained you;

(the reason for that is)
naduvE – staying in between (to not have the connection with the AthmA and you who are opposite of all faults, to push away both)
Or – a
udambil – in body
ittu – placing and establishing the connection
pala – in many ways
sey – to be performed due to the bondage in body
vinai – karmas
val kayiRRAl – with strong ropes (bondage)
thiNNam – to be firm
azhundha – difficult to examine
katti – tie
puNNai – external faults
maRaiya – to conceal
varindhu – surrounding forever
ennai – me (who is incapable and unsuitable to remove this bondage)
puRamE – samsAram which is external to you and is filled with superficial pleasures
pOra – to go
vaiththAy – placed me

Even after remaining close to you by the knowledge given by you who incarnated as krishNa, who are favouring the advice with regard to the upAyam and who are letting those who are surrendered to the eternally enjoyable you to enjoy the distinguished form which is attractive and seen by nithyasUris, I remain like those who have not attained you; (the reason for that is) you have placed me in between in a body and established the connection, tied me with strong ropes in karmas which are to be performed in many ways due to the bondage in body, to be firm in that body, are concealing the external faults, are surrounding me forever and are placing me to go into samsAram which is external to you and is filled with superficial pleasures. AzhwAr implies that “If you desire, you can release me from this bondage”.