amudhanAr is joyous thinking about how emperumAnAr came here in this way and won those who dismiss or misinterpret vEdhas and thus gave divine knowledge, and is joyous about what were achieved due to that knowledge.

In the previous pAsuram – amudhanAr showed how as emperumAnAr came here the other debaters’ existence was uprooted; in this pAsuram – he talks in many ways about the removal of debaters who dismiss or misinterpret vEdhas, and the enrichment of the people of the world, due to emperumAnAr’s praiseworthy knowledge.

nam – our lord
irAmAnusan – emperumAnAr
thandha – helped by giving
gyAnaththilE – the knowledge; due to that knowledge –
like how where there is grass there would be weed also,
thollai vAdhiyarkku – those who dismiss or misinterpret vEdhas who debate with very old arguments –
vAzhvu aRRadhu – their such existence was done with;
like how after weed is removed the grass would grow up and flourish, because of those other philosophies getting removed,
enRum maRaiyavar tham – at all times, the ones who correctly follow vEdhas (vaidhikas) – their …
thAzhvu aRRadhu – … degradation was removed;
as said in ‘ERRa vallAr thiridhalAl thavam udaiththu ith tharaNi thAnE’, due to the those of other philosophies losing, and with vaidhikas gaining strength and going to places in the world,
thAraNi – earth
thavam peRRadhu – got such fortune;
thaththuva nUl – in the SAsthrams that are based on truth,
kUzh (ellAm) aRRadhu – all doubts were gone;
guNaththinarkku – for those with the nature of
kuRRam ellAm padhiththa  – having all blemishes embedded,
an nAzh aRRadhu – that drawback was removed;

Oh! what wonderful greatness of such knowledge (from emperumAnAr) – is the thought.

nam irAmAnsan thandha gynaththilE – emperumAnAr who is the set lord of ours, due to his adherence to his kindness, voluntarily helped by giving the knowledge – due to that knowledge;

Now, amudhanAr explains about the result of such knowledge, starting with ‘vAzhvaRRadhu’.

vAdhiyarkku – for the debaters of other philosophies such as Sankara, bhAskara, yAdhava, bhAtta, prabhAkara, baudhdha and chArvAka;

thollai – vAzhvaRRadhu – the wellness/existence of those debaters before emperumAnAr’s incarnation was – while having accepted vEdhas, their ignorance of its meanings and so imagining wrong meanings to it, and authoring some texts, and spreading it among people of the world and taking them in lowly paths, or, superimposing some blemishes on vEdhas and saying that vEdhas are not the authoritative reference – such living of theirs got rooted out after emperumAnAr incarnated and helped with the knowledge;

The word “enRum” (at all times) is adjective to both the phrases (the aforementioned and the one following), by way of kAkAkShi gyAyam (by applying sideways to different contexts (named after how a crow sees sideways)).

(emperumAn forgets (does not keep track of) all the good help/things He gave to everyone;  also He forgets all the mistakes they do against Him; His grace is about His play of forgetting;  (so forgetting is the common theme here));  (in the same way, removing is the common theme as emperumAnAr removed the existence of those other debaters, and removed the difficulties of the vaidhkas); So it is about his ability to do the removal of the unwanted (in both sets of people).

For those who properly follow the four vEdhas, before his incarnation, since those who dismiss or misinterpret vEdhas had spread all over the world, the ways of vEdhas had declined – that decline got removed forever due to emperumAnAr; 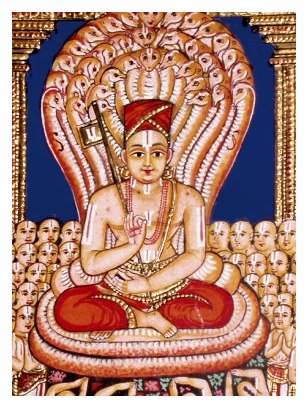 the word “thollai”  (from old/earlier time), is to be applied to the second phrase as well :

thollaiyAna thAzhvu – the decline without any break, from time eternal;

thAzhvu enRum aRRadhu – hereafter in the future, with no chance of coming back ever, it went away without any trace/scent of it.

In this world when a land owner sets it for growing paddy, where weeds would grow and spread fully and would not allow paddy to raise its head, and then the ones who know how to rectify this would remove those weeds and make the paddy grow,  in the same way, emperumAnAr made the amicable ones who were the target of kindness of emperumAn to flourish at the time when they were downtrodden due to those other debaters.

thavam thAraNi peRRadhu – the earth got the fortune.  Only after saying ‘parithrANaya sadhUnAm vinASaya cha dhushkruthAm [SrI bhagavath gIthA 4.7]’, (for protecting the devotees and to remove the miscreants), did He say ‘dharma samsthApanArthAya’ (and to reestablish the principles of religion (dharmam)). (so after one happened, then the other good thing happens);

After the other debaters had lost and were not found in the world, then the devotees got their troubles removed and they flourished, so, dharmam spread everywhere in the world;

thaththuva nUl kUzh aRRadhu – parAvara thathva  -> para avara thathva -> eeSvaran, and (sentient, non-sentient); vEdham that is in the form of SAsthram, which showed as is about the three – eeSvaran, sentient, and non-sentient, was disturbed by those who misinterpreted vEdhas (saying that these three are one, etc.),  all these days such vEdham was transgressed by many such people,

emperumAnAr gave the knowledge to the people, and established correct meaning for vEdhas – so the disturbance went away and so the true meaning became bright without any doubts/danger.

Also, due to his teaching, the ones who wished to learn got all doubts cleared in SAsthram that shows truth as is.

for those having the nature of having all sins spread in them, those sins went extinct due to the establishment of knowledge in them by emperumAnAr.

amudhanAr is joyous, thinking – Oh! what greatness this is!

thollai vAdhiyarkku – the debaters are of current age, but their arguments have been around for a long time.

thavam thAraNi peRRadhu – as the noble ones got their strength back and went around to all places in the world, the earth got the fortune of touch of their divine feet.