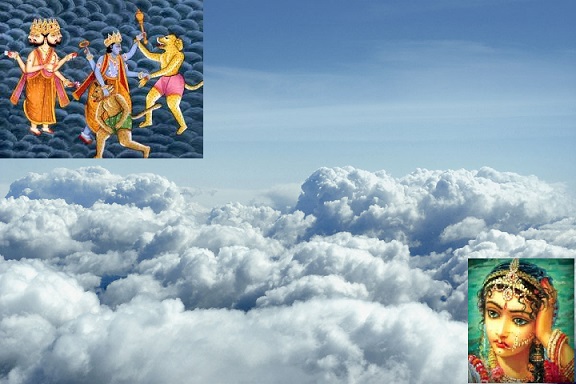 In the fifth pAsuram, looking at the clouds which are falling down as rain, parAnkusa nAyaki becomes sad saying “you too are captivated like me by emperumAn‘s qualities, activities etc., and are suffering  due to that”.

In the fifth pAsuram, seeing a cloud which is falling down as rain, parAnkusa nAyaki says “did you also become captivated in his valour?”.

Fifth pAsuram – At that time, a cloud falls down as rain; She asks it “did you also become captivated in his ability to destroy the enemies?”.

thOzhiyarum – girl-friends (who are equally pained as I am)
yAmum pOl – like us (who are in pain)
ulagukku – to fill the world
nIr koNdu – with the water
UzhidhORUzhi – forever
nIrAy – in the form of water
negizhginRa – falling down
vAnamE – Oh cloud!
nIyum – you who are most generous
madhusUdhan – one who killed madhu
pAzhimaiyil – great valour
pattu – being captivated
avankaN – towards him
pAsaththAl – out of affection
naivAyE – become weak
vAzhiya – may you live long after being relieved from this pain

Oh cloud which is falling down as rain to fill the world like my friends and I [who are also longing and falling into pieces]! It appears that you have also been captivated by madhusUdhanan emperumAn‘s valour and become weak. Those who are generous, when in separation from bhagavAn, will become weak.

You have good examples [in us].