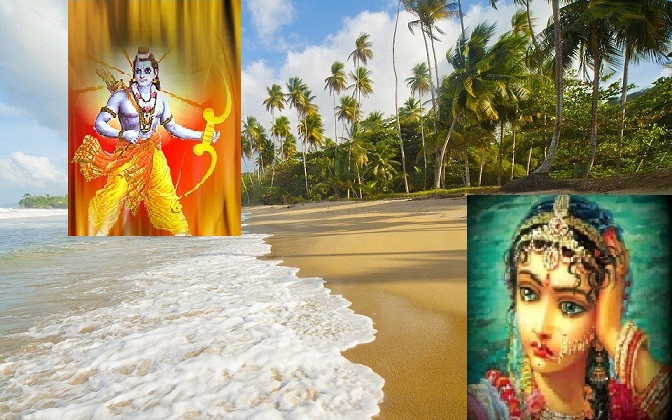 In third pAsuram, parAnkusa nAyaki, on seeing the sea with noisy tides asks “Did you also become captivated by the qualities of srI rAma and suffer due to that?”.

Subsequently, on seeing the noisy sea, she tells “Did you also become like me who desired for the divine feet of the one who eliminates the enemies?”.

Third pAsuram – While feeling bad for the cry of ibis, she sees the sea which is a great entity, losing its composure, trying to reach the shore and retracting from there, and making noise which does not have any meaning, like a dumb-person’s speech, and asks “Are you also suffering like me after being captivated in the qualities of srI rAma?”.

kAmuRRa – enjoyment that was desired for
kaiyaRavOdu – being sad for not accomplishing them
nI – you
irAp pagal – night and day
muRRa – fully
kaN thuyilAy – not sleeping
nenju – even inside your heart
urugi – melted
Engudhi – calling out
Al – thus
thennilangai – lankA
muRRa – fully
thI UttinAn – one who set fire
thAL – divine feet
nayandha – desired
yAm – us
uRRadhu – whatever happened
uRRAyO – did you also experience?
kanai – making noise
kadalE – Oh sea!
vAzhi – may you live long (after having your sorrow eliminated)

Oh noisy sea! Like one who did not accomplish his/her desires fulfilled, you are not sleeping night and day; you are also calling out from your heart; thus, I ask you “Like us, did you also desire for the divine feet of srI rAma who set fire in lankA and become affected by that?”. May you live long (after having your sorrows removed).