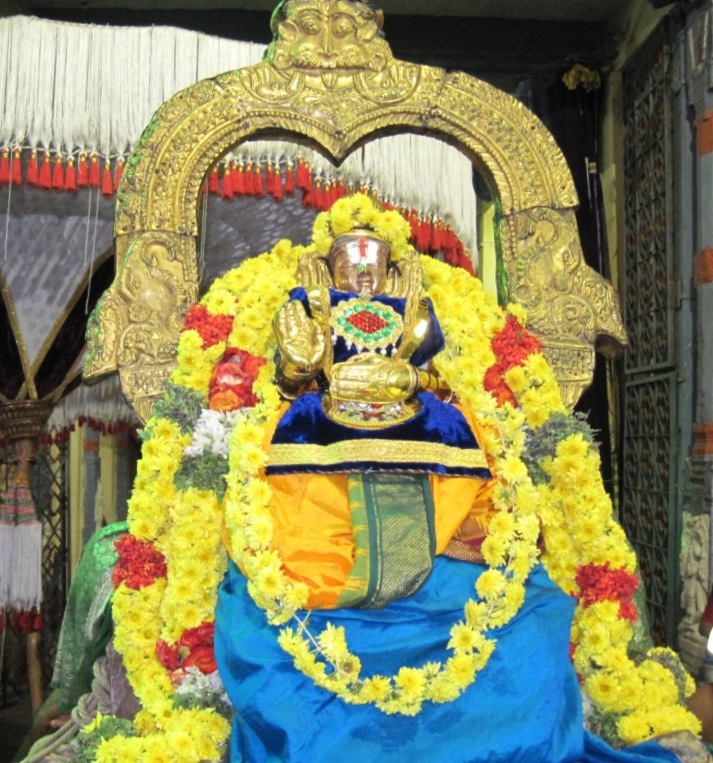 In the end – AzhwAr identifies the result for the ones who learned this decad.

Subsequently, AzhwAr mercifully says that the result of this decad is that for those who are engaged in this padhigam, there is no sorrow in contemplating their own lowly nature.

In the end – AzhwAr says that for those who learned this decad, there is no sorrow of saying “I am unqualified” and leaving emperumAn.

In the end – AzhwAr says that for those who can recite and meditate on this decad, they need not go through the suffering of not having emperumAn, considering oneself unqualified and leaving him like AzhwAr had to go through.

mAlE – Oh the one who has natural greatness due to being superior to everyone!
mAyap perumAnE! – Oh the one who has unlimited amazing qualities (which are capable of placing an eternally materialistic person amidst the eternally liberated souls)!
mA mAyanE! – Oh the one who has unlimited wealth, forms and activities!
enRu enRu – thus meditating (the greatness of being the master, being the means and being the goal)
mAlE ERi – being bewildered (that we will leave meditating upon one’s own lowly nature)
mAl – of the sarvEsvaran who has unsurpassed motherly affection
aruLAl – out of infinite mercy
mannu – approaching after being convinced
kurukUrch chatakOpan – nammAzhwAr‘s
pAlEy – sweet like milk
thamizhar – ones who are learned in thamizh prose
isaikArar – ones who are learned in music and can sing
paththar – ones who are devotees who understand and relish the meanings
paravum – celebrating
Ayiraththin pAlE – in these 1000 pAsurams of thiruvAimozhi
patta – in (like “kadalilE muththup pattadhu” [pearls are in the ocean])
ivai paththum – this decad which explains emperumAn‘s auspicious qualities
vallArkku – those can recite it with the appropriate mood
parivathu – sorrow (out of separation due to considering oneself as lowly and shying away from perumAL)
illai – not there

AzhwAr, being bewildered (out of his own humility), calls out to emperumAn – Oh the one who has natural greatness due to being superior to everyone! Oh the one who has unlimited amazing qualities! Oh the one who has unlimited wealth, forms and activities! – and meditates upon his auspicious qualities. After being bewildered and desiring to leave emperumAn, he was convinced by the infinite mercy of emperumAn (to be together) in this decad which is part of AzhwAr‘s thiruvAimozhi (1000 pAsurams) which are celebrated by those who are well-versed in thamizh, those who are well-versed in music and can sing this and those devotees who understand the meaning. For such persons who can recite this decad with the proper attitude/mood, they do not need to go through the sufferings in separation like AzhwAr had to go through.

In the next article we will enjoy the next padhigam (decad).