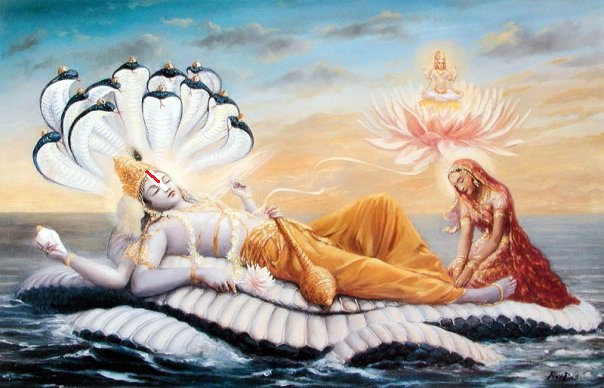 Like mentioned in avathArikai, in this prabandham AzhwAr speaks about his inability to do anything, and about emperumAn’s ability to do everything, and pleads Him to get him out of this samsAram, as he surrenders to the lotus feet of thirukkudandhai ArAvamudhan.

This section starts with the first two lines of the prabandham.

The numbers in parenthesis show how the pAsuram is constructed with reference to the numbers used in there to match the structure of a chariot.

Word-by-word meanings
iru – (from the) big
thavisil – seat (also petals of the flower)
undhi – (that is your) divine nAbhi (navel)
malar – (which is like a lotus) flower
pEr – (that is having the) greatness (of)
oru – having no equals,
oru muRai – at one time (during creation)
InRanai – you created
ayanai – brahmA

Due to your causeless mercy (nirhEthuka krupai), when the whole world did not exist after praLayam, you made them all come into existence. You created the worlds, and created brahmA from your lotus like navel that is big and which has been there forever; and staying as antharyAmi inside him, you created sentient and non-sentients including humans. For you who is the cause of all these, is it hard to do the favor (of giving mOksham) to them?

‘oru’ pEr undhi – shows the supremacy of the navel (nAbhi) of emperumAn which created brahmA. ‘pEr’ implies old – been there for long time (ever).

Since brahmA was created without the union of man and woman, he is called ‘ajan‘, or, ayan in thamizh.

‘oru muRai‘ – once upon a time, (long ago) – since he creates brahmA after every praLayam, this is a continuous occurrence.

By talking about creation of brahmA it is implied about the creation of other things before that. That is, when everything was indistinguishable and lacked any name or shape, and were together with emperumAn, and referred to as ‘avibhaktha thamas’, He changed them to be distinguishable and referred to as ‘vibhaktha thamas’, in manifested state, and then created small parts of states out of it like ‘aksharam’, ‘avyaktham’, and then after that, created mahAn, ahankAram, and then from that ahankAram created five objects of senses (sabdha (sound), sparsa (touch), rUpa (form), rasa (taste), gandha (smell)), and created pancha bhUthas – 5 great elements – AkAsa (ether), vAyu (air), agni (fire), Apa/jala (water), pruthvi (earth), and created the worlds from the pancha bhUthas. These are called samashti srushti which he created by his sankalpam (divine will). Then the vyashti srishti: You created brahmA in order to create beings of four types, dhEvas (celestial beings), humans, animals (thiryak), and plants (sthAvaram), while being an antharyAmi inside brahmA. (These are also explained in piLLai lOkAchariAr’s thathva thrayam, and maNavALa mAmunigaL has written an eloquent vyAkyAnam for that grantham).

thirumangai AzhwAr is saying these to imply that like how when a farmer plants something, it is he who would take care to remove the weeds and protect the planted, “Is it difficult for you to provide greatness (mOksham) to these beings, for you who created all these so easily and for you who controls our existence?”.

One thought on “thiruvezhikURRirukkai – 1”