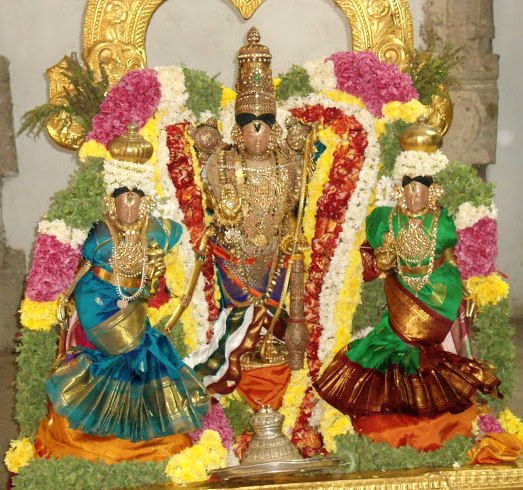 In the seventh pAsuram, AzhwAr says “Groups of maruthas and vasus even crossed their boundaries, went as far as they could and praised the SrIvaishNavas”.

thodu kadal kidandha – mercifully resting in the deep ocean
em kEsavan – being kESava who is the creator of everyone such as people like me, dhEvas starting with brahmA, and nithyasUris

(as they are travelling fast due to their urge in enjoying bhagavAn)
engum thodarndhu – following everywhere
thOththiram sollinar – uttered praises.

emperumAn, mercifully resting in the deep ocean, being kESava who is the creator of everyone such as people like me, dhEvas starting with brahmA, and nithyasUris, having rising and radiant divine crown which has abundance of precious gems, is mercifully resting in thirukkudandhai as krishNa; the consorts of maruths and ashta vasus praised the servitors who are serving such emperumAn for generations; as they praised, the maruths and vasus followed the SrIvaishNavas everywhere and uttered praises. thodudhal – thONdudhal (digging) – indicates the depth.

To ensure that those who are subsequent to his incarnation, do not miss out, one who is mercifully resting in thirukkudandhai,