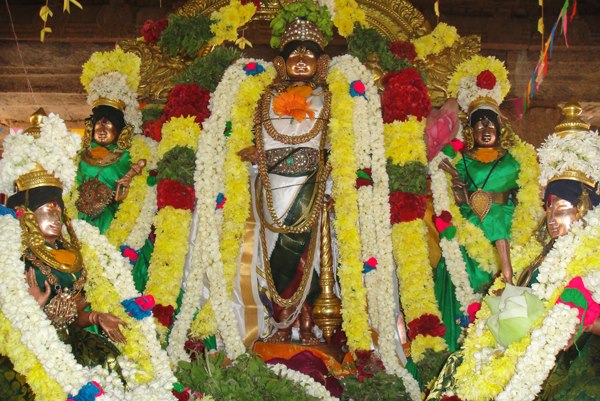 In the fifth pAsuram, AzhwAr says “emperumAn united with me, heard thiruvAimozhi from my mouth and due to the uncontrollable, overflowing bliss on hearing thiruvAimozhi, is singing like nithyasUris and mukthAthmAs, swaying his head”.

naNNA – those who remain as obstacle, not desiring to acquire (bhagavath vishayam)
asurar – demoniac persons
nalivu eydha – to be destroyed (unable to bear this greatness)
nalla amarar – the divine persons, who have devotion and are favourable

(hearing and enjoying)
inbam thalai siRappa – being deeply joyful
paN Ar – filled with tune
pAdal – having music
in kavigaL – sweet poems
yAnAy – being I (who am his prakAra (attribute))
thannai – him (who is praiseworthy and who likes to be praised)
thAn pAdi – being the one who praise, and sang
thirumAlirunjOlaiyAn – standing as the lord of thirumAlirunjOlai
en ammAn – my lord

(without seeing his greatness, and due to the very enjoyable nature of the song)
thennA ennum – swaying his head, will sing.

To have those demoniac persons who remain as obstacle, not desiring to attain him, destroyed, to have the divine persons, who have devotion and are favourable, acquire opulence, and to give deep joy to very devoted meditators, who  due to love, desire greatness which were never thought about previously over and above the qualities and wealth of emperumAn who is avAptha samastha kAman, my lord who is standing as the lord of thirumAlirunjOlai, sang these sweet poems with music and filled with tune, on him, through me; he will sway his head and sing these pAsurams.

thiruvAimozhi came into existence to destroy the demoniac persons, to give opulence to the devotees and to give deep joy to those meditators who desire for new greatness to emperumAn. Just as the incarnation of the one [emperumAn] is praised, the incarnation of the poems is also glorious; SrI bhagavath gIthA 4.8 “parithrANAya …” (I am born in many ways in every yuga to protect the virtuous, to torture and destroy the wicked and to establish dharma firmly). As said in SrI vishNu purANam 5.3.2 “akila jagath padhma bOdhAya” (krishNa, the sun, appeared to blossom all of the worlds which are like lotus).