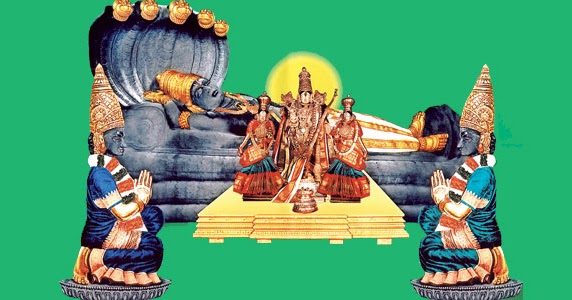 In the sixth pAsuram, parAnguSa nAyaki‘s say “he is not easily approachable as you say, but is unreachable” and she says “Whether he is difficult to attain or easy to attain, instead of calling out for emperumAn who inflicted this suffering upon us, can we be upset with those who are unrelated to us?”.

ninaikkungAl – if we try to analyse
thollai – distinguished
am – unlimited
sOdhi – his radiance
en – my
sol aLavu – within my speech
anRu -not;
imaiyOr thamakkum – for (greatly knowledgeable) brahmA et al

(instead of he who tormented)
Arkku – for whom
pUsalidugO – will call out;

If we try to analyse his unlimited, distinguished radiance, it is not within my speech; his greatness causes endless doubt in brahmA et al; emperumAn who is mercifully resting in thirukkudandhai which is surrounded by flower bearing creepers and beautiful fields, who is having great affection towards his devotees, captured my complexion; he is not giving his thuLasi garland which resembles a blossomed flower garland; now, oh friends! Please tell! For whom will I call out?

Is it because of my being a helpless girl that it is difficult to speak about his greatness?