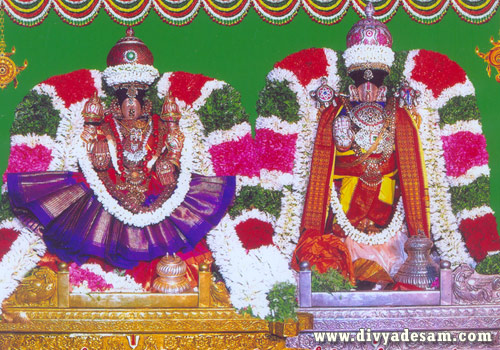 pEyAzhwAr says that due to the grace of poygai AzhwAr and bhUdhaththAzhwAr, he was able to see fully emperumAn, who is the consort of thirumagaL (SrI mahAlakshmi), as if he had seen an ocean of rubies. Since this prabandham (collection of 100 verses) speaks after seeing emperumAn, without any order, this thiruvandhAdhi does not come easily for anyone. Isn’t it for this reason that it is said that the one who mercifully gave this thiruvandhAdhi is pEyAzhwAr! kulaSEkara AzhwAr has mercifully mentioned in his perumAL thirumozhi 3-8 “pEyarE enakku yAvarum yAnumOr pEyanE ….. pEyanAyozhindhEn emperumAnukkE” (to me, all the people of this world appear like manmen. To the people of this world, I too am a mad man. What is the point in talking about this matter? I am calling out to emperumAn by his divine names and to such emperumAn too I became a madman). The first thiruvandhAdhi came about from bhakthi (devotion) which was showered by emperumAn. In the second thiruvandhAdhi, since it has been divinely mentioned in pAsuram 100 “enRan aLavanRAl yAnudaiya bhakthi” (the affection that I have for you cannot be retained within me) it transformed into parabhakthi. After that parabhakthi, sighting emperumAn directly has been mentioned. pEyAzhwAr says that since emperumAn showed himself up he was able to see him. The first AzhwAr (poygai AzhwAr) says that emperumAn has both nithya vibhUthi (spiritualistic realm) and leelA vibhUthi (materialistic realm). The second AzhwAr (bhUdhaththAzhwAr) says that the divine name of that emperumAn is nArAyaNa. [The third AzhwAr] pEyAzhwAr says that one has to add the word SrI to that divine name (SrIman nArAyaNa). The first thiruvandhAdhi speaks about “vaiyam thagaLiyA” which is gyAnam (knowledge); i.e. the knowledge that emperumAn is the lord and we are his servitors. The second thiruvandhAdhi speaks about “anbE thagaLiyA” which is parabhakthi which comes about due to maturing of the knowledge seen earlier. The third thiruvandhAdhi speaks about sAkshAthkAram (seeing directly) which is the next stage of parabhakthi. poygai AzhwAr spoke about the nature of emperumAn. bhUdhaththAzhwAr spoke about the nature of jIvAthmA. pEyAzhwAr speaks about the nature of the entity which is the base for both (pirAtti’s?). When emperumAn churned the ocean, dhEvas who were merely spectators obtained nectar. This AzhwAr says that in the same way, he was able to have dharSan (vision) of emperumAn due to the grace of the first two AzhwArs.

We shall move on to the first pAsuram next.