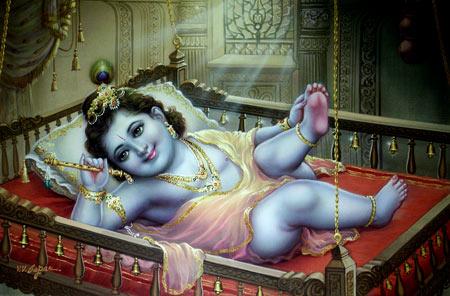 In the sixth pAsuram, AzhwAr says “I who have not seen all your activities, am not even capable of thinking about them; so, you should mercifully make me sustain myself and meditate upon you”.

Sixth pAsuram, AzhwAr says “I desired to see all your activities, and am not even capable of thinking about them; so, just as you protected the universe, you should mercifully protect me and make me meditate upon you”.

(similalry, in the heart of his devotees, as said in “thishtan” (standing firmly), “AsathE” (being seated) and “chEthE” (resting)), living as established in pramANam (SAsthram))
ninaippu – to think about
ariyana – difficult;

(in this manner)
onRu – any single
alA – not restricted to
uruvAy – having form
aruvAya – not seen for me to experience
nin – your
mAyangaL – amazing activities
ninRu ninRu – tormenting the already weakened heart at every stage
ninaiginREn – trying to fully think about;
unnai – you (who are performing the activities which weaken me)
enganam – how
ninaigiRpan – can think about in a focussed manner?
pAviyERku – for me who am having sin (which stops me from meditating in a focussed manner)
ulagam – universe which was getting destroyed in the deluge
uNda – consumed and protected
oN sudarE – Oh one who became radiant!

(to save me from drowning in this ocean of weakness and to have me say “sthithOsmi” (I am stable))
onRu – unique
nangu – distinguished means
uraiyAy – you should mercifully indicate.

Your ways of standing, sitting, and resting are difficult to think about; I am trying to fully think about the amazing activities of yours,  who are not restricted to having a single form, which are tormenting the already weakened heart at every stage; how can I,  who am a sinner, think about you in a focussed manner? ; oh one who became radiant by consuming and protecting the universe which was getting destroyed in the deluge! You should mercifully indicate the unique and distinguished means to save me. “ninRavARum, irundhavARum, kidandhavARum” also is explained in context of krishNa standing, sitting and resting in his cradle.