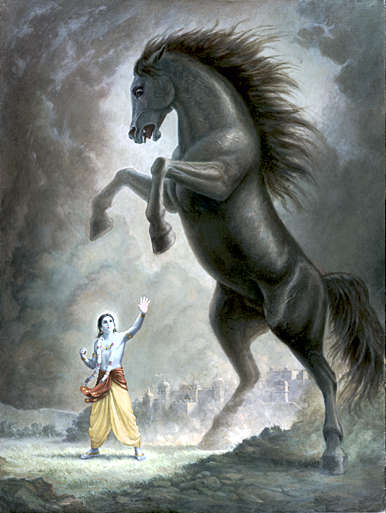 In first pAsuram – AzhwAr says “I have no worries ever, after singing praises of krishNa who being the sarvESvara, divinely and mercifully incarnated as a human being and mercifully protected his devotees”.

In first pAsuram, AzhwAr says “I who got to sing the praises and mangaLASAsanam [well-wishes] for sarvESvara who is the controller of all the worlds, have no worries ever”.

vIRRu – being distinct from every other entity (in being the substratum of all, controller of all, lord of all and pervading everywhere)
irundhu – seated (in the divine throne in the divine realm)
Ezhulagum – seven types of worlds (representing seven types of entities; four types of achEthana (matter) – vyaktha (manifested), avyaktha (unmanifested), kAla (time) and Sudhdha sathva (divine matter) and three types of chEthana (soul)  – badhdha (bound souls in material realm), muktha (liberated souls in spiritual realm) and nithya (ever-free souls in spiritual realm))
thani – matchless (in the form of his divine will)
kOl – sceptre
sella – to conduct
vIvil – endless
sIr – being with groups of auspicious qualities (such as gyAna, Sakthi etc)
ARRal mikku – being with (natural) infinite SAnthi (peace)
ALum – conducting with great natural glories
ammAnai – lord of all
vem – naturally very cruel (which are hurdles for the protected ones as said in “mahAraudhra:‘ (very fierce))
mA – horse (named kESi, which is possessed by a demon)
piLandhAn thannai – sarvESvara who tore its mouth (as said in “nipapAthadhvidhAbhUtha:“)
pORRi enRE – performing mangaLASAsanam saying “pORRi, pORRi” [long live]
kaigaL – hands (which were as said in thiruvAimozhi 4.4.1 “viNNaith thozhudhu” (worshipping the sky))
Ara – to the full satisfaction
thozhudhu – performing anjali (joined palms)
sol – in the form of a collection strung with words
mAlaigaL – garlands [poems]
ERRa – to submit (so he can wear them on his head)
nORRERku – for me who has the puNya (virtue) of his (nirhEthuka (unconditional)) krupA (mercy) (as said in thiruvAimozhi 10.6.1 “vidhi vAykkinRu” (his mercy occurring))
ini – going forward
ezhumaiyum – (as said in “sapthasapthachasapthacha” (twenty one births)) even if I am to be born many more times
enna kuRai – what worries do I have? [implies – no worries]

sarvESvaran, the lord of all, being distinct from every other entity, seated to conduct seven types of worlds with his matchless sceptre, being with groups of auspicious qualities, being with infinite peace, is conducting [all these] with great natural glories; such emperumAn tore the mouth of kESi, the very cruel horse; for me who has the virtue of his mercy to perform mangaLASAsanam to him saying “pORRi, pORRi“, to perform anjali to my full satisfaction and to submit collection of words as garlands, going forward, even if I am to be born many more times, what worries do I have? [implies – no worries]

Would he remain unattainable due to the pride of ruling over both realms?

How long will this remain?