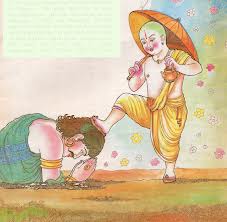 In the sixth pAsuram – AzhwAr vividly explains how emperumAn transformed him to be fully subservient, after bonding with him.

Sixth pAsuram – When asked “what did he do after bonding with you?” AzhwAr replies “He is not stopping with liking my body, he enjoyed my AthmA as well”.

kalandhu – mixing (like water)
en Avi – my AthmA‘s
nalam – wellness (of being distinguished subservient to bhagavAn)
koL – had (as his benefit)
nAdhan – one who is sEshi (master)
pulan – for the senses
koL – Akarshaka (enchanting)
mANAy – having the form of vAmana – a dwarf, celibate youth
nilam – earth
koNdAn – accepted it

vAmana emperumAn, with a youthful celibate dwarf form that is enchanting for the senses (of the on-looker), accepted earth as his. That same master mixed with my AthmA and established my servitude towards him. Here earth is indicated as a sample for other parts of the world which were measured/accepted by vAmana at that time.

AzhwAr says “after winning over me, emperumAn desiring to give more pleasure to me, shows his beautiful form, attracts mahAbali and grabs the world from him”.

Did he stop with that?

Are you the only one who was caught by him like that?