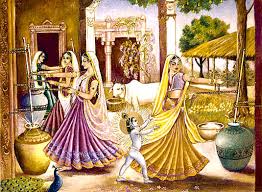 AzhwAr curses himself and moves away from emperumAn. Seeing that, emperumAn shows his true nature as the one having the quality of sustaining himself by being together with his devotees and consoles AzhwAr.

In the eighth pAsuram – Seeing AzhwAr leave, to bring AzhwAr towards him, emperumAn shows his inability to sustain himself in separation from his devotees – AzhwAr becomes amazed at that.

Subsequently – AzhwAr thus tries to move away losing hope. Seeing that, emperumAn shows his great attachment towards his devotees saying “I will not fail those who are bound to me; I cannot sustain myself without them; there is no disrepute for me in being with you and you can see that yourself in my history” and AzhwAr becomes consoled after seeing that.

Eighth pAsuram – When AzhwAr tries to leave like this, emperumAn thinks “He is quite brave; he should be made to understand” and asks AzhwAr “Oh AzhwIr! Have you not heard about the incidents in thiruvAyppAdi (gOkulam)?”  AzhwAr replies “I am unaware of that” desiing to hear about it from emperumAn. emperumAn says “Once upon a time, I rescued the earth and protected it by keeping in my stomach; Subsequently, I released it; I then thought that there may be residue in my stomach – so to have them digested properly, I consumed some butter in gOkulam”. AzhwAr questions “Both events happened at different times. What is the relationship?” emperumAn then asks “So, you tell me – why did I do that?” AzhwAr replies “Because you sustain yourself with the things which are touched by your devotees [butter churned by the cowherd girls], you consumed the butter”. emperumAn says “Just like that butter, you too are very dear to me. In that case, if you don’t present yourself to me, you will reach the same hell as those who hid the butter away from me”. In this pAsuram, AzhwAr repeats emperumAn’s words thinking that he has understood emperumAn’s desire.

mAyOnE – Oh amazing person (who does not get impacted negatively even while mixing with everyone in all aspects)
munnamE – once upon a time
ulagEzh – the seven worlds (which is a sample of all creation)
uNdAy – you consumed
umizhndhu – (without any residue) spat them out
siRu manisar – insignificant humans
uvalai – to be avoided/abandoned
Akkai – body
nilai – position/situation
eydhi – descended/took
mAyaiyAl – in cunning ways
pukku – entered
veNNey – butter
uNdAy – ate
maNdhAn – some residue from the earth that was consumed before
sOrndhu adhu uNdElum – remaining that is present
manisarkku – for the humans
Agum – that occur
bIr – indigestion
siRidhum – even a little
aNdA vaNNam – kept away
maN – that soil
karaiya – to dissolve
ney UN – (in a different incarnation) eating ghee
marundhO – is that a medicine? no

Oh amazing person (who does not get impacted negatively even while mixing with everyone in all aspects)! Once upon a time, you consumed all the worlds and spat them out. Subsequently, you descended as an insignificant human being bound in a body (that is generally considered to be avoided). You ate butter to keep away the indigestion that occurs to humans. Is eating ghee a medicine to dissolve the residual soil? (No).

Consuming the world is also to protect the devotees (jIvAthmAs); consuming the butter also is to highlight that emperumAn cannot sustain without the things which are touched by his devotees. Here veNNey (butter) and ney (ghee) are used as synonyms.

It would not suit well if we say emperumAn was born as srI rAma, stole butter and consumed the same. So,

Consuming the soil is for the sustenance of the worlds. Consuming the butter was to sustain yourself (by being in contact with your devotees).