The concept of “AchArya bhakti” and “devotee’s devotee” was dealt in detail in many pAsurams earlier. Even after that, the importance and significance of devotees (bhAgavathAs), need to be stressed more to the worldly people. These bhAgavathas always talk about AchAryan and other devotees. Their actions are kainkaryams towards their AchAryan and other devotees. Hence, their words and action always have AchAryan and devotees as their target. This is entirely contradictory to the views of mundane people,

If a layman looks at this story and observes the nature of vaduga nambi, it will definitely seem contrasting to the regular worldly activities. Hence a layman would say something derogatory on such person’s and their activities. This may not just stop with layman. This may be even true for people who are devotees of perumAL. Even those people might say comment bad/negative on people like vaduga nambi and the like. They might say, “Look at these people and their obedience to perumAL. They have abandoned HIM completely and are going behind AchAryan and other humans (bhAgavathas). It is only perumAL who would eventually grace anyone and if so why do these people go beyond other people”. So the question arises as to what happens if this appears to be the complaint on persons who are devotees of devotees. This pAsuram answers these questions and complaints posed by worldly people and perumAL devotees. In addition to answering it, svAmi aruLALa perumAL emperumAnAr describes the speeches, activities and the perceptions of such great souls as something that is contrastingly different from worldly people. This by itself is one of the glories. 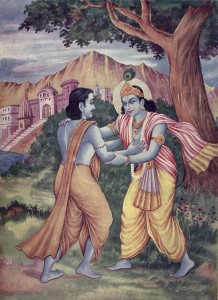 alli malar pAvaikku anbar adikku anbar: bhagavAn sriman nArAyaNan is always loving towards HIS consort periya pirAtti who came out of a lotus flower. There is a reason why perumAL is being referenced with HIS consort. In order for us to understand perumAL Himself, we need to have her blessings in the first place. Her blessings and grace marks the identification that we can know HIM. It also shows that HE expresses an insatiable love towards HIS consort. Thus, those who are at the lotus feet of perumAL, who is always loves HIS consort, are called as “alli malar pAvaiku anbar adikku anbar”. The very love that these devotees exhibit towards HIS lotus feet identifies these people

nalla padiyAm manu nUrkavar saridhai pArvai: The history of such devotees are nothing but their activities. The daily routine and obedience that needs to be adhered by people is documented in manu shAsthram. The activities of such aforementioned devotees serve as standing examples of manu shAsthram. These shAsthrams have documented the dos and donts based on the caste in which a person is born. Those who had learnt it and know those shAshtrams would abide by it. However, it is not easy for laymen to learn and understand the obedience that is being mentioned in such shAshtrAs. However, these same laymen can follow the daily rituals and activities of the devoteers of perumALs and can follow them just like that. The conduct of such devotees are leading examples of others to follow. In fact, it can also be said that the shAshtrAs themselves knew only based on how such great devotees behave. Hence, it can be seen that the conduct of these devotees are original and the shAsthAs themselves are a duplicate image of such devotee’s conduct. Such is the confidence placed on the conduct of these devotees. Going back to srirAmAyaNam again,

sediyAr vinai thogaikkuth thI: The vision of such great devotees will be such that it destroys the sinful karmas that one might have accumulated and gets clogged. Since, their vision destroy these sinful, clogged karmas within a person, it automatically paves way for realization of the soul from within.

Overall gist: The words and speeches of devotees of perumAL, who always loves HIS consort periya pirAtti, though it may sound funny, will always be deemed equivalent to vEdhAs. Their activities stand as the base footprint from which shAsthras like manu shAshtrAs that prescribe the dos and donts to human civilization, have evolved. That is, their activities stand as original and the shAsthras stand as duplicate to the original. The vision of these very same devotees, act as fire and destroy the clogged, muddy and sinful karmAs of a person and subsequently pave way for self-realization.