In this pAsuram, svAmi aruLALa perumAL emberumAnAr describes a point in shAsthram that decrees us to have any kind of relationship with certain type of people. These people are those that do not regard that the wealth they have accumulated for this life, their future lives, is none other than their guru (AchAryan) who told the eight syllabled ashtAkshara mahA manthram (thirumanthram). 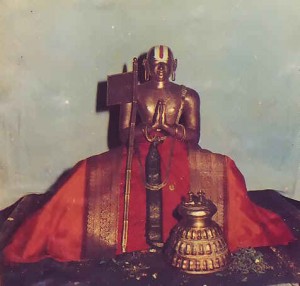 maRai munivar thEdum: that which the sages seek which is nothing but

uyar vIdum: the one and the only paramapadham and finally

sen neRiyum: the divine path (archirAdhi) that leads to such a wonderful paramapadham, These aforementioned things are nothing but

thandhavanE:  one’s guru (AchAryan) who revealed the meanings of the

enRu irAdhAr: People who do not regard that the aforementioned things are nothing but their guru

uRavai: our relationship with them in any form should be

vitidugai: renounced without any trace.

vidhi: This is an order from the shAsthrAs

kandEr: Please look at this order and understand its significance.

mAdum: “mAdu” refers to cows. Here svAmi aruLALa perumAL emberumAnAr describes the cows as those that gives copious amounts of delicious milk, curd and other nutritional items. Since it gives such worthy products the cows are treasured and so considered as a wealth by itself. Having lots of cows would be directly related to wealth.

Manayum: A house that acts as a base / source for all happiness in one’s life.

kiLayum: This includes the relatives that think on the lines that to be united together itself is blissful and blessed. The three things including cows, houses and relatives that are all needed for the sustenance and happiness of the present life.

maRai munivar: Sages that are authority in vEdam. They are those who think about bhagavAn sriman nArAyaNan incessantly in their minds and hearts

thEdum uyar vIdum: “thEdu” refers to the act of finding and so “thEdum uyar vIdu” would mean the paramapadham that has been searched and researched and found as the ultimate place one can be. Since “uyar” would mean “high”, “uyar vIdu” would suggest that there is another thing as “low”. This is nothing but the “kaivalyam” which is nothing but enjoying one’s own soul forever and refusing to be for the enjoyment of paramAthama. Our pUrvAchAryars would regards this “kaivalyam” as very inferior. Since it is something that needs to be discarded, in order to contrast paramapadham with the kaivalyam, svAmi aruLALa perumAL emberumAnAr uses the adjective “uyar” (high) before “vIdu” and refers to paramapadham (vaigundha vAn bhOgam). Since “siru vIdu” means kaivalyam, in order to clear any room for uncertainities, the adjective “uyar” is added before “vIdu”.

sen neRiyum: When a soul reaches the great paramapadham, it is said to have been liberated or attained moksham. The way or the path to reach paramapadham is “archirAdhi”. The way is also equally great as the destination. In other words, “sen neRi” could also include all the other means to reach sriman nArAyaNan HIMSELF. In case of a prapannan (one who had done sharanAgathi), the means is nothing but sriman nArAyaNan HIMSELF.

pIdudaya ettezhuthum thandhavanE enRu irAdhAr uRavai: “uRavu” is a relationship. Here svAmi aruLALa perumAL emberumAnAr talks about the relationship with certain type of people. These people do not realize that their guru, who told the ashtAkshara mahA manthram, is everything for them. Cows, houses and relatives actually exacerbate the worldly pain suffered a person at the context of giving pleasures. The panacea for all those pain is nothing but the eight syllabled ashtAkshara mahA manthram known as “thirumanthram” which would teach us that all those aforementioned material benefits are temporal and ethereal. Thirumanthram would also pave way to reach the highest and the ultimate abode of sriman nArayaNan. Such a  thirumanthram was taught by one’s guru. So if a person has relationship with other people who does not realize that everything is guru who preached them the thirumathram, then such a relationship should be renounced immediately as per the order of shAsthras.

vitidugai: That which needs to be renounced without a trace of doubt / question.

Vidhi: This is an order of shAsthras

kandEr: Let you be known!!! Let you see this fact!!! Let you get this and understand it!!! Hence one should not have any relationship with people who does not have Acharya samabndham. They should at once leave any kind of bondage with these people.