This pAsuram explains that there is a group of people with certain characteristics and these people would be liberated from the bondages of this samsAric world The characteristics of these people are that they have undisputed belief in the eight lettered thirumanthiram, have complete faith in the grace of the guru who told them and has belief in the object that thirumanthiram describes namely “perumAL sriman nArAyaNan” 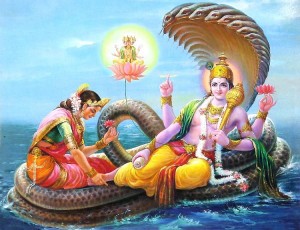 Indha guruvum: the guru who gave the thirumathiram to a person and

am mandhirathAl: the object / cynosure of thirumanthiram

thirumAlum: who is none other than sriman nArAyaNan

enRum: People who think about these three, will forever

aruL purivar: be the target of the grace;

avar: and only such persons

Mandhiramum: manthiram is something that protects the person who tells it not only regularly but also with same undwindled interest towards it. Here “mathiram” refers to the eight syllabled “thirumanthiram”. Thirumazhisai pirAn says “ettezhuthum OdhuvArgal vallAr vAnam aLavE”.

Indha guruvum: The Acharyan who gave and taught the thirumanthiram.

nadhalilAdhu: “nandhudhal” refers to a stop/ break due to anything. Hence “nandhalilAdhu” would mean “incessantly”.

enRum aruL purivar yAvar: The person who is the recipient of the grace of those aforementioned three namely “thirumanthiram”, the acharyan who taught it and the object of thirumanthiram that is none other than sriman nArAyaNan