In this last pAsuram, it is saying about him getting emperumAn, and that he says that those who learn this dhivya prabandham are able to remove fully, on their own, all the sorrows that are created in this material world. 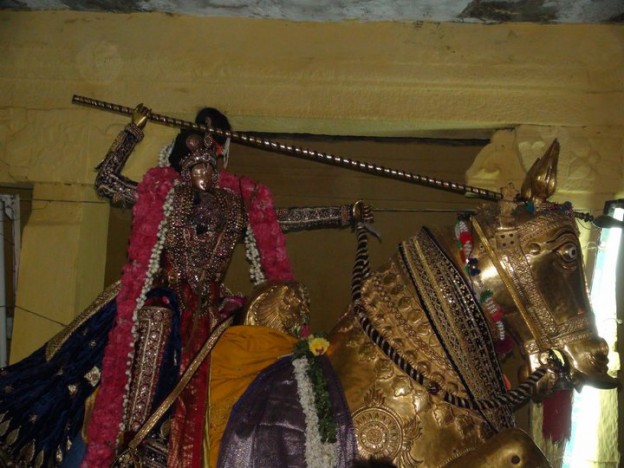 aru maRaiyai – the vEdhas that are difficult to obtain,

annam Ay – incarnating in the form of bird hamsam (swan),

mannu mA maNi mAda mangai vEndhan – who is the head of thirumangai that has got strong and best buildings,

mAnam vEl – and who is having the army that is spear,

parakAlan – and who is like yaman for other philosophies,

minnumA mazhai thavazhum mEga vaNNA – Oh One having form like a cloud that is cool and crawling and is with lightning!

aruLAy – You should show your mercy (on me)!

enRu sonna – praying so and divined

mAlai – in the form of garland of words;

vallAr thAm – those who can recite it,

ariya vallAr – they would be able to remove

mudhal – completely along with any scent of it.

minnu mA mazhai etc. – Oh One having the form like a rainy cloud that pours beautifully with lightning, thunder, and throwing rainbow! It talks about how like a cloud pouring rain on a dry paddy field, upon hearing the pleading call of AzhvAr as “adi nAyEn ninaindhittEnE”, emperumAn, looking with comforting eyes, came to him and showed Himself, to remove AzhvAr’s sorrows.

In previous pAsuram, the words like “mAlai adi nAyEn ninaindhittEnE” implied that emperumAn was not present then, and now as he addresses Him, “mEgavaNNA!”, it could imply that emperumAn has come and showed Himself. It is how the anger of love did not help (pAsuram 28), but his appealing with mentioning his blemishes (pAsuram 29), has helped.

viNNavar tham perumAnE – It is talking about nithyasUris who live based on the food that is His divine form, fed by emperumAn. Oh! You who are giving Yourself for ayarvarum amarar (nithyasUris) to enjoy! Is it a greatness for You to give Yourself to them, since it is like a rain pouring on the ocean; please show mercy for me also to get rid of association with the body and see you at all times (in paramapadham), like how nithyasUris always see your presence.

aruLAy – Even though AzhvAr is at the stage of paramabhakthi thus creating highest form of longing for Him, he is not considering that devotion as the means to attain Him like how upAsakas do; he thinks that it is emperumAn’s mercy that is the means for attaining him. So he is saying aruLAy. He is saying, that for getting rid of interest in worldly matters also, His mercy is the means – as he said “AzhiyAn aruLE [periya thirumozhi – 1.1.4]“, and for getting the experience of emperumAn also, His mercy is the means.

annamAy etc. – AzhvAr is giving an example for explaining how emperumAn came and gave Himself to AzhvAr. Like how He brought out pramANam (vEdhas) to brahmA, He brought out Himself, the pramEya-BhUtha:, that is, One who is known from that pramANam.

munivarOdu amarar Eththa – Along with rishis, brahmA and others came to emperumAn and praised, while saying, “Oh! We have lost the eyes that are the vEdhas”. rishis need pramANam for their AthmA to attain wellness. For brahmA et al too there is need for pramANam, for the activities of creation etc.

annamAy – incarnating in the form of swan so that there is no doubt that vEdham is apaurushEyam (not authored by anyone). (If He had directly said the vEdhas to them, then a doubt might arise against apaurushEyathvam. Hence He came in this form and told them the vEdhas).

veLippaduththa – Creation and destruction of vEdham is about it being brought out and not brought out.

ammAn thannai – about sarvESvaran; He brought out vEdham to them because He is their owner – is the meaning here.

mannu mA maNimAda mangai vEndhan – As he sustained himself, the place also became strong, is the thought. thirumangai became a place having buildings with best gems, and which would not be destroyed till end of time of kalpam (a day of brahmA).

mangai vEndhan – He who fell at birds’ feet, became the ruler of thirumangai.

mAnavEl parakAlan – He became able to hold the spear. Also was able to do kainkaryam (of destroying the enemies of emperumAn and devotees). He holds spear due to compassion towards Him.

parakAlan – Using sword in hand, and by explaining the meanings of vEdhas using dhivya prabandhams, he won the opposers, and established the limits instructed by vEdham.

kaliyan – Having strength to do these both (sword/dhivya prabandham). kali – midukku – ~strength. Another meaning is – He who destroyed the problems of kali yugam. He calls himself too as ‘kali-kanRi’.

mAlai – For empermAn to wear it in His head. This dhivya prabandham being so.

thollai etc. – avidhyai that is ignorance, karmas that are good and bad ones, and vAsanai that arises out of habit of these karmas, ruchi that is interest in these matters, and association with body which is the cause of the above, – all of these are there in us from eternal past, following us in the form of cause and effect for each other; He says that those who learn this dhivya prabandham would be able to remove association with them on their own.

vinai – effects on self for two deeds in the form of good and bad. These two also show the happiness and anger of emperumAn for the respective deeds. These are in the form of those deeds done in previous births, and the ones done in current birth. The ones done in previous births is called pUrvAGam. Ones that are going to be done are called “uththarAGam”. Out of pUrvAGam whatever part has started yielding its effects is called “prArabDha karmam”.

karma also includes relationship with insentient (body, etc.) that are in the forms of sthUla Sareeram (gross body), and sUkshma Sareeram (subtle body).

karma also includes, vAsanai which is the smell left out of habits that involved these relationships with insentient, and includes the interest/taste of involvement in these insentient matters.

All these are hurdles for a jeevAthma to reach paramAthmA.

thollaip pazhavinai – These karmas are being very old, and not being possible to determine the starting point of its accumulation. These are really very old, is the meaning.

thAmE – They would be able to remove completely these hurdles all on their own; they will not even require emperumAn’s help (eeSvaranudaiya muzhangaith thaNNeerum vENdA). (This is considering the importance of Him showing grace to us out of happiness for learning this dhivyaprabandham). That is, for those who learned this dhivyaprabandham, emperumAn’s grace would automatically reach them.

aruLAy enRu – munivarOdu amarar Eththa – Originally the phrase “minnu mA mazhai thavazhum mEga vaNNA viNNavar tham perumALE aruLAy” is taken as said by thirumangai AzhvAr to perumAL. Instead, if it is taken as part of the phrase munivar and amarar praising emperumAn, then it is shown that the original meaning is more apt and better.

thirumangai AzhvAr does not have the strength to say openly about his greatness, as “en avAvarach chUzhndhAyE [thiruvAimozhi – 10.10.10]” like nammAzhvAr, That is why, he divines such that the phrases have to be aligned differently. Also, unlike previous pAsurams, AzhvAr is not expressing his longing. He is saying that emperumAn’s divine body is like rainy clouds. He is saying that emperumAn gave Himself to the enjoyment of nithyasUris. He says that emperumAn would give him strength to hold the spear. He says he can destroy the enemies. All these talks would be suitable for this AzhvAr’s talks only and will not match even the words of nithyasUris and munis. So, in this pAsuram, it is clear that AzhvAr got emperumAn as he wished and got satisfaction in his mind.

Translator’s note – This completes the translation of this dhivya SAsthram. It had been an immersive experience to learn the divine words of AzhvArs and Acharyas, puththUr swami’s vivaraNam, and upanyAsams of learned swamis, in trying to translate this with proper meanings as much as possible. If there are any corrections needed, kindly feel free to send them.

adiyEn realized that this vyAkyAnam grew sweeter and more beautiful as it progressed from pAsuram to pAsuram. This is an experience that everyone could get by the grace of thAyar and emperumAn, and AchAryas.