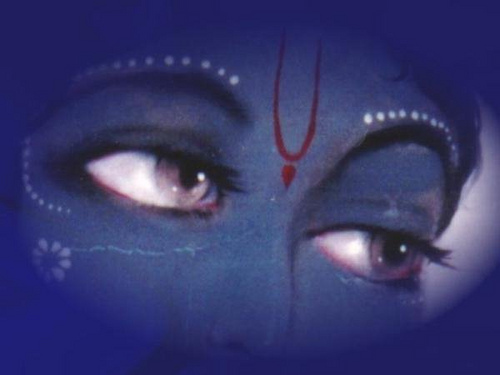 kai vaNNam thAmarai – At first she talks about His hand that held her too fondly during the wedding.

kaNNiNaiyum aravindham – After having started saying sweet words, if He sees her form, then He would flounder, and then He would talk the rest of the words with His eyes only. Sweet words show His affection. He stood with all the affection to be visible in His eyes, she says

adiyum ahdhE – She is talking about the divine feet she falls to after losing to those affectionate eyes. Instead of mentioning the comparison to lotus flower just once in this pAsuram like she did in “kaNNum vAyum kaiththalamum adiyiNaiyum kamala vaNNam [thirunedunthANdakam – 18]”, here, due to excess of sweetness, she is saying the words of comparison to lotus flower for each part of Him that she mentions here. Unlike in the previous three places in this pAsuram where she mentions the flower explicitly, for divine feet she just says ‘ahdhE’ (is also like that (flower))’, to convey that the flower is not having that much esteem. It implies that for the other parts mentioned earlier too, that is, hand, mouth and eyes, the flower is not a proper comparison.

Oh! The way you are describing, it is like I saw Him directly, instead of just hearing about His coming here, says her friend. She replies, “My description is not enough; I can only say avvaNNaththavar (He, of these characteristics), and cannot describe fully by words”. A hungry person just smelling the food, is the level in which I can describe; it is not possible to fully describe about how He came here, and about Him. I told you using a comparison because you asked; His form was not such that one comparison could be used to fully describe it. It is only possible to say, “He is of such greatness” – this is all that can be described.

nilaimai kaNdum – As said in “na thyajEyam [SrI rAmAyaNam – yudhDha KANdam – 18-3]” (will not reject one who comes as a friend), even after seeing His state of sustaining Himself only if He gets me, and losing His life if He does not get me;

avar nilaimai – His beauty of form was such. His simplicity was such. Staunchness in protecting His devotees was such. Even after seeing all of these.

kaNdum – Earlier I had only heard about this from your mouth. Even after seeing it according to how I had heard;

kaNdum – emperumAn who could be seen only after doing penance for a long time, was in front of my eyes without any effort – that is the One I let go thinking about His supremacy.

thOzhee – Oh you did not get to see how His form of beauty was, the way He came here, and the state of His standing here.

avarai – He who could not go to anyone/anywhere else except me here.

nAm – I would be “asannEva sa Bhavathi [thaithriyOpanaishath – Anandhavalli – 6]” (He becomes like a non-existent itself), like a non-existent entity when not with Him; Or, I who does not have anywhere else to surrender to than Him. Since it is said as “Eka athiriktham anEkam” (more than one is anEkam), nAm here could be considered as a plural form to mean it includes her friend also.

dhEvarenRu – Not understanding His form as is, but in some other way, I got bewildered thinking that He is the supreme lord, but I forgot that He thought of Himself as “AthmAnam mAnusham manyE [SrI rAmAyaNam – yudhDha KANdam – 120-11]” (I consider myself as a human being). Mistaking the same class as a different class, is what I did. Forgetting His own thought “AthmAnam mAnusham manyE”, I clang to the word of passer-by who said “bhavAn-nArAyaNO dhEva: [SrI rAmAyaNam – yudhDha KANdam – 117-13]” (brahmA said praising SrI rAmar – you are the supreme nArAyaNan).

anjinOmE – I backed out. He who is the abode of protection, is about the one I got scared.

nAm anjinOm – By the plural word of “nAm”, she is in the state of mind of seethAp pirAtti who as a noble princess would use such plural in the place of singular- nanjeeyar would divine so. Even during separation from Him, her scent of nobility would not leave her.

thOzhee! – It is due to not having your presence that I lost Him due to fear. If you who understand my ways and His ways had been present at that time, (you) would have removed my fear, dear friend – implies parakAla nAyaki.

There is a bigger and exclusive vyAKhyAnam for this pAsuram by SrI parASara Bhattar. We hope to cover that in the future.