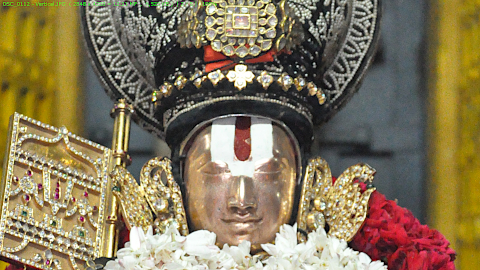 Eleventh pAsuram. amudhanAr says that he cannot speak enough about the greatness of activities of those who have taken refuge under rAmAnuja who has donned the divine feet of thiruppANAzhwAr on his head.

thiruppANAzhwAr mercifully gave us the beautiful garland of thamizh which has the greatness of the distinguished meanings of four vEdhas, since it explains matters related to emperumAn. emperumAnAr has decorated his divine head with that thiruppANAzhwAr’s divine feet which are like lotus flowers. I cannot talk enough about the activities of those on this world, who have taken such rAmAnuja as their refuge.

Twelfth pAsuram. amudhanAr queries whether he will have affection towards anyone other than those who worship rAmAnuja who is the  dwelling place for the divine feet of thirumazhisai AzhwAr.

Fourteenth pAsuram. amudhanAr says that he got rid of the nature to attain eminent benefits through other means since he has not separated from rAmAnuja who praises those who recite the pAsurams of kulaSEkara AzhwAr.

rAmAnuja, who is eminent and praises the divine feet of those who affectionately recite the verses of kulaSEkarap perumAL, which are embellished with words from SAsthras (traditional texts) like gemstones, does not separate from me. Hence, I got rid of the nature of carrying out hurtful penance, out of haste, in places such as hot forest, mountain, ocean etc in order to attain the desired benefits.

Fifteenth pAsuram. amudhanAr says that he will not join with those who do not engage with the qualities of emperumAnAr who has kept his mind at the divine feet of periyAzhwAr. He says that there can be no lowliness hereafter, for him.

emperumAn has the greatness of protecting everyone, being present forever and being caught in the swirl of flowing, unwavering devotion. periyAzhwAr had the nature of carrying out managaLASAsanam (wishing him to live long) for that emperumAn, just like he would do for ordinary people, without any analysis. emperumAnAr has the divine mind of not separating from the divine feet of such periyAzhwAr. I will not join with those do not consider the boundless qualities of such emperumAnAr, as their refuge. After this thought has come into me, what deficiency is there for me? [there is none]

Sixteenth pAsuram. amudhanAr mercifully writes about the great benefit carried out for this world by emperumAnAr who was the recipient of the grace of ANdAL who was dear to him.

ANdAL initially donned garland on her divine tresses and then gave that garland to be decorated on the divine crown of periya perumAL.  emperumAnAr got uplifted to be a hugely magnanimous leader of all sages, due to the natural grace of ANdAL. Behold, emperumAnAr uplifted the vEdhas without anyone asking him to, when vEdhas, which had no deficiencies, were abused by other philosophers during the time of kali (one of the four yugas or epochs) when the entire earth was in utter darkness.

Seventeenth pAsuram. Those who attain our lord, emperumAnAr, who is devoted to thirumangai AzhwAr, will not get bewildered even if they face hurdles.

emperumAn, who is praised by all SAsthras, who stands proudly at thirukkaNNamangai, like an independent elephant, has been praised by thirumangai AzhwAr. Our lord, rAmAnuja is very affectionate towards thirumangai AzhwAr. Those who come and attain such rAmAnuja will not feel sorrowful even when confronted by hurdles. They will not feel overjoyed if happy events come their way.

Eighteenth pAsuram. madhurakavi AzhwAr has nammAzhwAr in his divine heart. amudhanAr says that emperumAnAr, who mercifully explains the qualities of madhurakavi AzhwAr so that all the AthmAs (chEthanas, sentient entities) would get uplifted, is his companion.

nammAzhwAr incarnated in this world in order to mercifully speak about meanings of vEdhas which are very difficult to understand, through thousand pAsurams [thiruvAimozhi] such that even children and women could learn them. He was also called as SatakOpan and was a foe for those who do not believe in vEdhas or those who interpret the vEdhas incorrectly.  SrI madhurakavi AzhwAr had the apt greatness to keep nammAzhwAr in his divine mind. amudhanAr says that emperumAnAr, who helped all the AthmAs to get uplifted by favouring them to understand the qualities of madhuravakavi AzhwAr such as knowledge etc, is his companion.

Nineteenth pAsuram: amudhanAr says that emperumAnAr, who mercifully said that nammAzhwAr is everything for him, is very sweet for him.

sarvESvaran (emperumAn) is the greatest among all the end goals, unlimited wealth, father, mother, AchArya (teacher) and the consort of periya pirAtti who was born in fragrant flower. As soon as emperumAn manifested all these to nammAzhwAr through his mercy, AzhwAr composed thiruvAimozhi, which is celebrated as the dhrAvida vEdham (thamizh vEdham). emperumAnAr who explained thiruvAimozhi such that all the people in the world understood the meanings, is sweet nectar for me.

nammAzhwAr, the lord of beautiful thirunagari (kurugUr) which is surrounded by sandalwood grove, composed thiruvAimozhi through his divine lips with great pathos. nAthamunigaL had the quality of making those who are involved in knowing the verses with music, to exist richly [with deep devotion]. emperumAnAr, who enjoyed that nAthamunigaL in his divine heart with great desire, is my great wealth.