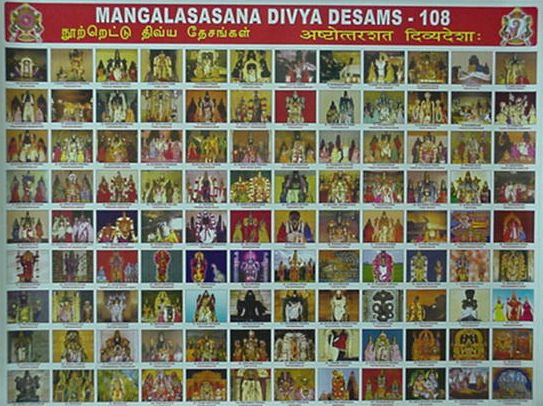 Taking the form of archA vigrahas, bhagavAn manifests himself before every human including us (who are born much later to his incarnations, and thus lost the chance to see/know him then). Not just that, he shall be seen in this form even by the forthcoming generations of people for a long time to come.

Thus, he is called ‘sarvathaSchakshu:’ – the one who is seen by everyone.

This clearly proves his ability to clear all doubts regarding himself, as seen in the divine name ‘chinnasamSaya:’.

After all, there cannot be even an iota of doubt when he is seen so manifest in so many places thus.

Etymology: bhagavAn shows himself to the eyes of every individual (who are born much later to his incarnations). Thus, he is called ‘sarvathaSchakshu:’. This nine lettered manthra bestows the power of vision upon the chanters.

In his archA form, bhagavAn completely depends upon his devotees in order to get a ritual bath, dressing, bhOgam (food), and an assemblage for singing his glories, and all other services. Thus, he limits his own ‘lordship’ and acts completely dependent. Hence, he is called ‘anISa:’ – the one who is not the master!

Etymology: bhagavAn is called ‘anISa:’ amongst his devotees, for he completely depends on them for every service (in his archA form).

Unlike his incarnations, where bhagavAn manifests only for a certain period and disappears, he is ever manifest in various forms of ‘archA vigraha’s (such as rAma, krishna, varAha, hayagrIva, SrInivasa, kESava, et al) in order to show himself to the countless people who are born at a later period as well. Thus, he is called ‘SASvathasthira:’ in his archA form – meaning, the one who stays forever.

That is why the sAththvatha samhitha hails thus: “bhagavAn resides in the various idols chosen by his devotees, by taking verily those forms”.

Etymology: bhagavAn, who resides in various idols (desired by his devotees) by taking the respective forms, is called ‘SASvathasthira:’.

Obliging to his devotees who seek his presence in the form of archA vigrahas, bhagavAn lies down in those lands that are identified by his dear devotees – being consecrated at such places by people of various ranks such as sidhdhas, manushyas, et al. He lies down in such places with the sole intention of gracing his devotees. Thus, he is called ‘bhUSaya:’ – the one who sleeps on the land.

Etymology: With various forms such as self-manifested, et al (others being – consecrated by rishis, dhEvas, sidhdhas, et al), since bhagavAn sleeps on this land, he is called ‘bhUSaya:’.

In this way, bhagavAn – the consort of SrIdhEvi – decorates himself with the most beautiful ornament of ‘benevolence’. Thus, he is called ‘bhUshaNa:’ – the bedecked one.

As per grammatical rules, the root ‘bhUsha’ (भूष) gets the ‘yuch’ (युच्) adjunct, resulting in this divine name.

After all, when a very wealthy man goes to the house of a poor person as a guest and accepts that poor man’s hospitality, then it is not a shortcoming for the wealthy man. Rather, it becomes his virtue. Similarly, when bhagavAn comes down to our houses and temples as archA vigrahas and accepts our services, it only adds to his glories.

Etymology: That consort of SrIdhEvi, who bedecks himself with the superior quality of benevolence, is called ‘bhUshaNa:’.

Furthermore, bhagavAn – in his archA vigraha – is the greatest wealth unto those devotees who are knowledgeable about all the explicit means of attaining him. For all such devotees, bhagavAn is verily a treasure – as precious as children, cattle, friends and relatives, and the like. Thus, he is called ‘bhUthi:’ – the wealth.

Etymology: He – who is the greatest wealth unto his devotees (in his archA form) – is called ‘bhUthi:’.

bhagavAn is thus free of all sorrows of being separated from his dear devotees. There is none who can be called as a ‘stray’ person, for bhagavAn is the lord of every being. He only protects every soul, and thus he is free from all sorrows therein. Thus, he is called ‘aSOka:’ or ‘viSOka:’.

(NOTE: Some versions of the sahasranAmam text have this divine name as ‘viSOka:’, and some others as ‘aSOka:’. bhattar indicates that both of these are acceptable names in our sampradhAyam, and mean the same)

Etymology: Since bhagavAn is the master of all entities (and hence protects them at all times and thereby frees himself from all sorrows), he is called by the divine name ‘aSOka:’.

Even amongst his devotees, bhagavAn destroys the sorrow of separation by being always united with them in the form of archA vigrahas. Thus, he is called ‘SOkanASana:’ – the one who destroys sorrows.

The scriptures have hailed thus:

“I have heard that bhagavAn will definitely destroy all our sorrows. Oh bhagavAn! I am now in one such distress. Please come and help me overcome it”

This is how the distressed people call out for bhagavAn – who is their greatest relative – when they cannot stand his separation.

Etymology: bhagavAn is called ‘SOkanASana:’, because he destroys the sorrow of separation from himself amongst his dear devotees.

With his archA forms, bhagavAn further influences his dear devotees to a large extent. He is the one who possesses the divine effulgence that is capable of opening the eyes of his dear devotees – both internal and external (knowledge as well as senses). Hence, he is called ‘archishmAn’ – the effulgent one.

Etymology: He who possesses divine effulgence at all times – which is capable of opening both the internal as well as external eyes of his devotees – is called ‘archishmAn’.

The word ‘archA’ (अर्चा) refers to the archAvathAra (अर्चावतारः) or the idols of worship. Since bhagavAn takes such forms, he is called ‘architha:’. In the true sense, such archA vigrahas only may be termed as ‘avathAra’ (descent), since they are very easily accessible to each one of us – unlike the ‘para’ form which can be seen only in SrIvaikuNtam. Even his incarnations in the form of dhEva, manushya et al at various times and at various places wouldn’t serve the real purpose of ‘descent’ – as much as the archA forms do.

On the contrary, bhagavAn – in his archA forms – resides at all places, temples and houses, at all times and very much manifest even to our mortal eyes. Thus, the archA forms of bhagavAn truly serve the purpose of his ‘descent’ in this world.

The deep hidden purports of such descent of bhagavAn in the form of archA may be learnt from various scriptures such as bOdhAyana smrithi, vishNu purANa, etc.

For instance, it is said in the vaishNava dharma thus:

“One must make beautiful idols with pleasant looks of bhagavAn vishNu, with various materials such as gold, silver etc (includes various metals, mud, wood, etc as ordained in the scriptures).  Such idols must be very pleasing to the eyes of such devotees. Then, they must worship bhagavAn in that form; prostrate before that form; serve bhagavAn in that form in various ways (offering various upachAras); and meditate upon those forms of bhagavAn. Doing thus, all the blemishes / sins of such worshipper are ridden off, and they finally attain that supreme brahman”, etc.

Etymology: The word ‘archA’ refers to the divine forms of bhagavAn as idols of worship. Since bhagavAn manifests at various places such as in temples, homes, etc (in order to accept the worship of his devotees at those respective places), he is called ‘architha:’. This seven syllable manthra confers all desires of the chanter.