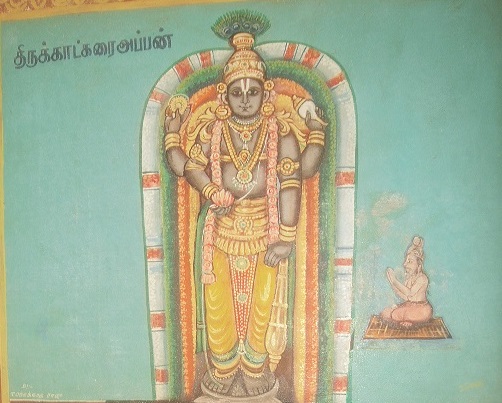 In the third pAsuram, AzhwAr says “I cannot think about the ways emperumAn mischievously made me loyal to him and saying ‘I will accept your service’, entering me and fully taking me with his qualities and disorderly activities”.

(with his activities revealing simplicity, easy approachability etc)
ennai Irmai seydhu – melting me
en uyir Ay – (with these two aspects) being the one who sustains me
en uyir uNdAn – being the one who consumes me
sIr malgu – having abundance of honey and flowers
sOlai – having garden
then – beautiful
kAtkarai – due to the presence in thirukkAtkarai
en appan – being my benefactor
kAr mugil vaNNan than – the monsoon-cloud like greatly generous emperumAn‘s
kaLvam – his mischievous act where the means and end are different
aRigilEn – I don’t understand it to be in a particular manner.

emperumAn owned me and entered my heart by revealing the quality of svasvAmi sambandham; he melts me, he is the one who sustains me and consumes me; he is my benefactor due to being present in thirukkAtkarai which is having beautiful garden with abundance of honey and flowers; I don’t understand the monsoon-cloud like greatly generous emperumAn’s mischievous act where the means and end are different, to be in a particular manner.

When asked “What was that?” AzhwAr says,