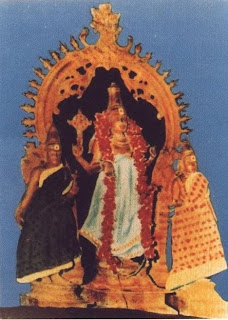 In the seventh pAsuram, AzhwAr says “I am unable to help him there [in his incarnations] and becoming anguished due to that; further there is no one like me who travels along with emperumAn, to inform the presence  of me, the servitor, in the presence of periya pirAttiyAr, my female lord (swAmini) in thirupparisAram (thiruvaNparisAram) and help me attain emperumAn”.

varuvAr – those who come (from there)
selvAr – those who go (from here)
vaN – having distinguished wealth
parisAraththu – in thirupparisAram
en – to accept my service
irundha – mercifully present
thiruvAzhmArvaRku – for SrImAn (the lord of SrI mahAlakshmi)
uru – by physical beauty
Ar – matching
chakkaram – thiruvAzhi (divine chakra)
sangum – thiruchchangu (divine conch)
sumandhu – carrying
ingu – in this material realm
ummOdu – with you
orupAdu – remaining in close proximity to you
uzhalvAn – travel along
Or – (unparalleled) one
adiyAnum – servitor
uLan – is available
enRu – as
en – my
thiRam – matters
sollAr – not informing.

Since those who come do not bring him and those who go do not hear any response, AzhwAr thinks that they come and go for his own sake and hence says that they are not informing.

(when they don’t inform, for his acceptance)
seyvadhu – can be done
en – (becoming upset) how?

To accept my service, SrImAn (the lord of SrI mahAlakshmi) is mercifully present in thirupparisAram which has distinguished wealth; though many devotees come and go, there is no one present to inform my matters to such emperumAn that there is a servitor (me) who is available to carry your divine chakra and divine conch which match your physical beauty and travel along with you in this material realm, remaining in close proximity to you. Since those who come do not bring him and those who go do not hear any response, AzhwAr thinks that they come and go for their own sake and hence says that they are not informing. AzhwAr is becoming upset thinking “what can be done?”

When asked “If they are going for their own sake, what would they say there?” AzhwAr says