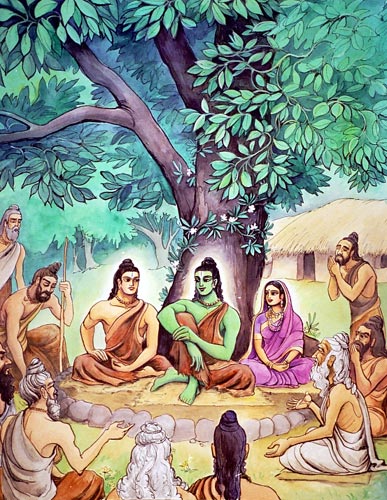 In the previous pAsuram, did not AzhwAr say “think of the divine feet of emperumAn who is decorated with SrI mahAlakshmi on his chest?”. He takes that instruction for himself and tells his divine mind not to forget emperumAn, who has a beautiful form which removes all the ennui and confers happiness, in the first place.

amarulagam – the world of dhEvas [heaven]
poruLAl – with wealth
pukku iyal AgAdhu – is not proper to enter
aruLAl – with mercy
aRam – through the fruits of puNya (good deeds)
aruLum anRE – will grant with his mercy
aruLAlE – through his mercy
mA maRaiyuOrkku – for the parama vaidhikas (those who stand by vEdhas, the sacred texts)
Indha – one who offered himself
maNivaNNan pAdhamE – the divine feet of emperumAn who has blue complexion
nenjE – Oh my heart!
nI maRavEl – do not forget
ninai – keep meditating

poruLAl amar ulagam pukkiyal AgAdhu – there are two interpretations: (1) with wealth as purushArtham (end goal), not entering  the apt place for one’s svarUpam (basic nature), mOkshalOkam (SrIvaikuNtam); (2) not considering places such as brahmalOkam etc as a goal and not attaining them. Just as SrI guNarathna kOSam 21 says “surapuri yadhgachchathO dhurgathi:” (you made those who wanted to attain you to think of dhEvalOkam too as hell), reaching dhEvalOkam is considered as lowly. Just as brAhmaNas would not go anywhere near places inhabited by those born in lowly clans, one should not even go near svargam (heaven).

aruLAl aRam aruLum anRE – why so? Why is it that it is considered as an inappropriate place? The chEthana (sentient entity) likes only materialistic possessions. If he does not get them, he becomes sorrowful. emperumAn, who has immeasurable mercy, unable to tolerate his sorrow, may give him what he desires, saying “why should the chEthana lose out on wealth? Let him have it”. chEthana has sensory perceptions which are active. Hence when he desires wealth, he may even say “do what is righteous for you”. This is similar to a mother yielding to a child which desires to eat sand. He may even say, just as he had told a brAhmaNa by name gOvindhaswAmy, mentioned in periya thirumozhi 5-8-5 “bOgam nI eydhip pinnum nammidaikkE pOdhuvAy” (stay in the world for some time, enjoy all the worldly pleasures and then reach my SrIvaikuNtam). aRam refers to the benefit obtained through righteousness. If svargam is obtained, it will be inimical to the svarUpam (basic nature) of chEthana. Even for obtaining lowly benefits, one needs the mercy of emperumAn. AzhwAr says, that being the case, why not attain emperumAn himself with the help of that mercy.

aruLAlE mAmaRaiyOrkkIndha maNivaNNan pAdhamE – the divine feet of the one who gives himself through his mercy. He gave mOksham to great sages such as sukar (son of vEdha vyAsar), vAmadhEvar et al who detested the materialistic life and prayed to him to grant his divine feet. Just as it is said “sukhO muktha: vAmadhEvO muktha:” (sukar attained mOksham, vAmadhEvar attained mOksham), he granted them SrIvaikuNtam through his mercy. If the text is taken as mAmaRaiyORku (singular number) it will refer to sage mArkaNdEya who was granted nithyathvam (permanency). If the text is taken as mAmaRaiyOrkku (plural number) it can be taken to refer to the sages in dhandakAraNyam, to whom he gave his beautiful form itself to enjoy. Hasn’t it been mentioned in SrI rAmAyaNam ayOdhyA kANdam 1-13 “rUpasamhananam lakshmIm saukumAryam suvEshathAm dhadhruSu: vismithAkArA: rAmasya vanavAsina:” (the sages, who dwell in forests, looked with amazement at SrI rAma’s beautiful form, gentleness and the aptly fitting guise of sage). rUpasamhananam – natural beauty; lakshmIm – radiance over the beauty; saukumAryam – the gentle form of his divine body, which, even by looking at it, will become red [it is so gentle and soft]; suvEshathAm – such was his guise as a sage that even the dress made of bark and the matted hair looked like ornaments on him; vanavAsina: dhadhruSu: sages who dwell in forests saw him. Who beheld the sight which is normally held by whom? rig ashtakam 1-2-7 says “sadhA paSyanthi sUraya:” (nithyasUris always behold the sight of vishNu). Thus, the sight, normally seen by nithyasUris in SrIvaikuNtam, was seen in the forest by the sages!

maNivaNNan pAdhamE – wasn’t it his beautiful form that he gave the sages! AzhwAr tells his heart to think constantly, without forgetting, of the divine feet of emperumAn who has bluish complexion which will remove the fatigue of those who see him. Oh heart which manifests knowledge, do not forget this matter which has been exclusively created for you! Oh heart, you need not be lectured upon! Do not consider these words as having been uttered in an assembly for the sake of utterance! Forgetting emperumAn is equivalent to keeping desire in worldly matters. AzhwAr tells his heart not to forget, so that his heart will not contemplate on worldly matters.

We shall take up the 42nd pAsuram next.