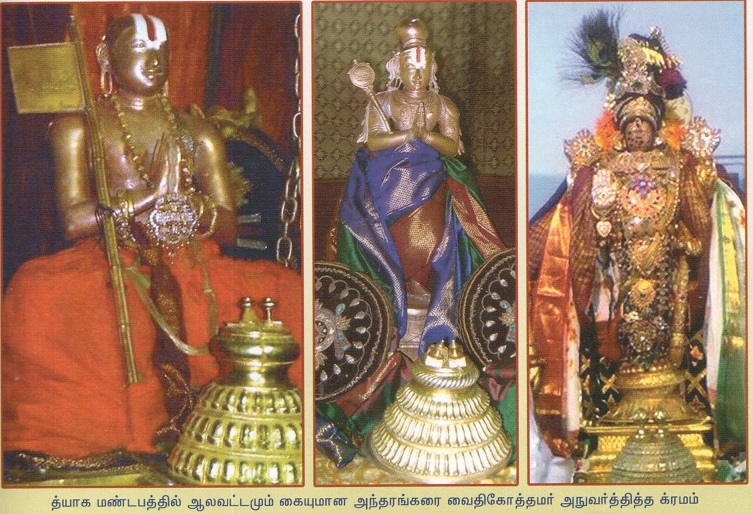 In the previous two pAsurams, AzhwAr said that there is no shortcoming for these people [those who have knowledge about the meanings of mEmporuL pAsuram] either because of their birth or because of their behaviour. In this pAsuram, AzhwAr says that “it is not only that they do not have any shortcoming. They have the greatness that other samsAris, by having a connection with them, will become purified because of that connection itself”.

Let us enjoy the pAsuram and its meanings.

Unam AyinagaL seyyum –  if they carry out lowly activities [or]
Una kArakargaLEm – if they carry out lowly activities through others
vAn uLAr aRiyalAga vAnavA – Oh one who lives in paramapadham (SrIvaikuNtam) and who cannot be known even by the dwellers of upper worlds such as brahmA et al !
enbar Agil – if they say so
thEn ulAm thuLaba mAlai senniyA – Oh one who adorns on his divine crown, the garland of thuLasi, from which honey is dripping !
enbar Agil – if they say so
pOnagam seydha sEdam – the remnants of bhagavath prasAdham (food that had been served to emperumAn) eaten (by them)
tharuvar El – if they give (with compassion)
anRE – immediately
punitham – (that ) will be very purifying

vAnuLAr aRiyalAgA vAnavA – One who lives forever in paramapadham [SrIvaikuNtam], not known even to brahmA and other celestial entities. Those sitting on the loft (which is at a higher elevation than the floor) cannot know about starts because they are at a higher level. In the same way, even if they are living in sathyalOka (brahmA’s dwelling place) and other such places, these celestial entities cannot know about paramapadhanAthan. Even though they have some greatness because of  higher level of gyAna (knowledge) and Sakthi (power), they cannot reach paramapadham with that. The word AgA means “not possible” here. Alternatively, AgA can also mean “should not”. Just as a chaNdALa (person born in a low caste) should not enter a place where rituals are conducted, these celestial entities should not enter paramapadham. But we have seen that gyAnis such as AzhwArs know about paramapadhanAthan. This is not because of their efforts, but because of his [emperumAn’s] mercy. As said in SrI bhagavath gIthA 16.14, those who think that they are “God” cannot see or know about him. Just as people cross oceans with the help of ship, AzhwArs cross the ocean of samsAram with the help of ship called vishNu. But these celestial entities are like people who think that they could cross the ocean with their own efforts. Without any distinction between one who knows swimming and one who does not know, it is not possible for a person to cross the ocean by swimming. In the same way, one cannot know about emperumAn on his own efforts by anyone irrespective of the fact whether he has or does not have the strength [to know]. As per the prapaththi lakshaNa vAkhyam of bharatha muni “ananyasAdhyE svAbhIshtE mahAviSvAsa pUrvakam I thadhE gOpAyathA yAnchA prapaththi: SaraNAgathi: II” (when it is not possible through any other means as per one’s desire, beseeching him to be the means through deep faith is prapaththi. That itself is SaraNAgathi), the AzhwArs qualified as prapannars (those who surrendered) by taking refuge under him. That he is the only upAyam (means) will be clear when one looks at his greatness of being without any connection with samsAram and having aprAkrutha vigraham (his divine physical form is composed of sudhdha sathvam, purely good). When one looks at the lowliness of chEthana (sentient entity) controlled by the three qualities of sathva, rajas and thamas (purely good, passion and ignorance), emperumAn’s upAyathvam (being the means) will be evident. When one dvelves into the chEthana’s athyantha parathanthra svarUpam (having the basic nature of being completely dependent on emperumAn), emperumAn’s upAythvam will be evident.

enbarAgil – just as thaiththirIya samhithai 7.5.3 says “mana: pUrvO vAguththara:” the faculty of  speech says what the faculty of  thought thinks first. In the same way vAnuLAr aRiayalAgA vAnavA comes out of a person who has taken refuge under emperumAn through his mind. Just as ahirbudhya samhithai 37.30 states, it is evident that these people pray that emperumAn should be the upAyam for them. Agil – AzhwAr indicates that it is very difficult for people to renounce their ability to protect themselves. Thus, it has been shown that these people are those who have taken emperumAn as their upAyam.

Next it shows that they have taken emperumAn himself as upEyam (goal or benefit) too.

thEnulAm thuLabamAlaich chenniyA – Oh, the one having divine crown decorated with thuLasi garland, dripping with honey! Since he is adorning with thuLasi garland, considered to be best among  flowers, it is indicated that he is the greatest among dhEvas. Since he is referred to as having thEnulAm thuLaba mAlai, it indicates that he is very sweet and enjoyable. With these two, it is indicated that he is the one to be attained above all.

enbarAgil – just as the word enbarAgil [in the earlier part] indicates the prArthanA (prayer) for emperumAn being the means, this word indicates the prayer for attaining him. Agil – it is very rare to leave aside all the other goals and consider emperumAn as the superior goal. kaNNan (krishNa) himself had indicated this in his SrI gIthA SlOka “sa mahAthmA su dhurlabha:”

UnamAyinagaL seyyum – people who will torture other creatures for feeding their own stomachs. They are such dishonourable people that they would tie animals such as live goats and cows so that they can give the flesh after cutting them to pieces to those who desire to have these, even in the dead of night. Compassionate persons such as sibi chakravarthy will give their flesh for saving other creatures. These people are exact opposite of such compassionate people.

Una kArakargaL – Not only will they carry out such heinous acts themselves and become sinners, they will also engage others in such acts and make them sinners. kArakargaL – engaging others for carrying out tasks. Unam – lowly acts. Since these people would not indulge in such heinous acts after acquiring knowledge about mEmporuL, we should presume that these acts have been carried out earlier.

Elum – even if they would have done such crimes earlier, they would not do such acts after acquiring knowledge. If they see others suffer {after acquiring this knowledge], they will suffer the pangs of the others’ pain and swoon. It is pertinent to remember here that kUraththAzhwAn once heard the wailing of a frog that had been caught by a snake and thought “Oh, how terrible! Who is it calling out for who could hear it and save it in this state?” He became very agitated and swooned. If such people torture others, it will be only for their benefit, as said by this AzhwAr in the 8th pAsuram “thalaiyai AngE aRuppadhE karumam kandAy” (severing the heads of people who abuse emperumAn is the correct action), just as emperumAn poses difficulties to jIvAthmAs [for their ultimate benefit].

pOnagam – food. Since these gyAnis (knowledgeable people) are more supportive than emperumAn, just as one says “amudhu seydhu” (offer divine food) in emperumAn’s case, AzhwAr says pOnagam seydhu in these gyAnis’ case, for want of a better word.

seydha sEdam – the food remnants (after partaken by the gyAni). ALavandhAr, in his sthOthra rathnam 42 says “thvadhIya bhukthOjjithaSEshabhOjinA thvayA nisrushtAthmabharENa yath yathA   I priyENa sEnApathinA nyavEdhi thath thathA’nujAnandhamudhAra vIkshaNai: II” (one who eats the food that remains after you have eaten, one who acts as the administrator of your two vibhUthis (realms) having been appointed by you, one who is sweet (to everyone), such vishvaksEnar’s acts were carried out with divine mercy as per the way you ordained . . .). periyAzhwAr in thiruppallANdu 9 says “kalaththadhuNdu” (eating the remnants after you had eaten). Thus these terms refer to the food that remains on the (banana) leaf [which is used as a plate to eat out of, traditionally] after the food had been partaken.

tharuvarEl – if one gets such a rare offering. This is not like the bhagavath prasAdham (emperumAn’s mercy) that those, who desire other things also, get. Thus, if such a great rare benefit were to be obtained . . . It is pertinent to recall an incident here – One day, parAsara bhattar (kUraththAzwAn’s son) was discoursing on thiruviruththam (One of the works of nammAzhwAr) when he gave the meaning of the word “maippadi mEni” as – no one can know that “it is like this” – such is his thirumEni (divine form) that it will darken [blind] the eyes of the beholder. His disciple, nanjIyar, who was listening to this, told him that the pAsuram by thirumangai AzhwAr in periya thirumozhi 10.10.9 “innAr enRaRiyEn” has similar meaning to this. bhattar was overjoyed on hearing this and gave the remnants of his food (pOnagam seydha sEdam) to nanjIyar as his prasAdham (grace).

punidham anRE – if one takes the remaining portion of the food that these knowledgeable people had, it will sanctify that person who takes it, immediately, just as the kuLigai (magic lump, touchstone) called sparSavEdhi converts iron into gold as soon as it touches it. There is no need to wait for another body, another time, another place, for this effect (to sanctify). vihakOSam (a sacred text) says “nArAyaNaika nishtasya yA yA vruththis thadharchanam I yO yO jalpas sa sa japas thath dhyAnam yannirIkshaNam  II thathpAdhAmbvathulam thIrtham thadhuchchishtam su pAvanam I thadhukthimAthram manthrAgryam thathsprushtamakhilam Suchi II” (whatever activities are performed by a person who is an exclusive devotee of nArAyaNa, they are all bhagavath ArAdhanam (worship of emperumAn); whatever words are mumbled by him, they are prayers; whatever he sees, are meditation on vishNu; whichever water comes into contact with his feet, becomes incomparable thIrtham (sacred water); the food that remains after he has eaten, is sanctified; his every word becomes a manthra (vEdhic hymn); everything he touches becomes purified). Thus SAsthrams also spoke high of pOnaga sEdam. If emperumAn’s prasAdham (grace) is pAvanam (purifying), the prasAdham of his followers is supAvanam (very purifying).

We shall move on to the 42nd pAsuram.