In those previous pAsurams – that emperumAnAr won over the bad philosophies, and that he brought out the true greatness of vEdhas, and that he is immersed in AzhvAr’s aruLichcheyal (dhivya prabandhams); so after that, is it not imperative to talk about what happened to those bad philosophies, vEdhas, and AzhvAr’s aruLichcheyal?  amudhanAr replies, that the other bad philosophies got destroyed right from the root, vEdham lived well in the world and is proud like ‘enakku Arum nigar illai’ (no one is equal to me), and all aruLichcheyal are growing every day for the betterment of everyone (to reach the true goal).

Involving well with lowly sentient, without seeing his own greatness or their lowliness,
maN ulagil – in the world
eettiya –  with more and more accumulated
seelaththu – greatness of interacting easily with lowly ones,
iyalvu kaNdu – seeing such nature of
irAmAnusan than – emperumAnAr –
like how upon seeing the sun the darkness would vanish and lotus petals would open up,
nAttiya – those that were established based on own ideas
neesam – which are lowly due to being outside of following vEdhas,
samayangaL mANdana – such philosophies died;
since it talks in the first part about the nature of worshipping, and in the second part about the nature of one worshiped,
kAttiya vEdham – such vEdham which highlighted
nAraNanai – sarvESvaran who is the lord of both the worlds, as said in ‘vEdhaiScha sarvai: aham Eva vEdhya:’ ,
kaLippuRRadhu – that vEdham felt proud that there is no problem anymore for it;
then – distinguished in every which way
kurugai – one having thirunagari as his residence,
and who helped the world through his words that are outlet of his experience of emperumAn,
vaLLAl – such generous AzhvAr’s (words),
since it cannot be moved from its strong position by those who are not with vEdhas,
vAttamilA – that which is being without any blemish
and which can give everything from knowledge, up to liberation,
vaN – and having such generosity
thamizh maRai – that is the thamizh vEdham, thiruvAimozhi,
vAzhndhadhu – got the wealth of its intent being fulfilled (due to emperumAnAr).

maN ulagil – in this world that grows ignorance;

eettiya seelaththu –  without considering his greatness of getting the wealth of both the worlds, and without seeing the lowliness of the worldly people, he who in thirukkOshtiyUr without any partiality of young or old, for everyone, he gave out the meanings of charama SlOkam which he obtained with at most difficulty; and he easily interacting with and accepting ones like kongil pirAtti, and a cowherd girl in rettaith thiruppathi (dhivya dhEsam near AzhwArthirunagari), a cowherd in the forest when he visited mEl nAdu (thirunArAyaNapuram), and with others like the dumb person, and so on, and thus got more and more accumulation of his generous quality;

iyalvu kaNdu – seeing his nature like winning over the people of other philosophies, and establishing the correct path of dharma,

ALavandhAr, in the assembly of chOzha king debated with those who sided with rudhran, won them, and got half the kingdom;

here, unlike that, during the time he was living here, a king who is not worth naming had tried to establish in this world by writing ‘SivAth paratharam nAsthi’, and had been malicious towards emperumAn and His devotees, and had died of worm infection in his neck as said in ‘neesarum mANdanar’, without emperumAnAr taking any efforts but just by seeing emperumAnAr’s unparalleled greatness;

and, from kALahasthi , Saivas had come as a big group and had squatted saying that thiruvEnkatamudaiyAn  was their kandha nAyanAr (muruga, skandha), and they could not be shunned even by the king yAdhava rAyan, and so they had taken over the thirumalai (thiruppathi);  at that time, due to thiruvEnkatamudhaiyAn pursuing him, emperumAnAr divined his visit there and made them losers and they went away losing their heads, and

in mEl nAdu (mElkOte / thirunArAyaNapuram), at the time when bhaudhdhars had established themselves there and even the king there had been their disciple, and no one different could be seen there, when emperumAnAr had been there by coincidence and was present there for some time, that king had seen his greatness and had arranged the debate of those others with emperumAnAr and saw their self-imagined and disillusioned arguments, and also emperumAnAr’s good words, and got convinced and surrendered to emperumAnAr’s divine feet, and won the baudhdhars and jainars’ who were well rooted even during the time of bhAttAchAryan, and made that place to be void of those lowly philosophies ever,

– these are all well known about emperumAnAr.

nAttiya, etc., – Like the darkness dies down upon the rise of sun, seeing emperumAnAr’s greatness, without debates using references (pramANam), those which were established based on their own false ideas, and which were very hard to be removed, and which were most lowly due to not following the vEdhas – such philosophies not based on vEdhas were eradicated to the root;

and starting with ‘nArAyaNAth brahma jAyathE’, with very many ways showing the supremacy of nArAyaNan, such vEdham, considering the first and second parts, in the first part shows the ways of worshipping and accompanying actions, and in the 2nd part explains the means and destiny as being the one to be worshipped – emperumAnAr established the connection of these two parts as one unified word of vEdhas, and established it AsEthu himAchalam (all over the place, from sEthu bridge in south to himalAya in north), and due to that, the vEdhas realized that there is no problem for them anymore, and so with full brightness, was proud and living happily in this world;

due to enjoying the greatness of emperumAn and due to the overwhelming force of that experience, and so in the form of that experience, his words that he himself appreciates as ‘mozhi pattOdum kavi amudhin nugarchchi uRumO muzhudhumE [thiruvAimozhi – 8.10.5]’ ((would paramapadham, material pleasures, kaivalyam, etc) equal the pleasure of enjoying with other devotees, the words coming from me due to overflowing love towards emperumAn?)), he gave those prabandhams to the whole world to be fully accessible, such generous nammAzhvAr’s prabandham, which could not be shaken by those of other philosophies and those who misinterpret the vEdhas, and so the prabandhams  being without any illness, 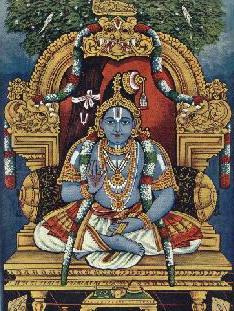 and it gives the destiny of this world as said in ‘nalla padhaththAl manai vAzhvar koNda peNdir makkaLE [thiruvAimozhi – 8.10.11]’ (will live as a married one with family, and with devotion towards His devotees),

and gives the ultimate destiny of the other world as said in ‘niraniRai Ayiraththu ivai paththum veedE [thiruvAimozhi – 1.1.11]’ (enriched/complete due to the words, meanings, tunes, music, etc., coming together, these 10 pAsurams which reveal His supremacy (vidappattana – submitted) offered to the lotus feet of emperumAn. Since these 10 pAsurams lead one to mOksham, vIdE (vIdu = mOksham in thamizh) can also be taken as indicating the ultimate destiny), and ‘ivai paththum pidiththAr pidiththAr veeRRirundhu periya vAnuL nilAvuvarE [thiruvAimozhi – 6.10.11]’ (those who take in these 10 pAsurams (about thiruvEnkatam) either directly or through lineage, would firmly be in paramAkASam that is, paramapadham), and ‘avAvil anthAdhi ippaththaRindhAr piRandhAr uyarndhE [thiruvAimozhi – 10.10.11]’ (Those who learn and pursue this anthAdhi (thamizh poetry form of starting with the ending part of previous pAsuram), would be noble even while being born in this material world) – thamizh vEdham that is thiruvAimozhi which is having such generosity,  had become bright and established for all the prapannas (SrIvaishNavas) to be able to do mangaLASAsanam (wishing, long live), as said in ‘SatakOpan thaN thamizh nUl vAzha [prathivAdhi bhayankaram aNNan’s vAzhi thirunAmam of maNavALa mAmunigaL)’ (~ for the well-being of SatakOpan’s enjoyable thamizh prabandham).

nAttiya … samayangaL mANdana – other philosophies did not have a good basis for standing; they had to be propped up by people who came up with their own ideas and explanations. emperumAnAr kept the true meanings of vEdhas as reference and so those other philosophies died.

then kurugai … vAzhndhadhu – unlike vEdhas, thiruvAimozhi does not have the blemish of others finding wrong meanings to it, and to show that, amudhanAr is saying vAttamilA maRai.

maNNulagil … iyalvu kaNdE – with his quality of interacting easily with the lowly ones and bringing them under his lordship, the lowly philosophies did not find a place in them too and those philosophies died away.