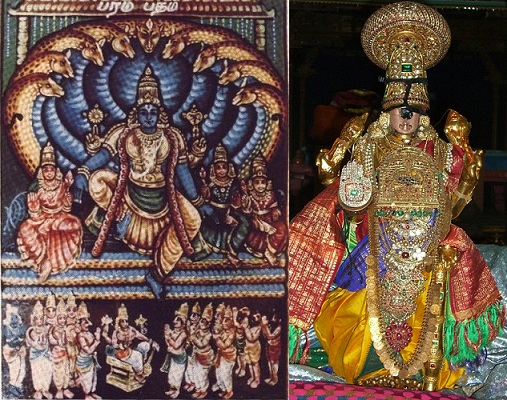 In ninth pAsuram – when asked “For us, emperumAn‘s presence in SrIvaikuNtam is incomprehensible. We were not favoured by him when he descended with utmost simplicity in many incarnations. How will we approach him?”, AzhwAr says “You approach him requesting him to be present in a form you desire [archA (deity) form]; since it is too easy for the devotees to approach, he likes such form as much as he likes his spiritual divine form”.

Subsequently, AzhwAr says “Instead of shying away from emperumAn thinking ‘parathvam (supremacy) and incarnations are unreachable for us’, you take shelter of archAvathAra emperumAn who is present to be easily approached by those are after the time of incarnations and who is all types of relationships for you”.

See nanjIyar‘s introduction. This pAsuram is the main one for this decad.

thanjam Agiya – being the refuge (unlike biological mother and father who may abandon their child in specific situations, emperumAn who will never abandon)
thandhai thAyodu – (due to seeking for the well-being and to fulfil the desires) being father and mother, with them
thAnum Ay – being self (who will always seek out the well-being of oneself)
avai allan Ay – not just that, being all types of relation
enjal il – those who have no limit in their experience
amarar kula mudhal – being the cause for the existence of nithyasUris
mUvar tham uLLum – in the trio of primary deities namely brahmA et al
Adhiyai – to hold on to the principal one
ulagaththu uLLIrgaL – worldly people
nIr – you
anji – (looking at his supremacy) being afraid
avan – he (who is having unlimited greatness [such bhagavAn in paramapadham])
ivan – him (who assumed the [archA/deity] form which we desired)
enRu – thinking of superiority and inferiority [of these forms]
kUzhEnmin – instead of doubting (if he is to be surrendered to or not?)
nenjinAl – with the heart
ninaippAn – thought about and joyfully consecrated
yavan – that emperumAn
avan – him
kadal – like ocean
nIL – vast/boundless
vaNNan – sarvESvaran, having such nature
Agum – he is.

emperumAn is the refuge, father and mother, along with them, the self and not just that, he is all types of relation; he is the cause for the existence of nithyasUris who have no limit in their experience and is the principal one in the trio of primary deities namely brahmA et al; Oh worldly people! instead of doubting if he (who is the supreme person is the same in deity form) is to be surrendered unto or not due to considering them [those forms] superior [bhagavAn in paramapadham] and inferior [bhagavAn in deity form], [know that] he who is thought about and joyfully consecrated [in deity form] is the same sarvESvaran who has ocean-like vast nature.

It is to be understood that inside the deity that is worshippable, bhagavAn (in the form of paramapadhanAthan) who is the goal is present.