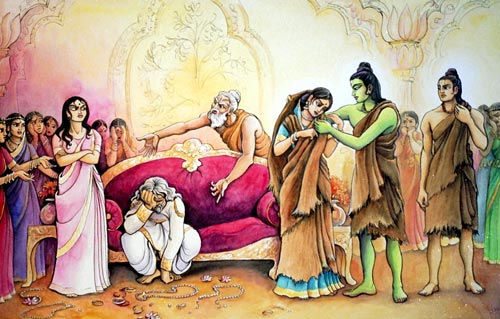 In eighth pAsuram – AzhwAr explains his own philosophy [conviction] to help others [samsAris (materialistic persons)] know about it and develop taste in it saying “I will not consider any one other than [SrI rAma, ] the son of dhaSaratha chakravarthi as my Apadhdhanam (wealth during hard times)”

Subsequently, AzhwAr says “there is no refuge other than the son of dhaSaratha chakravarthi who never abandons his devotees”.

thuyaramE tharu – that which will give (exclusive distress)
thunbam – sorrows
inbam – cause for happiness (which is also exclusive distress since it is attained by difficult process, the resulting happiness is missed with distress, is ultimately ending with distress)
vinaigaLAy – being the controller of karmas in the form of puNya (virtue) and pApa (vice)
avai – by them
allanAy – not being bound
uyara – having greatness (as said in chAndhOgya upanishath “viSwatha: prushtEshu sarvatha: prushtEshu” (paramapadham which is greater than vyashti srushti and samashti srushti))
ninRadhu Or – eternal, unparalleled
sOdhiyAy – having a divine body which is filled with radiance
ulagu Ezhum – when all the worlds (which are bound by karma) are endangered during deluge
uNdu – consuming them
umizhndhAn thannai – one who [subsequently] lets them out and protects them
ayara – for the bewilderment
vAngum – take away the life
naman thamarkku – for the servitors of yama
aru – difficult to rescue
nanjinai – being poison
achchudhan thannai  – one who is having the nature of not abandoning his devotees
thayaradhaRku magan thannai – SrI rAma, the son of dhaSaratha chakravarthi
anRi – other than him
maRRu – any one, even another form of bhagavAn
thanjamAga ilEn – will not have as my refuge

emperumAn is the controller of karmas in the form of puNya (virtue) and pApa (vice) which will give (exclusive distress) out of happiness (which is also exclusive distress since it is attained by difficult process, the resulting happiness is missed with distress, is ultimately ending with distress) and sorrow; [yet] he is not bound by them [karmas]; he is having a divine body which is filled with radiance, is eternal, unparalleled and  having greatness; when all the worlds (which are bound by karma) are endangered during deluge, he consumes them and [subsequently] lets them out and protects them; he is the poison which is difficult to rescue for the servitors of yama who take away the life for the bewilderment [of AthmAs] and hence having the nature of not abandoning his devotees; other than such SrI rAma, who appeared as the son of dhaSarathi chakravarthi, I will not have any one, even another form of bhagavAn, as my refuge. thanjam – being a companion when one is in danger.

Where did we see such act from emperumAn?

emperumAnAr had veNNeykkAdum piLLai (nardhana krishNa – krishNa who would dance for butter) in his thiruvArAdhanam (personal worship); one day, a SrIvaishNava brought a deity of chakravarthith thirumagan (SrI rAma) and presented the same to emperumAnAr; seeing him, emperumAnAr said “one who did not demand ‘mAmEkam SaraNam vraja‘ (surrender unto me only), has arrived). [Generally Abhimukhyam [being friendly] in the form of allowing emperumAn to protect/rescue us, is explained as prapaththi.] When we look at Abhimukhyam as the cause [for emperumAn’s protection], for the chEthana [who is bound in this material realm], even such Abhimukhyam is as difficult as parama bhakthi to perform – so saying “there is nothing more than Abhimukhyam which is needed in him” is due to the simplicity [magnanimity] of SaraNyan (emperumAn who is giving shelter); but if we look at what is required, it is explained as “mAhaviSvAsa pUrvakam” (with complete faith). [Would we need such faith as a prerequisite on our side?] When some one goes on a sea voyage, he has faith in the ship and carries food, water etc in the hope of managing with that for six months; for those who surrender to bhagavAn, would they at least not need such faith?”.