One of the gOpikAs of AyppAdi who has joined to go for the nOnbu asks, “We are so eagerly preparing for the nOnbu; will we be able to complete it without any problems? Wouldn’t the karmAs that we have accumulated over all these births give us difficulties and prevent us from completing this nOnbu (getting together with krishNan)?  vasishtar, such a great gyAni, prepared and planned for the pattAbishekam of srI rAman to become the king, but that did not happen at that time. We are such small people compared to him; how will our plans for nOnbu be completed?

One of the girls who has the gyAnam (knowledge) on vEdhas replies as this pAsuram: “it is not that we have to get rid of all the pApams/karmA before we start this nOnbu; if we want bhagavath anubhavam (experiencing togetherness with and kainkaryam to krishNan), these karmAs will go away by themselves; if we do kainkaryam (mAnasa, vAchika, kAyika) and SaraNAgathy, all the pApams will go away by themselves; so do not hesitate or discontinue by thinking about our ineligibility or karmAs. Say the name of krishNan (who is described in this pAsuram), then all the previous karmAs, and, all the new karmAs will burn to ashes like cotton balls in fire. It is similar to how the illness go away when someone happily drinks milk mixed with medicines in it.”

(krishNan did not care about his promise of not using any weapon during the kurukshEthra war  when bhIshma attacked arjuna;  sr rAmar without getting crowned went to the forest in order for mahArAjar (sukrIvar) and vibIshanAzhvAn to get their crowns. For the saraNAgathAs (those who have surrendered to Him, associated with Him), He will change our karmAs and help us be with Him and do kainkaryams).

In the case of vasishtar, he did the planning – in our case we have left it to krishNan to help us complete this nOnbu – if krishNan plans then it will succeed.

This pAsuram has the inner meaning related to samAsrayaNam.

mAyanai – one who performs wonderful deeds
mannu vada-madhurai maindhanai – king of vadamadhurai that is having ever present bhagavath sambandham
thUya peru nIr – one having divine and ever deep water
yamunai thuraivanai – who plays in the bank of river yamunA
Ayar kulaththinil thOnRum – who was born in the cowherd group
aNi viLakkai – who is like a divine dheepam (lamp),
thAyaik kudal viLakkam seidha – who made his mother yasodhA’s womb meaningful
dhAmOdharanai – emperumAn who let himself be tied by a small rope,
nAm – we who are open to Him approaching us
thUyOmAi vandhu – [to such emperumAn] (we) came with purity
thU malar thUvi – submit good flowers,
thozhudhu – and prostrate,
vAyinAl pAdi – sing his names to our mouth’s content,
manaththinAl sindhikka – meditate in our mind;
pOya pizhaiyum – and the pApams that we committed (before getting bhagavath sambandham)
pugu-tharuvAn ninRanavum – (after such sambandham, the) pApams that we commit without realizing
thIyinil thUsAgum – will all burn away like the cotton placed in fire
seppu – so, sing His names.

Continuing with previous pAsurams in which they sang about perumAn in different lOkams/avathArams/dhivya dhEsams, here they are singing about the mAyan that is referring to srIvaikuNtanAthan in paramapadham. This is parathvam (his Supremacy, one of his kalyANa guNas (auspcious qualities)).

perumAn who happily lives in srIvaikuNtam, with so much of aiSvaryam that the dhEvAs find it hard to see Him directly, it is hard to explain or think about, He is such a mAyan; He has now come, and stayed here in dhEvaki’s womb for 12 months, and as a boy He is playing with all gOpikAs and cows – that is the paramapadhanAthan’s simplicity (sowlabhyam).

He was born here as krishNan with his changu and chakram.

(To avoid being scared of His parathvam, one thinks of His sowlabhyam; in order to avoid belittling His simplicity, one contemplates His parathvam).

mannu – mathurApurI, has always had perumAn‘s sambhandam. srI vAmana avathAram did a long penance in this place of sidhdhASramam; chathrugnAzhvAn took care ruling this place after winning lavaNAsura and other asurAs, and so perumAL is fond of this place; (now krishNan – for butter, ghee, milk, and, the gopikAs).

maindhanai  – (say the name of the) ‘son’ (krishNan) who is having majesty/strength.

(talk/sing the glory of) krishNa (avathAram) who had the strength by which He removed the chains on His parents’ legs; He is the king; showed His beauty and pulled everyone to His side; smart. Becoming younger every day because of happily helping the gOpars.

This great yamunai river can even let us forget about the virajA river (which is the river one crosses near srI vaikuntam in order to go into srI vaikuntam); when vasudhEvar wanted to cross the yamunai river to go to thiru-AyppAdi, she after touching krishNan’s lotus feet gave way for vashudhEvar;

With krishNan and gOpikAs doing rAsakrIdai (play in the water) in the yamunai river, playing near it, gurgling and spitting in it, this river has become clean/pristine as well. (thUya).

(This is unlike river gOdhAvari which due to fear of rAvaNA, did not reveal that sIthA pirAtti was taken by rAvaNA, even though thAyAr had requested the river to inform rAma).

yamunaith thuRaivan – rAsakrIdai happened in this place; this is where gOpikAs get into trouble by krishNan; His identity is associated with the banks of yamunA.

thuRaivan – the lead (krishNan) of that land; leader of the AyppAdi girls;

==> AchAryan srI parAsara bhattar said: They are referring to krishNan indirectly by saying yamunaith thuRaivanai because the thiru-AyppAdi gOpikAs are afraid that if they said the name krishNan then kamsan might hear it and cause danger to Him. 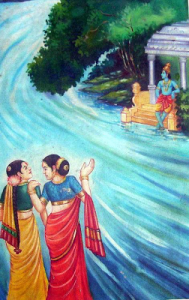 Having mentioned ‘mAyan’ above in this pAsuram to imply perumAn in paramapatham, now ANdAL is implying that krishNan in their cowherd crowd is better in displaying His guNams – like the brightness of a lamp in a dark room; this also matches with ‘vada madhurai maindhanai‘ of this pAsuram;

(thOnRum) He does not have the limit of being born out of a womb.

Ayar kulam – all the bhagavatha group who consider only Him as their means (to attain Him).

People appreciate his mother yasOdhai for giving birth from her womb to such a wonderful child; the child got that good name for his mother;

Women would have lines in their stomach after giving birth – here yasOdhai is having such lines which is a great mark for having given birth to krishNan.

dhAmOdharanai: tied by the தாம்புக் கயிறு –  by letting her mother tie him with the rope, he got the people to appreciate yasOdhai for giving birth to such a wonderful obedient child.

dhAmOdharanai: because of tying the rope in his hip, the marks are always present on krishNan. When he jumps from one branch to another while playing, his dress moves aside and the gOpikAs look at those marks and make fun of him; that is why namperumAL (uthsavar, srIrangam, who is kaNNan himself) is always wearing dhOti around his hip (to hide the lines/marks) – said AchAryan nanjIyar.

If we think of this simplicity of him, then the ties of our samsAram would be removed.

The marks that sEshans (who have done bhaghavath samAsrayaNam) have their marks on their shoulders (கோயிற் பொறியாலே ஒற்றுண்டு); the sEshi (perumAn to whom we are sEshans) has got his marks from the rope as he allows himself to be tied by the sEshans’ bhakthi;  he shows his marks and gets us to have and show our marks (in our shoulders) – said bhattar.

The gOpikai with the vEdha gyAnam says this: Do not see whether we are eligible/good enough to go and do the nOnbu, to be with krishNan, to do samAsrayaNam through AchAryan; Willing to come as you are is good enough, no need to search for any purity than that, because bhagavath sambandham (association with perumAn) does not concern your purity.

AyppAdi people don’t know how to fully bathe and keep themselves clean; they are purer with krishNan’s friendship.

(vandhu nAm) – the norm is for Him (krishNan) to come to us and save us from this samsAram, but he will see us coming to him.

perumAL told guhan that He himself should have come to meet him instead of guhan coming to Him; he told that he feels ashamed for letting the dhandakAraNya rishis (in the forest) come see Him instead of him readily going t them and taking care of their problems;

so why should the gOpikAs go to him instead of waiting for him to come?  When being confident about upAyam (the means – perumAn; he is the means, so he should try to come and save us) it makes one think to stay put and wait for him;  the desperation about reaching upEyam (goal/destiny – that is also perumAn) makes us to go to Him if he has not yet showed up.
thU(ya) malar – (thUya: pure/noble;  malar: flower) – The flowers given for kainkaryam without expecting anything in return (ananya-prayOjanam); not bought from the store in a plantain leaf, but by getting the flowers and putting some small effort to make it;

Like mAlAkArar’s flowers that he gave to krishNan in vada-madhurai.

perumAn also does not see what we give, but sees the affection in our heart for him.

pathram pushpam…   He does not see the size of our kainkaryam because there is nothing that is too big in this world for him, and mainly because no kainkaryam is small for him. He only sees our affection/bhakthi/care.

thUvi – sprinkle/throw the flower in his lotus feet (without worrying about the procedure?).  [kAyika kainkaryam (one of the 3 types of kainkaryams)]. Can they throw the flowers like that instead of properly submitting them to Him? Their love for Him makes them not consider these formalities;

like how ALavandhAr also said that we do anjali just once with our hands without even properly putting them together (கோணல் மாணலாக ஒரு முறை பண்ணிய அஞ்சலி), and perumAn accepts even that as an anjali and his heart melts for us.

thozhudhu – do anjali (joining both the hands, kai kooppi) – offering ourselves – such that He would melt by seeing our affection. The reason for / use of, being born with our arms and hands (is to do anjali).

dhraupadhi’s anjali made krishNan feel so much indebted that he was never satisfied even after helping her so much;

Because he is such lover of us heroines, he would want to do anjali to us; or if He does Anjali and we the gOpikAs don’t reciprocate, then the gOpars would fear that this nOnbu is not happening appropriately; so for their sake the gOpikAs do the anjali.

In addition to going to you, we also sang your names;

Everything starts with thinking in the manas, but we praise you with all three apparatus, hands, mouth, and manas; our hands and mouth are going to you ahead of manas – such is our eagerness.

manaththinAl sindhikka – The use of having our manas (mind/thoughts). [mAnasa kainkaryam]. It is important to use the mind when singing His names.

So it is talking about using all the three (hands, mouth, and mind) equipment and falling on him.

….. (pApams) will vanish like how the cotton (ball) will burn in the fire and vanish.

If we regularly drink milk containing all the required medicinal items we will get rid of ailments. In the same way, as we keep doing bhagavath anubhavam, all our pApams would vanish.