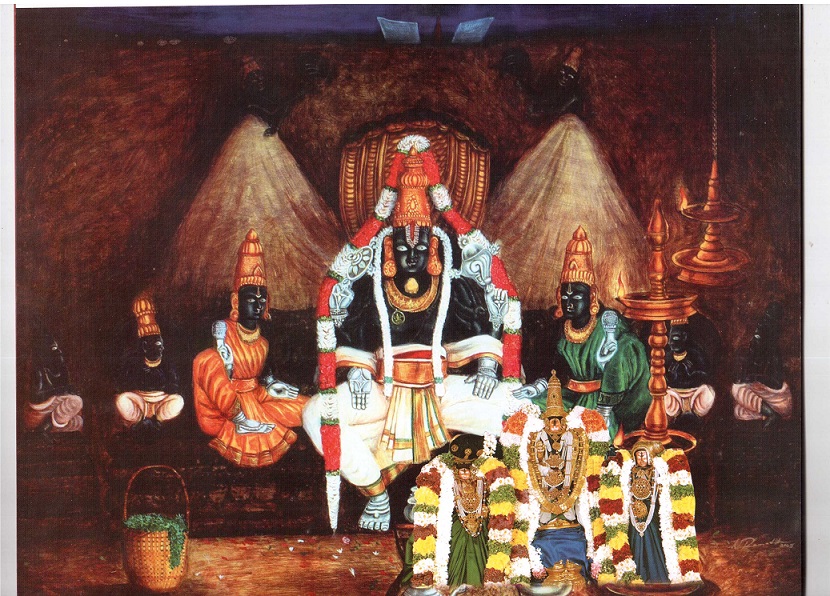 While emperumAn would protect even those who have a little bit of attachment towards him, AzhwAr was wondering why he did not come and protect him. He thought that emperumAn may be thinking that AzhwAr is pursuing some means on his own and hence AzhwAr announced his inferior nature and lack of any other means and performs SaraNAgathi to vAnamAmalai emperumAn in this decad.

First pAsuram. AzhwAr says “I am devoid of upAyams mentioned in SAsthram to attain you, and cannot survive without you; am I outside your purview with you being one who favours being together with your devotees and who is ready to help others?”.

I have not performed karma yOgam to attain the result; I have not performed gyAna yOgam which is in subtle form and is focussed on knowledge about self and god; though not having bhakthi yOgam which is possible by having these two, i.e., karma yOgam and gyAna yOgam, I am unable to survive even for a moment without you after meditating upon your qualities. Oh benefactor for me who is seated in a distinguished manner manifesting your readiness to protect well your devotees in SrIvaramangala nagar [vAnamAmalai/thOthAdhri, also known as nAngunEri] where attractive lotus flower is blossoming while being mingled with paddy crop in muddy fields! In your presence there, I am not an outsider to the savable souls who are to be saved by you who are the saviour.

Second pAsuram. AzhwAr says “If there are hurdles in attaining your divine feet, you have to remove those yourself and protect me out of your own mercy”.

I have not entered into your apt abode, having you as ready means. I am not remaining patiently where I am now. Being captivated in love to enjoy you, I am not present in the state of worldly people too. Oh my distinguished lord who destroyed lankA which was a hurdle for your devotee (sIthAp pirAtti) and attained her! Oh one who is having special weapons which are both meant to destroy the enemies of the devotees and being enjoyable for the devotees and who is residing eternally in SrIvaramangala nagar which has rising mansions which are with abundance of emeralds and reach up to the moon! Mercifully bless me who is lonely without anyone other than you as companion.

Third pAsuram. AzhwAr says “I have not done any favour in return for your favour of accepting me and engaging me in service of you who have distinguished symbols which manifest your supremacy”.

emperumAn is having garuda bird as his flag, divine chakra as his weapon and paramapadham as his kingdom; he is having a dark cloud like form which he bestowed to me; with that form, he transformed me who cannot be considered as an entity as said in “asannEva” (like achith) to realise my nature; he acknowledged and accepted my vAchika kainkaryam. Oh you, who are residing in SrIvaramangala nagar where many who have mastered the four vEdhams, having great knowledge, are living and showed your mercy there; I do not know of any gratitude, return of your favour, which I have done.

Fourth pAsuram. AzhwAr says “How can I attain you who are the saviour of your devotees, through my desire as means?”

Being great benefactor, back when dhuryOdhana et al were inimical towards pANdavas, you performed the battle with amazing acts with determination to help the lonely pANdavas and kill dhuryOdhana et al and changed them to dust; being the lord you lifted bhUmi up during the danger of total deluge. Oh one who entered SrIvaramangala nagar where worship of bhagavAn is performed continuously as per vEdham by those who have clear knowledge, and is present there showing distinction! [without your help] How will I call out for you and attain you?

Does it match me to consider my desire as means to attain you? Oh lord who assumed the forms such as budhdha et al and mingled and stood amidst any type of demoniac groups who are inimical, and performed deceptive acts and who is having dark forms! You remained as the master of those who are kruthakruthya [those who have completed what is said in vEdhas to be done] and are comparable to nithyasUris on earth and are living without any break in SrIvaramangala nagar dhivyadhESam and to be served by all of them; I too have seen that presence. It is implied by AzhwAr “Hence, it is your duty to remove my hurdles and make me enjoy you”.

Sixth pAsuram. AzhwAr says “You who are greatly shining due to helping your devotee, should mercifully come for me to enjoy you and serve you”.

emperumAn being a benefactor for me by assuming the form of a varAha and digging out the earth, and as krishNa; being the lord and accepting my service to make me sustain myself,  through speech which is as enjoyable as the bliss of paramapadham; having greatly shining radiance like a distinguished carbuncle, eternally residing in SrIvaramangala nagar which is having invigorating, honey bearing mango groves, to be served by the residents of the dhivyadhESam. Oh one who is having a firm form resembling a boundless mountain to be enjoyed by the residents of paramavyOma [SrIvaikuNtam]! Mercifully giving up that posture, come to me so that I, who am a servitor, can serve you.

Seventh pAsuram. AzhwAr says “You who are total cause for my sustenance, should not separate from me and destroy my existence”.

emperumAn mercifully arrives and has my heart as his residence and cares for my sustenance and increases the sustenance of the residents of paramapadham; he is the distinct primordial mother and father for this world; he consumed all the worlds, placed them in his stomach and protected them. Oh emperumAn who is having such endless great qualities, who is residing in SrIvaramangala nagar where continuous worship of bhagavAn as per vEdham, is performed by those who are having honesty of existing for him only, in the form of engaging in kainkaryam! Do not shun me.

Eighth pAsuram. emperumAn asks “Did I banish you?” and AzhwAr replies “You have placed me in this samsAram where the worldly pleasures such as Sabdha (sound) etc are active; is that not an act of banishing?”

I have truly well understood the senses which are created by you, having amazing nature (of not mixing with each other) and not defeatable, to banish those who are turning away from you. I am fearing that you are pushing me away into the difficult mud. Oh controller of sirIvararamangai dhivyadhESam, which is having tall mansions with carbuncles which are having shining light! Oh one who being my lord, tore bakAsura’s beak and who is difficult to enter! Implies that – AzhwAr is saying “though emperumAn is omnipotent in this manner, he did not help me and is pushing me away”.

Ninth pAsuram. AzhwAr says to emperumAn “you who are shining very radiantly due to destroying your enemies, should mercifully uplift me”.

You (emperumAn), the amazing person, revealed confidential aspects by killing bakAsura, yamaLa and arjuna and seven bulls; you are having the beautiful shining form like a blackish carbuncle. Oh benefactor who are mercifully present to let me enjoy you, inside the invigorating sirIvaramangai dhivyadhESam which is populated by those who are having clarity and expertise in the essence of four vEdhams (to have them at their disposal) which is having the wealth that provides access to bhagavAn’s true nature etc! For me, having no other refuge, mercifully bestow the means to make me attain your divine feet and have me uplifted.

Tenth pAsuram. emperumAn shows to AzhwAr “My divine feet are the means to attain me” and  AzhwAr says “I cannot do anything in return for this favour”.

Oh leader of nithyasUris who is in sirIvaramangai dhivyadhESam which has sugarcane and tall paddy crop in muddy field, wearing divine crown which is decorated with fresh invigorating thuLasi! You (emperumAn) have bestowed on me your divine feet only which are the means to attain the goal, as the upAyam (means) which is the refuge; I do not have anything to give you in return and my AthmA is yours.

Eleventh pAsuram. AzhwAr says “those who recite this decad with intent and joy, will be always enjoyed by nithyasUris”.

sarvESvaran who is the leader of nithyasUris, having motherly forbearance due to unconditional relationship, measures [and accepts] his subordinate entities so that they don’t develop ownership; nammAzhwAr, leader of AzhwArthirunagari which is surrounded by abundant flowers ready to be plucked, mercifully spoke on the divine feet of such emperumAn, these ten pAsurams among the thousand pAsurams, aimed at the invigorating sirIvaramangai dhivyadhESam; those who can sing this decad agreeing with its meanings, will always be eternally enjoyable like never-satisfying nectar, for the residents of paramapadham.