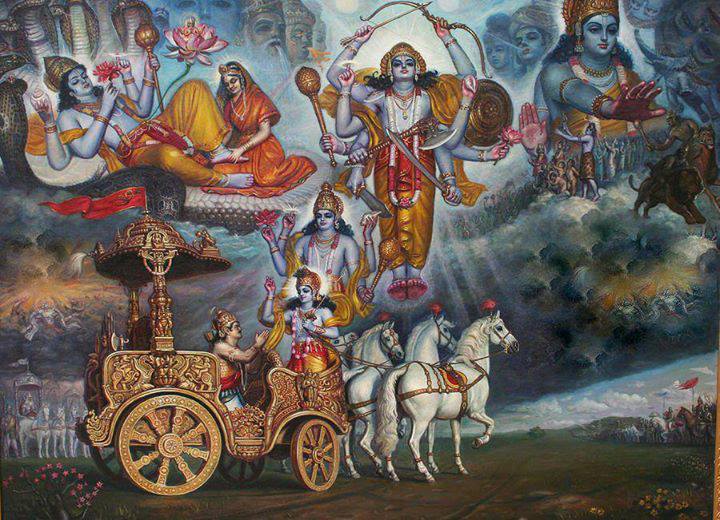 bhagavAn has said thus to the yAdhavas in many instances:  “I have born in your womb…”, “Know me as your close relative…”, etc.

As seen in these words, bhagavAn didn’t incarnate as krishNa just for the sake of it, with all hypocrisy. Rather, he heartily took birth in the clan of yAdhavas, and identified himself very closely with them as the son of vasudhEva, a close associate of the cowherd folks, etc.

Thus, he is called ‘sathyamEdhA:’ – the one with an honest mind.

bhagavAn himself says thus to the cowherd folks:

Etymology: He, who is honest in his heart in identifying himself with the cowherd folks, vasudhEva, and others, is called ‘sathyamEdhA:’.

When indhra got angry at krishNa for taking away his share of food and started raining hailstones (some say only ‘stones’), bhagavAn decided to protect the innocent cowherds.

“bhagavAn then decided that he must protect the cowherds from the onset of hail rains. He thus decided to daringly lift the mountain which was next to them (gOvardhana) and hold it as an umbrella under which all the cowherds could seek shelter from the rain.”

Thus, bhagavAn lifted the gOvardhana mountain, which is why he is called ‘dharAdhara:’ – the one who holds the mountain.

Etymology: The one who instantly bore the gOvardhana mountain (with his little finger) is called ‘dharAdhara:’.

In this way, bhagavAn showers his effulgence in the form of protection of his devotees. Thus, he is called ‘thEjOvrusha:’.

Etymology: bhagavAn is called ‘thEjOvrusha:’, since he showers his divine effulgence in the form of protection of his devotees. This eight lettered manthra bestows kinsmen among the chanters.

For the same reason (of showering effulgence in the form of protection of his devotees), bhagavAn possesses extraordinary effulgence which can even pacify the ego of indhra although krishNa is in his youth. Thus, he is called ‘dhyuthidhara:’.

Etymology: The one who possesses extraordinary effulgence that can tame even the egotistic feeling of indhra is popularly called ‘dhyuthidhara:’. This eight lettered manthra confers effulgence upon the seekers.

The vishNu purANa hails thus: “That act of wielding various kinds of weapons at his enemies is a divine sport of that lord of all worlds in his human incarnation”

Etymology: He, who proved to be the best amongst all wielders of various weapons in fighting against jarAsandha and others, is popular in all worlds as ‘sarvaSasthrabhruthAm vara:’.

Without even depending on arjuna’s valour, bhagavAn oppressed the entire enemy camp single handed – just by his skilful charioteering. Thus, he is called ‘nigraha:’ – the oppressor of all enemies.

Etymology: He – by whom the enemies were subdued by mere virtue of skilful charioteering – is called ‘nigraha:’. This seven lettered manthra destroys all enemies of the chanter.

bhagavAn is called ‘vyagra:’ because he was impatient to wait till arjuna fought the battle and destroyed his enemies. The root ‘aga’ (अग) means to traverse a crooked path. It gets the ‘ran’ (रन्) adjunct and the ‘vi’ (वि) upasarga, resulting in this divine name. This means bhagavAn took to alternate ways to destroy the enemies in the battle.

This is shown in SrI mahAbharatha; where bhagavAn himself says thus while charging towards bhIshma:

“Oh sAthyaki! Those who are gone are gone forever. Those who are remaining here shall also go soon. Now behold bhIshma who shall fall from his chariot giving away to my charge. Also see for yourself how dhrONa and others shall be busted by me in this battle”.

Having said thus, bhagavAn jumped from his chariot leaving the reins of the horses. He took the mighty chakra in his hands and charged towards bhIshma and others.

Etymology: He who was impatient to wait till arjuna fought the battle to win over his enemies (and who himself jumped into the war field to ruin the enemy camp) is called ‘vyagra:’. This six syllable manthra destroys all enemies of the chanter.

bhagavAn possessed a multitude of means of oppressing the enemies in the battlefield, such as his intellect, his charioteering skills, his vow of never taking up any weapon on the war field, yet taking up his chakrAyudha when needed, etc. In this way, he took to several ways of defeating the enemies of his dear devotees. Thus, he is called ‘naikaSrunga:’ – the one who has a multitude of oppressing ways.

Etymology: He is called ‘naikaSrunga:’, who possesses a multitude of ways of oppressing his enemies.

bhagavAn krishNa was born as the elder brother of gadha (गदः), who was the son of vasudhEva and sunAmA. Thus, he is called ‘gadhAgraja:’.

Etymology: Since bhagavAn was the elder brother of a person named ‘gadha’, he is called ‘gadhAgraja:’.